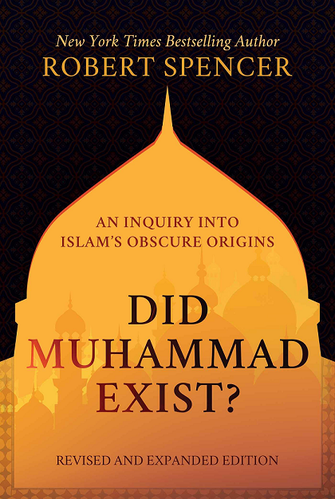 “A thorough review of the historical records provides startling indications that much, if not all, of what we know about Muhammad is legend, not historical fact,” writes Robert Spencer in his new edition of Did Muhammad Exist? An Inquiry into Islam’s Obscure Origins. Therein this bestselling author, scholar, and world-renowned “Islamophobe” details numerous factual, fatal objections to the received faith-based narrative of Islam’s founding by a prophet named Muhammad.

Spencer surveys the historical record of various of various societies like the Byzantine Empire that bore the brunt of Arab invasions in the Middle East and North Africa following Muhammad’s supposed death in 632. The surprising documentary result:

No one who interacted with those who conquered the Middle East in the middle of the seventh century ever seems to have gotten the impression that a prophet named Muhammad, whose followers burst from Arabia bearing a new holy book and a new creed, was behind the conquests.

Spencer notes that “this silence is extremely strange. Islam, in its canonical texts, is an unapologetically supremacist religion.” Tellingly, “coins minted in the 650s and possibly as late as the 670s” by early Islamic caliphs like the Damascus-based Umayyads make no “reference to Muhammad as Allah’s prophet or to any other distinctive element of Islam.” Some of these coins even feature crosses, but “it is hard to imagine that such a coin would have been minted at all had the dogmatic Islamic abhorrence of the cross been in place at the time.”

Muhammad’s normative biography raises grave doubts for Spencer, based as it is largely on the hadith, or canonical narratives about Muhammad’s words and actions. Spencer observes that Islamic orthodoxy holds that the hadith passed from Muhammad’s lifetime to the ninth century in an uncorrupted oral tradition before Islamic scholars verified and transcribed hadith. “Seldom, if ever, has such a feat of memory been documented,” Spencer skeptically comments.

While theologically the short Quran’s sparse content is Islam’s primary document, “functionally, if not officially, the Hadith are the primary authority in Islam,” Spencer notes. This particularly results from the doctrine in Quran 33:21 and other verses that Muslims should emulate Muhammad, whose biography the hadith minutely chronicles in “dizzyingly voluminous collections.” Additionally, to a large extent, even the “Muslim holy book—not just its Arabic neologisms and turns of phrase — would be incomprehensible without the Hadith,” Spencer analyzes, which “detail the occasions for the revelation of every passage in the Qur’an.”

The resulting potential for hadith fraud surrounding a holy lawgiver Muhammad is enormous, Spencer observes. Thus, “with Muhammad held up as an exemplar, the Hadith became political weapons in the hands of warring factions within the Islamic world. And as is always the case with weapons in wartime, they began to be manufactured wholesale.” “The consequence of all this was inevitable: utter confusion,” Spencer concludes; the “Hadith is riddled with contradictions.”

Parallel problems plague the Sira or Islamic biography of Muhammad that canonically supplements the hadith in Islamic Sunna or tradition. All accounts of Muhammad ultimately derive from a biography written by Ibn Hisham, who died in 833 almost exactly two centuries after Muhammad, a historian who in turn edited portions of a Muhammad history compiled by Ibn Ishaq, who died in 773. As Spencer notes, “there is simply no alternative to Ibn Ishaq/Ibn Hisham if one wishes to record what the earliest available Islamic sources say about Muhammad.”

This evidentiary record is obviously deficient, Spencer assesses. “Material that circulated orally for as many as 125 years, amid an environment in which forgery of such material was rampant, is extremely unlikely to have maintained any significant degree of historical reliability.” Yet “if Ibn Hisham is not a historically trustworthy source, what is left of the life of Muhammad?” Spencer questions.

Moreover, Muhammad’s orthodox biography is hardly flattering. “The Muhammad of Ibn Ishaq/Ibn Hisham is not a peaceful teacher of the love of God and the brotherhood of man but rather a warlord who fought numerous battles and ordered the assassination of his enemies,” Spencer reviews. Muhammad is “more of a cutthroat than a holy man.”

Muhammad’s biography is not holy writ by any standard, yet his supposed revelation, the Quran, is no better. “For Muslims, the Qur’an is a perfect copy of the perfect, eternal book — the Mother of the Book (umm al-kitab) — that has existed forever with Allah in Paradise,” Spencer observes. “This perfect and miraculous book is, however, decidedly imperfect, as even some Muslims have begun to note publicly,” he caveats.

“The Qur’an is, like the Hadith, riddled with contradictions,” Spencer writes, as the example of alcohol across several Quran verses demonstrates. “Alcohol started out as permitted, and then containing some benefit but also leading the believer into sin, with the sin outweighing the benefit, and finally alcohol is the work of Satan,” he notes. This suggests that the Quran was “written by committee, the product of the combination of numerous divergent traditions.”

Even more critically, the “earliest manuscripts of the Qur’an do not contain most diacritical marks,” Spencer notes. He insightfully explains:

Many Arabic letters are identical to one another in appearance except for their diacritical marks — that is, the dots that appear above or below the character. In fact, twenty-two of the twenty-eight letters in the Arabic alphabet depend entirely on diacritical marks to distinguish them from at least one other letter.

Early Quran manuscripts are not even “consistent in the sets of identical letters they choose to distinguish from one another,” Spencer observes. “The implications of this confusion are enormous,” he correctly concludes. “It is entirely possible that what is taken for one word in that canonical text may originally have been another word altogether.”

Diacritical marks are even more essential for the Qur’an “insists on its Arabic character so often that Islamic theologians have quite understandably understood Arabic to be part of the Qur’an’s very essence,” Spencer notes. In reality, the “Qur’an contains numerous indications of a non-Arabic derivation, or at very least considerable non-Arabic influence.” As the Islamic scholar Christoph Luxenberg, many of the Quran’s notable “oddities become clear when the text is reread in light of the Syriac language and other possible substrata,” Spencer observes. “Many words in this self-proclaimed clear Arabic book are neither clear nor Arabic,” he summarizes.

Reviewing Islam’s canonical farrago, Spencer surmises that the “realm of political theology, then, offers the most plausible explanation for the creation of Islam, Muhammad, and the Qur’an.” “Every empire of the day was anchored in a political theology. The Romans conquered many nations and unified them by means of the worship of the Greco-Roman gods. This Greco-Roman paganism was later supplanted by Christianity,” Spencer notes. Similarly, the “Arab empire controlled, and needed to unify, huge expanses of territory in which different religions predominated.”

Spencer’s analysis easily “explains why Islam developed as such a profoundly political religion.” Likewise, Muhammad “had to be a warrior prophet, for the new empire was aggressively expansionistic.” This clearly found “theological justification” in “Muhammad’s teachings and example.”

Spencer has provided indispensable insight on Islam. As Islamic scholar Volker Popp noted in the book preface, the “material culture of an Islamic past is never judged on its own merits, but only by its usefulness for validating the Islamic myth.” Yet Spencer realized “it was time to get back to real scholarship unhampered by political correctness and the corruption of Saudi money,” stated his colleague Ibn Warraq.

There is a “long scholarly tradition of inquiry into the historical Jesus,” Ibn Warraq noted, but equivalent investigations into Muhammad are far more fraught. “Some of the bold scholars who have investigated the history of early Islam have even received death threats. As a result, some publish under pseudonyms, including scholars of the first rank” like Warraq and Luxenberg, Spencer noted. May more brave individuals follow in his footsteps in uninhibited examination of Islam.