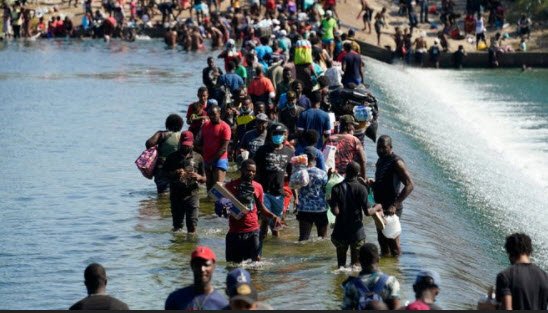 The U.S. is beginning to expel the mostly Haitian illegal aliens massed at the bridge camp at the Texas border.  Let’s not forget it was Joe Biden’s disastrous open borders policies that created this mess.  How disastrous are those policies?  Let’s just look at some of the other border news from recent days.

A 2-year-old girl and a 3-month-old boy – siblings from Honduras – were found abandoned at the Rio Grande.  A 6-year-old boy from El Salvador was found abandoned at a Walmart in Texas.  It’s common for such children to be abandoned with the names of U.S. relatives written on their clothing.

Biden’s policies encourage unaccompanied alien minors to cross the border alone.  The Biden administration deliberately stopped turning them away.  Recently, it was reported the government stops tracking the welfare of such children – who number in the thousands – after they are turned over to sponsors.  There have been stories in the news of such children being forced into labor or otherwise abused.

The seizures of fentanyl by border agents have nearly doubled from last year.  Most of the seizures are at the southern border.  West Virginia sued the Biden administration in August for ending the remain-in-Mexico policy.  The action caused a flood of fentanyl to come across the border, addicting more West Virginia residents, the suit says.

Which brings us to Joe Biden’s disastrous withdrawal from Afghanistan.  The Biden administration flew many Afghan evacuees to the U.S. before they were vetted.  Vetting has begun, but observers say many will evacuees be released before vetting is completed.  They also say those who fail vetting and are thus shown to be security risks will not be sent back but will remain in the U.S.  National security experts warn it’s only a matter of time before loose immigration policies produce another 9/11 jihadi attack on U.S. soil.  Al Qaeda has safe haven in Afghanistan once again and is reconstituting.   The Taliban released thousands of prisoners, many with ties to Al Qaeda and Islamic State, and experts predict some will find their way here.

I predict we won’t hear much about jihadis from Afghanistan coming across the border from the Biden administration.  The administration’s inclination is to shove bad news under the rug.  They tried to hide the bad conditions in alien child shelters, but enterprising journalists smuggled out the story.   Just last week, the administration banned drones from filming the Haitian bridge camp in Texas after video appeared on TV showing just how big the problem was becoming.  I’m going to keep bringing things like this to your attention because Biden’s insane border policies guarantee there is nothing but trouble ahead.