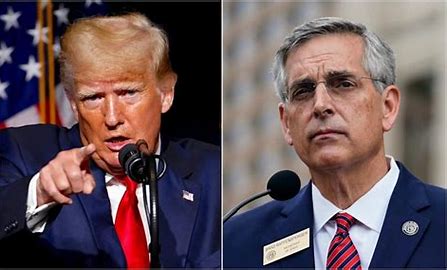 Unbelievable.  Georgia’s Secretary of State responds to the President of the United States again with disdain and dishonor again while lying about the 2020 Election in Georgia.  This man must be possessed.

Last Friday President Trump sent a letter to the corrupt Georgia Secretary of State Brad Raffensperger this time listing 43,000 ballots from the 2020 Election in Georgia that were counted in the certified results but were invalid.  These ballots lacked the legally required chain of custody documentation required by law.  They never should have been certified and they should now be decertified.  President Trump asked Raffensperger to do just that.

But the corrupt and grotesque SoS responded by ignoring the complaint and claiming President Trump knows he lost.  Of course, Raffensperger stole the election from President Trump by hundreds of thousands of votes and gave the win to Joe Biden by 12,000 votes.  (There were over 350,000 ballots cast in Georgia missing legally required chain of custody documentation at our last count.)

Raffensperger responded today with the following on CNN, after claiming he’s a lifelong Republican and full of integrity.  The dirty Raffensperger did nothing when thousands of ballots were pulled out from below tables on election night and jammed through tabulators and to this day does nothing about the hundreds of thousands of ballots that were likely manufactured with no legally required chain of custody documentation but counted in his certified results.  Raffensperger says:

As soon as we were notified by that we began an investigation several weeks ago and coming out of it the first thing you notice is that the DeKalb County election official took an extended leave of absense.  But we have an ongoing investigation of that.  But to your point the ballots themselves were approved and are lawful ballots but where processes were violated that’s where we’re investigating right now and it will come before the state election board.

Raffensperger went on to lie and lie again, claiming President Trump was only doing this to fundraise on it.

Now to think Raffensperger’s actions have led to an open border of millions of illegals coming into the US, 13 dead service members in Afghanistan, billions to terrorists and a soon to be decimated dollar and economy. No Mr. Raffensperger, we both know who you are.