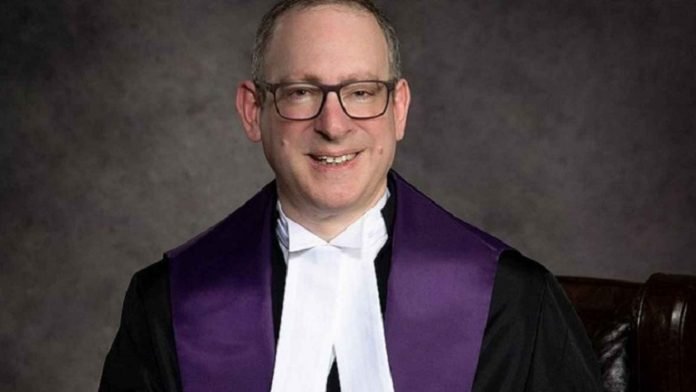 Penalized for “blocking” the hiring of an “essentially anti-Semitic” professor at University of Toronto.

Legal experts are puzzled by why the Tax Court of Canada prevented a Jewish judge from presiding for several months in cases involving members of the Islamic faith rather than removing him entirely from the bench until allegations against him were resolved.

It is more puzzling that Judge David Spiro would be subjected to the humiliating and severe measure of being barred from presiding over cases involving Muslims, suggesting that there is far more involved in this story than meets the eye. The suggestion of temporarily removing him from the bench altogether until resolution of the “allegations” is even more jarring.

According to Newswire, the “allegations of misconduct against Spiro” reportedly involve his efforts to oppose the hiring of a highly questionable academic on the faculty of law at the University of Toronto:

It was alleged that Spiro used his influence as an alumnus and major donor to try to block the university’s faculty of law from offering a job to Valentina Azarova, an international law practitioner who has written widely on Israel-Palestinian affairs.

Azarova’s record shows that she takes “a severely critical view of Israel’s actions vis-à-vis the Palestinians.” It is telling that she is supported by the organization Canadians for Justice and Peace in the Middle East (CJMPE), an aggressive promoter of the BDS Movement. The Canadian Jewish advocacy group, B’nai Brith, referenced Azarova as “essentially antisemitic.” B’nai Brith petitioned Canadian government ministers to deny a work permit for the German professor “if she is accepted to the position of director of the International Human Rights Program (IHRP) at the University of Toronto. Azarova is blatantly biased against Israel, B’nai Brith argued.”

It is thus easy to see why Judge Spiro would have concerns about Azarova. But to accuse him of indiscretion, misconduct and abuse of his influence is absurd. All potential hires anywhere are discussed by any number of individuals who influence the hiring process. It is unreasonable to expect Spiro to be voiceless.

It has become ubiquitous globally to attempt to silence those who offend Islam, offend Muslims, or get in the way of certain agendas.

Circulating criticisms of Judge Spiro’s influence in the hiring process of Azarova also conveniently omit the fact that there were other highly qualified Canadians vying for the same job.

What comes next is atrocious:

Chief justice of the Tax Court, Eugene Rossiter, informed the Canadian Judicial Council, a regulatory body for judges, of measures taken in response to a number of allegations of misconduct against Spiro in connection with a proposed hiring at the University of Toronto.

Remarkably, Judge Spiro’s legitimate concern about Azarova — that she would likely fan the flames of campus antisemitism — was translated into accusations of his being “biased” (a demeaning label for a judge) and exhibiting “misconduct” (discrediting to any judge).

Notice that the word “biased” isn’t used to describe Azarova.

Consequences were swift for Judge Spiro:

Rossiter wrote that “all files assigned to Justice Spiro would be reviewed by the associate chief justice of the Tax Court” and that Spiro would “recuse himself immediately from any file at any time in which it appeared to him that either the counsel, representative of any litigant or a litigant is a Muslim or is of the Islamic faith.” Rossiter said that the decision was made to “allow for any concerns related to the potential perceived bias from Justice Spiro to be removed.”

Perceived? By whom? It starts with Queen’s Law Professor Leslie Green. According to Law Times News:

Green made the complaint after reading media reports that Spiro had allegedly pressured Dean of Law Edward Iacobucci to reverse a job offer made to an academic because of her scholarship related to Israel’s human rights abuses against Palestinians.

It is apparent where Green stands on the Israel-Palestinian issue.

It is curious that it is not only Judge Spiro who has sparked allegations of bias against Muslims at a federal institution over the Palestinian issue. So has the Canada Revenue Agency (CRA), which has been accused of “prejudice” against Muslim Charities, which was found to be funneling money to Hamas.

Keep in mind that once a Muslim charity is flagged by the CRA, and its charitable status is revoked or the group is penalized in some fashion by CRA, entering an appeals process is an option. The first layer of external appeal, which can well result in overriding the CRA, is via the Tax Court of Canada (TCC) — the same court where Judge Spiro presides. The TCC hears appeal cases when all avenues have been exhausted.

The process of appeal first calls for a “Notice of Objection” to be sent to the Canada Revenue Agency (CRA). A review of this Notice results in a “reassessment, a confirmation or a determination.” Then, if the dispute remains unsettled, it goes to the TCC.

Near the end of last month, a Muslim charity called Human Concern International (HCI) went to the TCC to fight the findings of the Canada Revenue Agency (CRA), which prohibited it from issuing tax receipts after “an audit by the agency’s charities directorate that flagged concerns about six initiatives.” Specifics were unreported.

The full process of appeal against the CRA’s rulings was pursued by HCI: 1. objecting through the revenue agency’s internal administrative appeal process. 2. going to the federal Tax Court to delay suspensions by the CRA, which resulted in the federal Tax Court judge ruling against providing a stay of the suspension, and 3. going to the Federal Court of Appeals, where HCI’s case is now being reviewed.

The Tax Court has the power to override CRA penalties after reviewing a case — again, the same court that Judge David Spiro presides in, except now, Spiro has been stripped of presiding over any case involving anyone from the Islamic faith.

It is common knowledge that many Muslim charities in America have been discovered to be linked to terrorism. View a list HERE.  Many of those have offshoots in Canada.

Aside from Spiro raising the ire of some academics, the media and some of his own colleagues over his concerns about Valentina Azarova, one must remember that separately, fierce efforts have been underway in Canada to stop the audits of Muslim charities, calling such audits “prejudiced.”

Back in June, the news broke that “more than 130 groups call on Canada to stop ‘prejudiced audits’ of Muslim charities.” The vast majority of them are Muslim groups. Among the others are recognized anti-Israel Boycott, Divestment and Sanctions (BDS) advocates, such as Canadians For Justice and Peace in the Middle East and the Canadian Union of Postal Workers. See the list HERE.

Canada Revenue Agency (CRA) Spokesperson Pamela Tourigny has defended the fairness of the CRA process, stating to the Non Profit Times that “the CRA does not select registered charities for audit based on any particular faith or denomination.”

The article goes on to explain how selections for audits are made. Tourigny further states:

When audits find non-compliance, the charity is first given an opportunity to correct the non-compliance issues before sanctions or revocations are issued.

A warning about the implications of what may be coming next: In July, an “emergency national summit on Islamophobia” took place. Before that Summit, the National Council of Canadian Muslims (formerly CAIR-CAN) released 61 recommendations for every level of government to fight “Islamophobia.”

Then at the Summit, Prime Minister Trudeau accused Revenue Canada of taking aim at Muslims. He stated:

From the (Canada Revenue Agency) to security agencies, institutions should support people, not target them.

At that same Summit, Revenue Minister Diane Lebouthillier agreed “to ask the taxpayers’ ombudsperson, François Boileau, for a systemic review of the concerns,” ostensibly about Muslim charities being discriminated against and picked on.

There is a great deal of disturbing evidence that proves how damaging these baseless accusations against Canada’s institutions are. United Press International reported findings about the Muslim Association of Canada and IRFAN-Canada in 2015:

The Muslim Association of Canada (MAC), one of the largest Muslim organizations in the country, is being accused of funneling money to designated terrorist organization IRFAN-Canada. A Canadian police raid found that MAC gave $296,514 to IRFAN-Canada between 2001 and 2010, according to The Toronto Sun.

The Toronto Sun headline is no longer online, but here’s a screenshot…

The Muslim Association of Canada is a self-described Muslim Brotherhood-tied group. See screenshot and more HERE.

A year earlier, Revenue Canada concluded this about IRFAN:

IRFAN-Canada is a not for profit organization operating in Canada. Between 2005 and 2009, IRFAN-Canada transferred approximately $14.6 million worth of resources to various organizations associated with HAMAS, a listed terrorist entity under the Criminal Code.

The terrorist designation was made under the Conservative Stephen Harper government.

IRFAN engaged in the full appeals process against Revenue Canada, as outlined earlier. The appeal was still in progress when it was last reviewed in 2018. IRFAN has also applied to federal court to have its terrorist designation removed, and it will likely succeed under the Trudeau government. In the meantime, IRFAN is actually getting taxpayer funds — along with the National Council of Canadian Muslims — to help the Trudeau government impose its “anti-Islamophobia” M-103 measures on Canadians, which include “monitoring citizens for compliance” and training law enforcement to recognize online and offline “hate.”

In conclusion, there is no clear evidence in any public reports of bias by Judge Spiro with regards to Valentina Azarova, let alone “misconduct.”  Prudence, yes. Bias, no.

Canadian universities do not need to hire pro-Palestinian propagandists from abroad to teach students all about a fictional Israeli “occupation,” while leaving out the Palestinian jihadist narrative; nor do they need to aid in the facilitation of campus hatred against Jewish students that erupts particularly aggressively whenever Israel levies retaliatory strikes to protect its citizens against rocket fire from Gaza. The University of Toronto (U of T) already has enough of a “festering antisemitism” problem.

Likewise, the CRA is not biased or prejudiced in exercising its due diligence regarding Muslim charities, but has been prudent, despite escalating pressures that amount to exonerating Muslims regardless of the evidence. There is an established problem with Muslim charities funneling money to aid and abet jihadist activities in the Palestinian territories.

Pro-Palestinian and BDS supporters will continue to scream “bias,” “discrimination,” and “Islamophobia” at every turn in order to facilitate their ambitions; while “progressives” in the media, in positions of political leadership, and now, evidently, at the Canadian Tax Court, continue to aid and shield them. The claim that “legal experts are puzzled by why the Tax Court of Canada prevented a Jewish judge from presiding for several months in cases involving members of the Islamic faith rather than removing him entirely” is wrongheaded and exaggerated. It all depends on which legal experts one consults. Let’s hope that Judge Spiro — now a target of antisemitism and embroiled in a political brouhaha — will be fully restored to his duties. The courts need him more than ever, and owe Canadians some restored confidence in a system hijacked by special interest groups. Canadian institutions need to be restored to being fully equitable systems, not strong-armed into favoring Muslims above everyone else.

In the meantime, the blatant antisemitism displayed toward Judge Spiro needs to be publicly addressed.