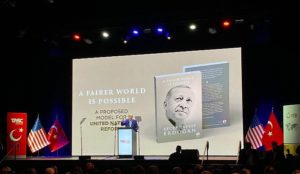 The “Islamophobia” subterfuge has no place in America, but it is being spread on American soil by Turkish President Recep Tayyip Erdogan. Now this despot is in New York City selling his wares. Never mind the abuses by Islamic supremacists globally.

Erdogan’s global push of the “Islamophobia” trick is an escalation of a long-standing, patient stratagem by Islamic supremacists to subjugate America, the global symbol of freedom, and more broadly the West, under the Sharia prohibition of blasphemy. In this vision, infidels must not insult Muhammad or Islam, as per Sharia restrictions. And they must treat Muslims with superior respect — they must not be subjected to the same criticism or scrutiny as anyone else; nor can Islam be mocked in the same manner that Christianity is mocked.

A billboard in New York City’s Times Square that reads “STOP ERDOGAN,” referring to Turkish President Recep Tayyip Erdoğan, whose rule has seen the imprisonment of tens of thousands on politically motivated charges, has drawn the ire of officials from the ruling Justice and Development Party.

The late writer Christopher Hitchens accurately stated, in his article “The Case for Mocking Religion“:

By this definition, we no longer live in a civil society. The Western response to Islamic supremacist demands has been to bow down in order to avoid insulting Muslims. The cornerstone upon which all freedoms are established in free societies is the freedom of speech and expression. Instead, Westerners have accepted the “Islamophobia” canard, imposing reprehensible restrictions upon citizens and blurring the meaning of genuine bigotry and discrimination. Imposing “Islamophobia” upon the West is an Organization of Islamic Cooperation (OIC) stratagem.

Western leaders have surrendered the freedoms only found in Judeo-Christian democracies, and thus betrayed their responsibility to protect their countries and treat all equally.

There is a reason why the term “anti-Muslim bigotry” does not suffice for mainstream Muslim lobbies, which insist on the use of the term “Islamophobia.” It is because the former term does not place Muslims in a position of supremacy, beyond criticism and scrutiny. So they intimidate and bully Western leaders into cowering to their demands. Pakistan’s Prime Minister Imran Khan has likened the “pain” Muslims feel over insults to Muhammad to the pain suffered by Jews during Holocaust. To any normal thinking person, this mindset is warped. Imran Khan has also been working steadfastly with the OIC to impose the “Islamophobia” subterfuge upon the world.

Turkey is taking a leading role in the fight against Islamophobia on international platforms, President Recep Tayyip Erdoğan said on Sept. 19, resembling Islamophobia to a “provocative, deadlier” virus.

“As humanity, we are fighting against the COVID-19 virus, as well as another virus that is more provocative, deadlier and more insidious. The name of this virus is the ‘Islamophobia’ virus,” Erdoğan said in his speech at a conference titled “A Fairer World Is Possible,” organized by the Turkish-American National Steering Committee (TASC) in New York.

This virus is spreading very quickly in countries that have been “portrayed as cradles of democracy and freedom for years,” Erdoğan said, adding that Islamophobia has turned into a trend that disrupts Muslims’ daily lives and threatens social peace.

Expressing that they see this ideological fanaticism, which is no different from ISIL in terms of mentality, taking root in different layers of society, Erdoğan said that Turkey has been working with the Organization of Islamic Cooperation (OIC) and the U.N., among others, as part of the efforts against Islamophobia.

“We are backing every kind of effort to eliminate all threats to our religion and our Muslim brothers,” the president said while calling for support from American Muslims in Turkey’s fight.

Erdoğan also elaborated on the issue of terror groups – the PKK, YPG and FETÖ – and called on members of the Turkish American community to continue to inform their American counterparts about the true face of these terror organizations.

“No matter how big it is, no lie can stand against the sun of truth,” Erdoğan said while stressing over the need for unity against such groups.

The president arrived in New York to attend the U.N. General Assembly’s 76th session, where world leaders will give their annual speeches.

Before his address, the president briefly visited the soon-to-open Turkevi Center located at 821 First Avenue in Manhattan across from the U.N. headquarters.

He said that the 36-story skyscraper is a “monument of pride” that would function not only as a home for Turks but also for the Muslim American community…..