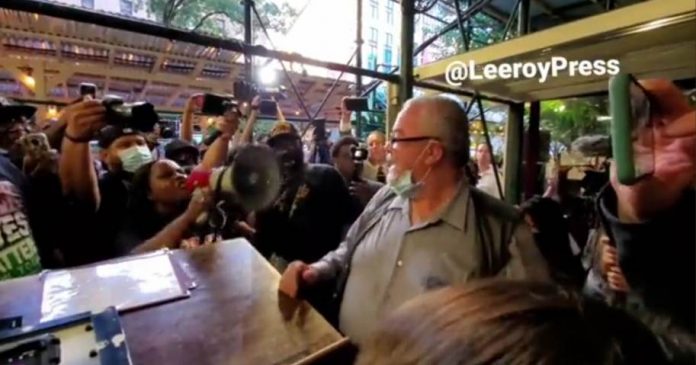 The rushed vaccines have caused a massive divide within the United States, primarily along political lines, but recent revelations are proving that it goes even deeper than right or left.

Two key groups that Democrats rely on to win elections – Black (43%) and Hispanic Americans (48%) – are the least likely of any racial demographic to be vaccinated, and that’s not likely to change anytime soon.

Now that someone as influential as Nicki Minaj has spoken out, and the draconian vaccine mandates in cities like NYC have disproportionately affected minorities, more people are choosing to think for themselves – that’s a yuuuuuuuge problem for the leftist establishment.

Even the most radical BLM thugs have begun clapping back over the tyrannical dictates of their progressive leaders.

Last week, a wild brawl broke out at a well-known Italian restaurant in the Upper West Side of New York City after three black women were asked to provide proof of vaccination to be able to eat. Video of the incident at Carmine’s went viral – it was the first assault on record that was carried out as a direct result of New York’s vaccine pass.

The incident sparked massive backlash and led to a large group of BLM activists gathering at the restaurant on Monday. The furious crowd blocked the street in front of the building, and used a bullhorn to chant, “Cancel Carmine’s.”

According to the protesters, the vax pass is just an “excuse” that allows white supremacists to be racists.

Leeroy Johnson, an independent journalist, was on the scene and captured the “chaos” on video:

#BreakingNews
Chaos Erupts at carmines restaurants in NYC at the protest put on my #BlackLivesMatter#NYC #VaccinePassports pic.twitter.com/QxsxE4vzIs

Johnson interviewed the protest’s organizer Hawk Newsome – The founder of the BLM chapter of Greater NY – who explained how he deeply believes that the vaccine is “a choice,” saying that ‘nobody should be excluded from everyday activities’ just because they decide not to take the experimental jab.

He also opined that black Americans have “every reason to doubt” the sCiEnCe, because it has changed repeatedly since Trump left office.

“The vaccines have had effects that people come out and say ‘oh that never happened,’ but they do happen.

We as black people have every reason not to trust the vaccines. I’m not telling you not to get it, im just saying you should have a choice.”

An interview I did with @IamHawkNewsome the founder of BLM greater NY at Carmines restaurants in NYC. #NYC #blm #COVID19 pic.twitter.com/mbfPnckcJm

A very reasonable and American position – one that might get you banned from social media.. so be careful – too bad this radical can’t apply the same faculties of reason to any other aspect of his Marxist ideology.

The group of protesters stayed outside the restaurant for hours during their dinner rush. They used a megaphone and screamed “Carmine’s are racist” and “Carmine’s are Fascist” at workers and diners, with many obscenities peppered in for degenerate effect.

#HappeningNow
Black lives matter activists show up in front of Carmines restaurants in NYC after an issue happened there that stemmed from a vax card .
They chant " Carmines is racist " #VaccinePassports #NYC #COVID19 pic.twitter.com/Ke0PQUj1u4

The BLM mob was also up to their typical thuggish ways, intimidating people who were passing through the area and blocking off the street. One man who refused to back down when he was confronted was told he had to leave the area as others chanted “whose streets, our streets.”

At the protest at Carmines restaurants in NYC organized by Black lives matter after an incident Is occurred at the restaurant. Blm and a guardian angel ( Curtis sliwa org ) gets in to an heated yelling match on a NYC street. #NYC #BLM #Mondayvibes pic.twitter.com/i7mx8E1uqi

In one video a protester angrily grabs the megaphone out of the organizer’s hands and uses it to scream in the face of a man for saying he was a ‘white American.’

The crowd mindlessly begins to chant the word ‘shame’ in approval of her outburst.

These people are unhinged.

#breakingnews Incident occurred between @newyorkvonni and a man who pushed her at carmines restaurants in NYC #BLM activists put a protest outside the restaurants after they explain a radial slur was made to a lady at the restaurant and they stated they had the v card as an ex pic.twitter.com/r5GMHEyfpH

Since Biden has taken over, the radicals in the leftist establishment have lambasted conservatives for being anti-vaxxers who are responsible for the continuation of the ‘pandemic’ – but have repeatedly downplayed and ignored a growing group of dissenters within their own ranks.

Now, their neglect may be hitting a breaking point.

Hopefully, this awakening will be on more than just the vaccines.