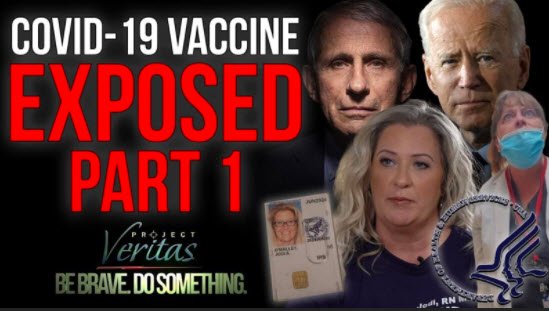 I have put out two previous commentaries based on official government data pointing out that more than 14,000 people have died from adverse reactions to COVID vaccines.  I have been accused of spreading misinformation, but there has been no substantive response to my arguments from health policy analysts on a listserv in Washington or elsewhere.  One of my accusers called my second commentary “misleading and irresponsible” but he did not even attempt to address my arguments.  His boss told me to ‘F*** Off’ and that I was blacklisted, meaning they will not accept any more emails from me.  Why all the hysteria over official government numbers?  Why all the silence about adverse reactions?  Why won’t anybody address my arguments?

Unfortunately for my critics, James O’Keefe and Project Veritas just put out a video in which a registered nurse at a federally-run hospital blows the whistle on all the adverse reactions she’s seeing to the COVID vaccines, including the death of a colleague.  She calls the entire effort by government agencies to cover up the adverse reactions “evil at the highest level.”  (at 2:50)  The whistleblower spoke up after watching one of her co-workers die after taking the vaccine.  The co-worker didn’t want the vaccine, but felt coerced into taking it, and now she’s dead.

The whistleblower is seeing “a lot” of vaccinated people get sick with side effects but “no one is writing the VAERS report because it takes a half an hour to write the damn thing.”  This indicates that the government numbers I’ve been using are actually understated, making the case worse for my critics who claim the numbers are overstated.  Doctors are required by law to report adverse reactions to vaccines, as I’ve documented, and is further documented in the video, but they’re not doing it.

A doctor secretly recorded in the video said the federal government is not publishing information about adverse reactions, because those studies are not being done.  This is exactly what I suspected and wrote about in my second commentary.  The federal government will not do adverse reaction studies unless someone forces their hand because they know the results would contradict their phony COVID and vaccine narratives they’ve been feeding us.

The whistleblower makes an interesting point along these lines.  The CDC and FDA are supposed to be protecting us, but if they won’t do the adverse reaction studies, how can they say the vaccines are safe and approve them for general use when the clinical trials are over?  I’m getting more than a whiff of corruption here.

So I say to my critics, including the ones who told me to ‘F*** Off’:  OK, if the vaccines aren’t killing people, let’s remove the liability shield the manufacturers enjoy under federal law and see what they do.  I would bet they stop manufacturing the vaccines immediately because they know they would get sued for all the deaths, heart problems, blood clots, miscarriages, and other adverse reactions caused by the vaccines as shown by official government numbers.