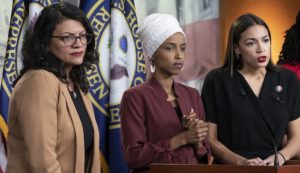 The Squad members are busy doing their bit for Hamas in the U.S. Congress, working to make sure Israeli civilians are exposed as much as possible to jihad rocket attacks.

The removal of the language from a continuing resolution that would keep the federal lights on through early December prompted an urgent call from Israeli Foreign Minister Yair Lapid to House Majority Leader Steny Hoyer (D-Md.).

Lapid tweeted that Hoyer had reassured him that the cut was a “technical postponement” and that the aid “will be transferred soon.”

“I thanked Majority Leader Hoyer for his commitment and emphasized to him the need to approve the request as soon as possible to ensure Israel’s security needs,” tweeted Lapid, who added that his government was “rebuilding a relationship of trust with the Congress” after it had been “neglected” by former Prime Minister Benjamin Netanyahu.

On Tuesday evening, Hoyer announced that he would bring a standalone bill on funding the Iron Dome program to the House floor before the end of this week, telling his colleagues: “I was for that. I’m still for it, we ought to do it.”

Rep. Rosa DeLauro (D-Conn.), the chair of the House Appropriations Committee, had told reporters earlier Tuesday that the Iron Dome funding would be added to the annual defense spending bill, but later opted to support it as a standalone measure.

“The United States must fully live up to our commitments to our friend and our ally, Israel,” DeLauro said.

“Squad” members had threatened to withhold their support for the bill if the provision wasn’t axed. With Democrats holding an eight-seat majority in the House, they can only afford to have three members of their conference vote against a measure before it is defeated.

Moderate House Democrats slammed their progressive colleagues for their anti-Israel stance, arguing that the Iron Dome is not an offensive weapon but rather a defense mechanism meant to shield civilians from rocket attacks by Islamist militant groups.

Rep. Elissa Slotkin (D-Mich.), a member of the House Armed Services Committee who has worked at the Pentagon and the CIA, tweeted that removing the funding language from the legislation was “devoid of substance and irresponsible.”

“Iron Dome is a purely *defensive* system — it protects civilians when hundreds of rockets are shot at population centers,” she wrote. “Whatever your views on the Israeli-Pal[estinian] conflict, using a system that just saved hundreds, if not thousands, of lives as a political chit is problematic.”

Slotkin added that the $1 billion at issue “isn’t new funding, or unusual funding, or a precipitous increase in funding.

“All of this is publicly-available information,” she concluded. “So to target Iron Dome now means the issue isn’t a genuine concern over the system, but rather the desire to attack something – anything – related to the State of Israel; it’s devoid of substance and irresponsible.”

“The Iron Dome protects innocent civilians in Israel from terrorist attacks and some of my colleagues have now blocked funding it,” Gottheimer tweeted. “We must stand by our historic ally — the only democracy in the Middle East.”…