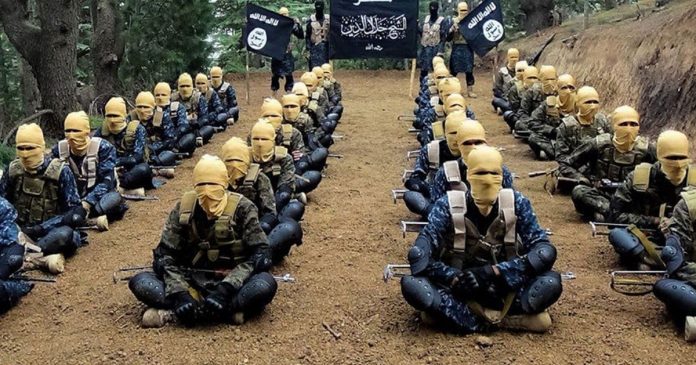 The West—and especially the U.S.—needs to focus immediately and intently on that threat because they will come for us again.

As the United States (U.S.) fled the Afghan battlefield in late August 2021, a scene of utter chaos developed at the Hamid Karzai International Airport in Kabul, where thousands were trying to get on a flight out of the country. The U.S. military had already snuck out of Bagram Air Force Base in the middle of the night, 5 July 2021, without even telling the new Afghan commander – and leaving behind over $80 billion worth of advanced U.S. military equipment. That left Kabul Airport as the only way out of the country, especially after Kabul itself fell to the Taliban on 15 August 2021.

Most American military having already departed Afghanistan, on 26 August, only a small contingent was present at the airport to check evacuees’ passports and visas. Multiple security warnings about possible jihad terror attacks had come in over previous days and even hours, but nevertheless, a suicide bomber managed to infiltrate among the crowd pressing at the Abbey Gate. At least 182 people were killed, including 13 U.S. service members and at least 169 Afghan civilians. The Islamic State-Khorasan Province (IS-KP) claimed responsibility for the attack.

The attack focused renewed attention on IS-KP, which had carried out dozens of previous terror attacks in Afghanistan but not received the volume of media attention that its parent organization, the Islamic State, had gotten in the Middle East. The last major news coverage of IS-KP came in April 2017, when President Donald Trump ordered a “MOAB” (Mother of All Bombs) attack against an IS-KP tunnel complex in  Nangarhar Province close to the Afghanistan/Pakistan border.

So, what is the Islamic State-Khorasan Province, how did it get to Afghanistan, and what is it doing there?

IS-KP refers to the Islamic State’s main foothold in Central Asia, located in Nangarhar Province, a southeastern area of Afghanistan, close to the Pakistani border. It was established there in January 2015 as the original Islamic State in Iraq, and al-Sham (ISIS) changed its name to simply “Islamic State” to reflect the global spread of its presence. Core IS sent a number of fighters and also some funding to help IS-KP get started. Among its members are some disaffected Taliban (with which it maintains a turbulent relationship), Pakistanis, and others from various countries around the world, including Bangladesh, India, and Myanmar. IS-KP maintains close ties to the Haqqani network in Afghanistan, which itself has been closely affiliated with the Taliban since pre-9/11. Afghanistan has long been a top destination for jihadis from many countries and likely will be even more so now that the Taliban has taken over.

In terms of Islamic ideology, there’s really no daylight among Al-Qa’eda, IS-KP, and the Taliban. They are all extremely devout, faithful, practicing Muslims whose stated goal is to establish the wilayat (province) of Khorasan as a part of a global Islamic State, in obedience to Islamic doctrine, law, and scripture. The name “Khorasan” comes from the name of the easternmost province of the ancient Persian Sassanid Empire. The word in Farsi means the “place where the sun rises.” The geographic extent of the Persian Khorasan Province stretched from the eastern part of modern-day Iran, across today’s border with Afghanistan, and far into areas occupied today by Tajikistan, Uzbekistan, and even China. By naming this group after that ancient Persian province, IS-KP indicates its own ambitions eventually to control a similar geographic expanse under the rule of Islamic Law.

Much has been made of supposed hostility between the Taliban and IS-K, but although there are regular squabbles, often involving leadership disagreements, turf wars, and funding streams from illicit activities like narcotics trafficking, family, tribal, and ideological ties make them far more likely to collaborate than not. Like Islamic jihad groups the world over, AQ, the Haqqani network, IS-K, and the Taliban all share a rock-solid core fidelity to Islamic doctrine, law, and scripture. More worldly connections include cooperation among all these groups in the opium trade, whose international transit routes crisscross Nangarhar, where IS-KP is headquartered. The Haqqani network, a family clan enterprise that remains close to Al-Qa’eda and the Taliban, is headed by Sirajuddin Haqqani. He is the Taliban’s second-in-command, a Specially Designated Global Terrorist by the U.S. Treasury Department, and currently serves in the Taliban government as the Afghan Minister of the Interior. IS-K cooperates not only with the Haqqanis but also with Pakistani jihad groups, including Jaish-e-Mohammed (JeM) and Lashkar-e-Taiba (LeT), which operate from Pakistani territory. To complicate these connections even further, we’ll recall that the Afghan Taliban itself was founded and remains armed, funded, and supported by Pakistani intelligence, the ISI (Inter-Services Intelligence) agency. The Haqqani network likewise is closely supported by ISI.

All of this is not to confuse, but rather to demonstrate that the shifting names of these jihad groups, their leadership, alliances, and even geographical presence are far less important than understanding that throughout nearly 1400 years of Islamic history, it has ever been the same. The details described here about the Islamic State-Khorasan inform us about a current and developing threat inside an Afghanistan rapidly returning to its pre-9/11 terror haven status. The West—and especially the U.S.—needs to focus immediately and intently on that threat because they will come for us again.