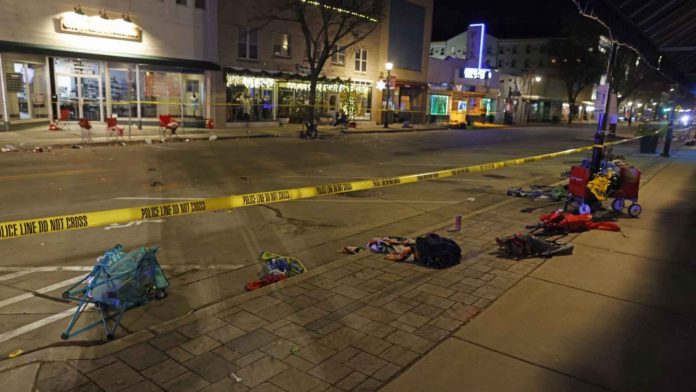 It’s time to tell the truth about the black racism, crime and terror that came to Waukesha.

Baby strollers and battered wheelchairs lay on the street in the aftermath of this racist rampage, while the media tries to cover up his black racist agendas. If a white racist had slammed his car into a black parade, there would be little doubt and less question about his motives.

But black racists always get a pass by a media that’s happy to enable their racism. While white racism is denounced as disgraceful, black racism is embraced as revolutionary.

Milwaukee BLM leader Vaun Mayes, who has appeared alongside local Democrat politicians, responded to the horrifying atrocity by suggesting, “It sounds possible that the revolution has started in Wisconsin. It started with this Christmas parade.”

How better to start the Marxist revolution than by running down some Dancing Grannies? This is sick. But it is enabled by the collusion of well-meaning people who don’t want to acknowledge that blacks can be mass murderers and racist monsters just like everyone else.

Black Lives Matter had adopted a quote from black nationalist fugitive cop killer Assata Shakur as its slogan, “It is our duty to fight for our freedom”. That chant has appeared at Democrat Party events and even corporate anti-racism sessions.

The phrase just before the chant is, “We must gain our liberation by any means necessary”. People who say things like this are criminals and race haters ready to commit the worst kinds of  atrocities. And those who enable them should be held accountable.

Shakur’s slogan was dedicated to black nationalist terrorists, including Mark Essex, a racist killer who opened fire on New Year’s Eve in New Orleans killing, among others, a honeymooning couple. Betty Steagall was shot in the back of her head while embracing her murdered husband. Essex left a Black Liberation flag lying near the corpses of the doctor and his wife.

That’s what “by any means necessary” means. It’s the murderous black racism the Left enables.

When Vaun Mayes was arrested on a burglary charge, leftist Milwaukee County DA John Chisholm refused to pursue charges. It was also Chisholm who freed Brooks on $500 bail even after the monster had been accused of running over the mother of his child.

“Is there going to be an individual I divert, or I put into treatment programs, who’s going to go out and kill somebody?” Chisholm had previously admitted. “You bet. Guaranteed. It’s guaranteed to happen. It does not invalidate the overall approach.”

The combination of black racism and leftist support for black criminals led to the parade horror.

“If the solutions were easy, we would have solved the challenge long ago, but they are not,” Chicago’s Mayor Lori Lighfoot argued in response to complaints that she wasn’t letting the police fight crime. “The root causes of community violence are deep, complex, and generations in the making.” This is code for blaming black criminality on systemic racism and on white people, the creed of racial hate that fuels our current crisis while rejecting black responsibility.

The actual root cause, a corrupt welfare state that treats crime like a civil rights movement, is easily visible in Chicago, Milwaukee, and countless Democrat cities. Black Lives Matter perfectly blends crime, racism and revolution until it’s impossible to tell the difference.

Communist revolutions begin as crimes with robberies, murders, and bombings. And that makes leftists into criminals and criminals into leftists. The Bolsheviks called the bank robberies they used to finance their revolution, “expropriations”. BLM looters are just following in their footsteps by “expropriating” the shelves of neighborhood grocery stores for their racist revolution.

Are gangs of looters clearing out stores to protest the Rittenhouse verdict or to make money?

When crime is a civil rights cause and criminals are martyrs, crime is a revolutionary act. Every major BLM martyr in recent years has been a thug with a long criminal record. Brooks, like countless other career criminals, benefited from leftist calls to shut down the justice system.

Every criminal is the victim of systemic racism. The only way to justify crime is to demonize crime victims as white racists. As the book In Defense of Looting argued, private property is “innately, structurally white supremacist” and looting it is an act of racial liberation.

Black Lives Matter racializes crime and turns every criminal act into a hate crime against white people. That’s how you end up with Black Lives Matter taking ownership of a racist thug ramming his car through a Christmas parade, leaving children and grandmothers bleeding on the ground in his wake, into a revolutionary act of political terrorism against whiteness.

The system that coddles black criminals like Brooks, enabling them to kill, is the true form of systemic racism. No justice system in this country punishes people because of their race, but some Democrat cities indisputably give criminals a pass because they have racialized crime.

What motivated Darrell Brooks’s rampage of death? The career criminal had absorbed the black nationalist ethos of BLM that criminals were victims and police were the real criminals. A thousand media outlets, politicians, and activists had warned that violence would follow if Rittenhouse were set free. The looters who struck luxury boutiques and the black supremacist racist who drove through a Christmas parade just followed up on the media’s incitement.

Sometimes BLM’s career criminals fight systemic racism and the white supremacist idea of private property by looting malls, other times by running over kids at a Christmas parade.

If white people are evil, then any and every attack on them becomes innately justifiable.

And no amount of black racism can ever be considered too much.

Look no further than black nationalist poet Amiri Baraka whose deranged hateful verses include such stirring lines as, “We are all beautiful (except white people, they are full of, and made of s__t),” The former poet laureate of New Jersey raved. “Come up, black dada / nihilismus. Rape the white girls. Rape / their fathers. Cut the mothers’ throats.”

Baraka’s poetry has been recited at the Museum of Modern Art, he was eulogized by The Nation and praised by The New Yorker. Kirsten Clarke, Biden’s racist pick for assistant attorney general, even circulated one of his essays.

“The specter of the angry black man has been evoked in politics and popular culture to convince white folks that a big, bad black man is coming to get them and their daughters,” the CNN op-ed complained.

But it’s the leftist radicals, white and black, who celebrate black criminality, transforming even the worst crimes into a leftist revolution by degrading both black perpetrators and white victims. As Black Panther leader Eldridge Cleaver wrote, “rape was an insurrectionary act. It delighted me that I was defying and trampling upon the white man’s law, upon his system of values.”

As Cleaver had practiced “on black girls in the ghetto”, Brooks had practiced on his former girlfriend, running her over, before running over women and children at the parade.

Like bombing, murder, and rape, it’s only the latest revolutionary episode in black racism.

America is consumed with discovering white microaggressions while even the most grotesque forms of black racism from the Black Hebrew Israelites to Black Lives Matter, hate groups the killer supported, are celebrated as a reckoning with a false history of American racism.

When the issue of black racism is raised, leftist apologists typically argue that black racists have “no power”, that they are “punching up”, and that the whole thing is a non-issue.

The dead and dying in the streets of Waukesha might disagree.