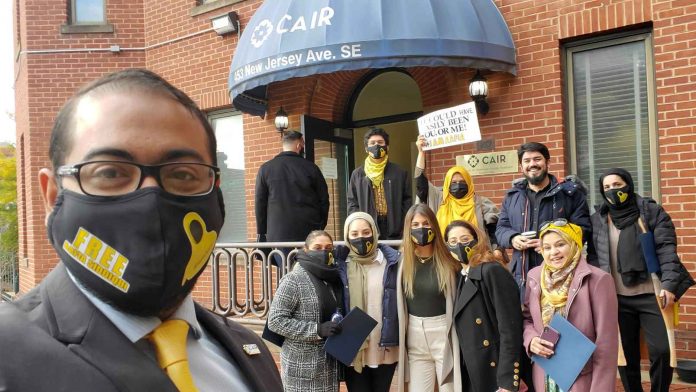 The Council on American Islamic Relations (CAIR), American Muslims for Palestine (AMP), the Islamic Circle of North America (ICNA), and the Muslim American Society (MAS) all have their foundings linked inseparably with militant Islamic ideologies. For CAIR and AMP it was Hamas, ICNA, Jamaat-e-Islami, and MAS, the Muslim Brotherhood. This month, not unlike numerous occasions in the past, the four have come out in support of terror. This time, it is to call for the freedom of female al-Qaeda operative Aafia Siddiqui, who was convicted for attempted murder of US officers in Afghanistan. The agenda of these four groups could not be any clearer.

CAIR was established, in June 1994, as a part of the Muslim Brotherhood’s US Palestine Committee, under the leadership of then-global head of Hamas, Mousa Abu Marzook. In 2007 and 2008, CAIR was named by the US government a co-conspirator for two federal trials prosecuting the Holy Land Foundation (HLF) and its associates for raising millions of dollars for Hamas. One of the defendants, Ghassan Elashi, was a founder of CAIR’s Texas chapter.

Created in 2006, AMP is the byproduct of now-defunct groups formerly affiliated with the Palestine Committee, including HLF. AMP celebrates violent uprisings (intifadas) against Israeli civilians, and in January 2020, AMP’s Executive Director, Osama Abu-Irshaid, threatened, “Palestinians, if they don’t take what they want willingly, they will take it forcefully… [W]e’re going to liberate our land… whether they like it or they don’t like it.”

ICNA is the American arm of South Asian Islamist group Jamaat-e-Islami (JI), a body openly sympathetic to the Taliban and al-Qaeda. For 30-plus years, ICNA has harbored a convicted former JI death squad leader, Ashrafuz Zaman Khan, placing him within ICNA’s top leadership. ICNA has, as well, collaborated with and promoted Lashkar-e-Taiba (LeT), the group that perpetrated the November 2008 Mumbai, India terror attacks.

Beginning November 14th, CAIR-Texas led a three-day mission to advocate for the release of al-Qaeda-related terrorist Aafia Siddiqui. Co-sponsoring the event was ICNA, AMP and MAS.

Aafia Siddique, a Pakistani-born neuroscientist, began volunteering for the Al-Kifah Refugee Center – al-Qaeda’s then-hub in the US and the group responsible for the 1993 World Trade Center bombing – as a biology student at MIT. While at MIT, Siddiqui took up arms training, in hopes of joining the jihad overseas to help her fellow Muslims in Bosnia. Upon graduation, she was engaged to be married. According to the Boston Globe, her then-husband accused her of being “militantly anti-American.” Osama bin Laden, according to the Globe, was her “hero.”

Subsequent to the 9/11 attacks, Siddique left for Pakistan. Khalid Sheikh Mohammed, the mastermind of the attacks, identified her as an al-Qaeda accomplice, and the FBI placed her on its ‘most wanted’ list. In July 2008, Siddique was arrested with what were believed to be bomb-making instructions and chemicals. The next day, while being interrogated, Siddiqui allegedly picked up a rifle and began shooting at US military officers and FBI agents. In February 2010, Siddiqui was found guilty of attempted murder and later was sentenced to 86 years in prison.

The three-day event calling for Siddiqui’s freedom followed a September rally in support of Siddiqui, sponsored by the same four groups, and a discussion about the campaign to free Siddique, which took place November 11th and was sponsored by CAIR-Texas and MPower Change. The rally, the discussion, and the three-day event all featured CAIR-Texas Executive Director Faizan Syed and Siddiqui’s attorney and former CAIR-DFW (Dallas-Fort Worth) President Marwa Elbially.

Syed is a zealot, who champions polygamy and shuns music. In April 2015, he wrote, “Jihad is just war doctrine for Muslims around the world. When groups do not follow the tenants of that doctrine then they… fail to attain the God given awards for it. Jihad is something to be proud of just as Americans are proud of their involvement to overthrow Nazis in WWII.” In July 2016, he wrote, “I along with every Muslim believe in Sharia.” Syed deceptively calls Palestinian terrorist groups “basically small militias,” Hamas rockets “makeshift projectiles,” the Muslim Brotherhood a “mainstream Islamist movement,” and democracy an “old and dying political system.”

Elbially, a Muslima, has been visiting Siddiqui in prison, since January 2021. This is unlike the experience that Siddiqui’s original attorneys had with her, as Siddiqui refused to speak with them because she believed they were Jewish. According to Siddiqui, in a handwritten document about her case, filed with the court in July 2009, “Jews… have back-stabbed everyone who has taken pity in them and made the ‘fatal’ error of giving them shelter… It is this back-stabbing of the Jews that has caused them to be mercilessly expelled from wherever they gain strength. This is why ‘holocausts’ keep happening to them repeatedly.”

The November 11 discussion also featured as a speaker Executive Director of Mpower Change, Linda Sarsour. Sarsour has justified terrorist attacks on Israeli civilians and has repeated the anti-Semitic tropes of Jewish dual loyalty and what she refers to as “Jewish media.” In September 2019, she was forced to resign from her position as National Organizer and Co-Chair of the Women’s March, due to her alleged embrace of bigotry against Jews and LGBTQ. In August 2020, the Joe Biden for President Campaign condemned Sarsour for her anti-Semitism (Though, following an outcry from Muslims, the Biden Campaign privately apologized.)

The latter November affair additionally featured AMP representative Taher Herzallah. Herzallah has used his Twitter account to render dead Palestinian terrorists “martyrs” and to promote and openly communicate with Hamas-run media. According to NGO Monitor, he has described Hamas rockets as “effective” and labeled a photo of wounded and bloodied Israeli soldiers “the most beautiful site in my eyes.” During AMP’s 7th Annual Conference for Palestine in the US, held in November 2014, Herzallah posed the following rhetorical question targeting the Jewish state with violence: “What if, as Muslims, we wanted to use violent means to resist occupation?”

Given the extreme nature of the groups and individuals involved in these events, it makes sense that they would participate in such a vile endeavor as to call for the freedom of Aafia Siddiqui, a cold-blooded terrorist. Indeed, it fits a pattern that they have followed for decades, whether it is with al-Qaeda operatives like Siddiqui, Hamas operatives like those involved in the Holy Land Foundation, Palestinian Islamic Jihad operatives like Sami al-Arian and his associates, or the myriad of other terror-linked individuals they too have said were innocent. For CAIR, AMP, ICNA and MAS, all of them are nothing but innocent, merely following Faizan Syed’s doctrine of jihad.

Siddiqui, for her crimes, should remain in prison for her full 86 year sentence (until death). There is no justification whatsoever to release her sooner.