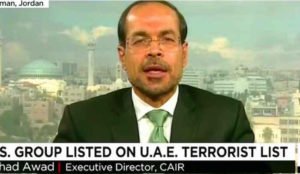 The Council on American-Islamic Relations (CAIR) has joined in the condemnation of monuments dedicated to Confederate soldiers who fought in the American Civil War (1861-1865).

On November 10, 2021, CAIR “welcomed a vote by Virginia’s Washington County Board of Supervisors to remove several Confederate monuments from outside a local courthouse.” CAIR National Communications Coordinator Ismail Allison stated, “People who betrayed this nation in order to preserve white supremacy and slavery do not deserve to be honored, especially not on public land.”[1]

However, CAIR’s appreciation of the action taken by the Washington County Board of Supervisors soon turned to condemnation because of a change that Board made by a unanimous decision. On December 15, 2021, CAIR “condemned a decision by Virginia’s Washington County to relocate two Confederate monuments to a space outside a government building.” CAIR National Communications Coordinator Ismail Allison said, “By moving these monuments to treason from outside a courthouse to outside another government building, the Board of Supervisors is allowing for the continued reverence of white supremacy and systemic anti-Black racism.”[2]

One is only a righteous believer [Muslim] or a doomed evildoer.[4]

So according to Muhammad, and Koran verses such as 3:110, 98:6 and 98:7, regardless of skin color Muslims are inherently superior to non-Muslims.

CAIR also seems particularly incensed about the existence of slavery in the United States during a particular time period. Perhaps CAIR should be similarly incensed about slavery when it comes to their prophet Muhammad, because Muhammad was a slave owner and dealer. And as we are well aware, Muhammad is the perfect example for Muslims to follow today.

Muhammad was a slave owner and dealer

Muhammad happened to own a number of black slaves. He:

And there are numerous other authoritative reports in which Muhammad was personally involved in possessing, buying, selling, and giving away slaves in general. Here are some eye-opening stories about Muhammad and his dealings with slaves:

The “Slave Concubines” of Muhammad[24]

Mariyah was a Coptic Christian given to Muhammad by al-Muqawqis, the ruler of Alexandria. She bore Muhammad a son named Ibrahim. When Muhammad was informed of Ibrahim’s birth by Abu Rafi, Muhammad gave Abu Rafi the gift of a slave because of the good news.[26] Ibrahim died as a young child in January 632.

Mariyah was the female slave mentioned in the following hadith where two of Muhammad’s wives were angry about a particular time he had intercourse with a female slave. This resulted in the “revelation” of 66:1 of the Koran, a portion of which is mentioned at the end of this hadith:

It was narrated from Anas, that the Messenger of Allah had a female slave with whom he had intercourse, but ‘Aishah and Hafsah would not leave him alone until he said that she was forbidden for him. Then Allah, the Mighty and Sublime, revealed: “O Prophet! Why do you forbid (for yourself) that which Allah has allowed to you, until the end of the Verse.”[27]

The Tafsir Al-Jalalayn noted that Hafsa was angry because while she was away, Muhammad had slept with Mariyah in Hafsa’s bed.[28]

Rayhanah was among the captives when the Muslims defeated the Banu Qurayzah, and she was chosen by Muhammad. Some reported that Muhammad freed her after she accepted Islam and married her in 627, while others reported that she remained his slave girl.[29] She died soon after his return from the Farewell Pilgrimage in February 632.

In one source it was reported that Muhammad also had two more slave girls. Jamilah, a captive, and another one, a bondwoman granted to him by Zainab bint Jahsh.[30]

And Ibn Ishaq wrote that on one occasion Muhammad had been given “four slave girls,” one of whom was Mariyah.[31]

According to a prize-winning 20th Century biography of Muhammad, he did not free his own slaves until the day before he died.[32]

CAIR’s criticism of slavery in the United States during a particular time period would have more credibility if they were to also acknowledge that Muhammad possessed, bought, and sold slaves, and then to criticize Muhammad’s extensive involvement in that slave trade. Until then, CAIR’s criticism of the Confederacy rings somewhat hollow.

Safiyyah had been among the captives taken when the Jewish community of Khaybar was defeated. The Muslims also captured two female cousins of Safiyyah, who Muhammad gave to Dihya b. Khalifa al-Kalbi, one of his Muslim warriors – see Muhammad ibn Ishaq, The Life of Muhammad (Sirat Rasul Allah), trans. Alfred Guillaume (Karachi, Pakistan: Oxford University Press, 2007), p. 511.

[18]         The first four caliphs after Muhammad’s death were Abu Bakr, ‘Umar, ‘Uthman and ‘Ali. These four caliphs were called the “Rightly Guided” Caliphs because they are believed to have held the most firmly to the teachings and example of Muhammad.

[21]         Sahih Al-Bukhari, Vol. 3, Book 51, No. 2594, p. 442. Muslim women also had slaves. According to the four major Sunni schools of Islamic Sacred Law it is not permissible for a man to have intercourse with his wife’s slave girl, even if the wife gave her permission – see Muhammad ibn ‘Abd Ar-Rahman as-Safadi, The Mercy in the Difference of the Four Sunni Schools of Islamic Law, Trans. Aisha Bewley (Dar Al Taqwa: London, 2004), p. 190.

[29]         The History of al-Tabari: The Last Years of the Prophet, n. 909, p. 137. Ibn Ishaq did not indicate that Muhammad freed Rayhanah; instead, Ibn Ishaq wrote that Rayhanah “remained with him until she died, in his power” – see The Life of Muhammad (Sirat Rasul Allah), p. 466. That she was Muhammad’s “captive” instead of a freed woman was also pointed out in The Sealed Nectar, p. 565. In listing “slave girls” owned by Muhammad, Ibn Kathir identified Rayhanah as Rayhanah bint Sham’un An-Nadariyyah – see Tafsir Ibn Kathir, Vol. 7, p. 720. Rayhanah was not listed as being among Muhammad’s wives in The Honorable Wives of the Prophet, ed. Abdul Ahad (Riyadh, Kingdom of Saudi Arabia: Darussalam, 2004).