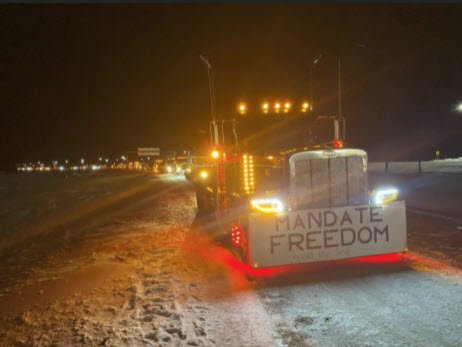 Truckers caused serious disruptions at crossing points between the United States and Canada on Monday to protest COVID-19 vaccine mandates that threaten their livelihoods — and that experts warn could have major ramifications for trade between our two countries.

Dozens of big rigs slow-rolled along Highway 75 near the U.S.-Canada border, clogging access to the border checkpoint and causing delays, to protest mandates that could leave thousands out of work and exasperate problems for an already precarious supply chain in North America.

Starting Saturday, Canada’s federal government ordered that all unvaccinated Canadian truckers returning from the U.S. must quarantine for two weeks and foreign drivers who are unvaccinated no longer can cross into Canada, according to CBC.

Meanwhile, Beginning on Tuesday, the Biden administration will require all foreign drivers to show proof of vaccination to enter the U.S., Reuters reported.

Truckers say these mandates could have “detrimental” impacts on their industry.

“We need to end all of these totalitarian mandates that our government has imposed on us for the last two years,” Rick Wall, president of a trucking firm and the organizer of Monday’s protest, told CBC.

“This is put on by truckers, but we are calling to end all mandates for every single human being in this country, not just for us,” he said. “It’s extremely frustrating.”

Displaying signs opposing the vaccine requirement with slogans such as “Stop Mandates,” “Stop Fascists” and “Freedom to Choose,” truckers and some other vehicles moved in a slow loop between the Emerson, Manitoba, port of entry and the weigh scales.

The slow-roll protest did not block any lanes but slowed traffic considerably in the area, according to CBC.

WATCH: Canadian truckers against Covid mandates BLOCK all lanes of traffic to and from the United States.

In the early morning hours on January 17, 2022, a truck convoy descended near the U.S.-Canada border in Emerson, Manitoba, Canada to protest the vaccine mandate policies both the U.S. and Canada are implementing. pic.twitter.com/WuvVxsnsfc

“We basically all stand in unity,” Wall explained. “When the trucking community unite and stand together, we can create change with the support of others and that’s what we’re trying to accomplish out here.”

Rob Penner, CEO of Winnipeg-based Bison Transport, said that while his company is “on board” with the requirement, some of his drivers are now in “limbo” as those who have not been vaccinated are stuck doing domestic routes.

All the while, he told CBC, cross-border truckers have very little contact with others to begin with and had the lowest number of COVID-19 cases in the transport business.

Penner also noted that it’s the consumer who is going to get hit with increased costs thanks to the stringent Canadian and American vaccine requirements.

That is causing issues for an already strained supply chain as the $45 billion worth of goods that travel between the U.S. and Canada each month rely on steady open travel over the border.

“The new rules could cause a bigger disruption to cross-border shipments than the outbreak of the virus did in March 2020,” Skerritt wrote.

“At the time, Trudeau’s government and the Trump administration agreed to close the land border to non-essential travelers, but trucks were allowed to keep moving,” she said. “The deal helped quell some of the panic in Canada from consumers who rely on food imported from the U.S. and Mexico, especially in the winter.”

Now, however, Canadians are likely to see even more empty shelves at the grocery store. Sylvain Charlebois, a professor and Canadian food supply chain expert, told Skerritt that as the omicron variant slows down the food industry, the vaccine mandate “could add fuel to the fire.”

A separate Bloomberg report noted that the cost of importing produce from Arizona and California to Canada just jumped 25 percent, and some industry insiders say they’re hearing rumors companies are looking to stop shipping perishable goods altogether. Much of Canada’s produce is transported from the U.S, where it is either grown or received from South America at American ports and then driven north.

Trudeau and Biden’s mandates for truckers target an industry that transports 70 percent of goods between their two countries, and as the Biden federal mandate for private employers was halted by the Supreme Court last week, an industry with already low vaccination rates is unlikely to increase the roughly 50-60 percent of truckers who have gotten the jab.

It’s not as if North America was experiencing a shortage of supply chain crises and massive hits to the working and middle classes.

How many workers will be affected by disruptions caused by these mandates? It’s not just the truckers, it’s the workers in all the other industries that rely upon transport to do their business, as well as the consumers.

We’re talking about potentially millions of people whose livelihoods and economic stability are going to be threatened because Trudeau and Biden want to require truckers to get vaccinated — the same truckers who made sure that goods were transported at the peak of the pandemic when no one was vaccinated.

The delays they caused on Monday are just a drop in the bucket compared with what these far-reaching mandates will do to their industry — and to the rest of us.