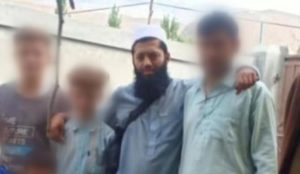 Jihad Watch covered the fact that Malik Faisal Akram, the jihadi who was shot dead after taking four people hostage at a Texas synagogue, was investigated by MI5 to assess his level of security threat. Investigators at MI5 concluded that he posed no credible threat.

Jen Psaki also stated that Akram “was checked against US government databases ‘multiple times’ before he entered the country” and evidently, he was deemed not to pose any security threat. This was despite his criminal record.

But now comes a bombshell: Malik Faisal Akram, who was said to have “mental issues,” as is said of virtually all jihadis in the West, was referred to the UK counterterrorism PREVENT program in 2016. So he was indeed a known security threat. His family had also previously told the Daily Mail “how Akram’s descent into more extreme religious views and his controlling behaviour had led to the marriage breakdown.” As it turns out, two Muslims were also arrested in connection with Akram’s Texas synagogue hostage taking.

As an aside, “Ali Harbi Ali, 25, the man who is accused of, and denies, murdering the Tory MP in a knife attack in his constituency of Southend in October, had been referred to Prevent some years ago.”

Ali and Akram both proved to be a high security threats, showcasing just how ineffectual MI5 and other so-called counterterrorism government “experts” are in understanding the threat of jihad, which is rooted in Islamic doctrine and history.

Yet “it was also claimed at an inquest into the London Bridge Terror that Prevent officers had ‘no specific training’ in handling terrorist offenders.” How could this be, given its mandate?

Prevent also boasts of its “uniqueness in that it involves all parts of Government, such as the Home Office, the Cabinet Office, the Foreign and Commonwealth Office and the Department for International Development.”

Involving “all parts of government” isn’t reassurring. The UK Home Office is allowing in tens of thousands of illegal Muslim migrants via the English Channel, with no knowledge of their backgrounds. This in itself shows the extent of the disregard the British government has for national security. Also, any country’s government which has allowed the “Islamophobia” stratagem to gain influence  is both clueless and dismissive about the roots of jihad terror. The jihad thrives by means of intimidation tactics and under a cover of silence and inaction. It behooves Islamic states and Islamic supremacist lobbies to stealthily support the shutdown of criticisms of Islam in the West, presenting such criticisms as “hurtful to Muslims” and as “racist.” Western governments and counterterrorism “experts” continue to fall for this simple trick.

So what is the next step, now that it is known that Akram was under suspicion for jihad terrorism but was still allowed to slip through government-run high-level security agencies like MI5 and Prevent, and was then allowed to enter the US on a tourist visa, when he was actually known to intelligence agencies in the UK? Likely nothing much. At the end of the news cycle, the kowtowing and appeasement of Muslims to satisfy determined Muslim Brotherhood-linked groups will continue. And the phobic avoidance of being labelled “Islamophobic,” along with political pandering for the Muslim vote, will also continue, with no regard for public safety.

“British synagogue terrorist was referred to PREVENT: More questions for security services as its revealed hostage taker, 44, was flagged to counterextremism scheme in 2016 after bitter split from wife”, by James Robinson and Martin Robinson, MailOnline, January 21, 2022:

Security forces in the UK are fresh questions today after it was revealed the Blackburn terrorist shot dead as he held up a synagogue in the US had previously been referred to counterextremism scheme Prevent.

In the latest embarrassment for UK counter-terrorism officials, it was revealed that Malik Faisal Akram, 44, had been referred to the anti-terror programme following the breakdown of his marriage and concerns over his growing extremist views.

The 44-year-old was also investigated by MI5 in December 2020, when British spies watched him for a month.

However the father-of-six, who was shot dead by FBI SWAT teams last week while holding up a Texas synagogue, was not considered a terrorist threat, despite multiple reports he had been radicalised.

The fresh revelations will heap yet more pressure on the Home Office over Prevent, which is already under scrutiny following the death of MP Sir David Amess and a series of high-profile failures.

Ali Harbi Ali, 25, the man who is accused of, and denies, murdering the Tory MP in a knife attack in his constituency of Southend in October, had been referred to Prevent some years ago.

There was outrage last year after it was revealed the anti-extremism programme had been warned by refugee groups that Reading terrorist Khairi Saadallah, 27, who stabbed to death three friends in the Berkshire town, would carry out a ‘London Bridge style’ attack.

And it was also claimed at an inquest into the London Bridge Terror that Prevent officers had ‘no specific training’ in handling terrorist offenders.

The Home Office have refused to comment on the claims, first reported in The Times, saying that Akram’s death is the subject of a police investigation.

The paper reports that the referral was made in 2016, as Akram’s marriage broke down.

His brother, Gulbar Akram reportedly told the paper that his sibling was ‘bitter’ about his ex-wife Farzana after she took custody of their six children.

The marriage had been arranged in 2004 in the village of Jandala, about 70 miles southeast of Islamabad, where her family remained.

Family members told the Times that Akram, who ran a chain of pharmacies in the north-west, had helped pay for their family’s mansion – said to be the ‘second biggest house’ in the village.

‘He paid for all her brothers to get jobs abroad and paid for her father’s cancer drugs and treatments,’ Mr Akram said.

‘The pharmacy chain was in his wife’s name. He was bitter because he felt like she took everything away from him when they split up, especially his children.’

It is understood that Akram was given a 28-day domestic violence protection order at a magistrates’ court in May 2016.

His wife moved with the children to Liverpool and then to Manchester. His two eldest son would visit him in Blackburn.