During a visit to the Sheikh Zayed Grand Mosque in Abu Dhabi on Monday, President Isaac Herzog said the Middle East had a stark choice of possible futures, between one of hope and peace and another of Tehran-led chaos.

“There are only two alternatives for this region,” he said, standing outside the mosque in the capital of the United Arab Emirates.”One is peace, prosperity, cooperation, joint investments and a beautiful horizon for the people, or alternatively, what Iran is doing, which is destabilizing the region and using its proxies to employ terror. These are the two alternatives, and this visit symbolizes hope, peace, and a great future for our nations, the region, and the world at large.”

The night before, the UAE announced it shot down a ballistic missile fired at it by the Iran-backed Houthi terrorist group.

Herzog and his wife, Michal, concluded their historic visit to the UAE with the mosque tour.

The first lady was presented with a bespoke traditional robe, and the president signed the mosque guest book. They were then given a tour explaining the mosque’s architecture and construction.

Herzog summarized his trip as  “very moving, historic, and exciting.”

“Part of the novelty of the UAE is the combination of an innovative spirit and forward-thinking approach, with deep respect for the glorious Muslim tradition,” the president said. 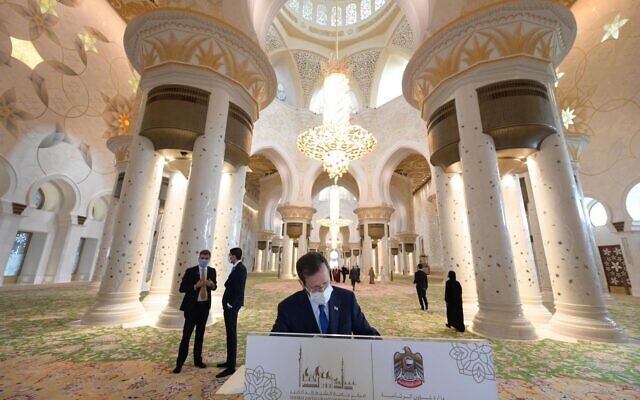 “We admire the course you have charted,” he declared.

Herzog and the first lady were welcomed at the Dubai expo with an honor guard, followed by the raising of Israel’s flag at the site’s central plaza and the playing of “Hatikvah,” Israel’s national anthem.

“Israel is a country in which obstacles become opportunities, and where the impossible is a tantalizing challenge,” Herzog said in a speech. “This pavilion has provided a phenomenal taste of what we have to offer — from water tech and sustainable agriculture to public health to smart cities and groundbreaking solutions for a circular economy.”

He called the pavilion “a practical display of cooperation between nations, of the future we can all imagine. This imagination turned into reality right here, when the UAE and its leaders daringly signed the historic Abraham Accords.” 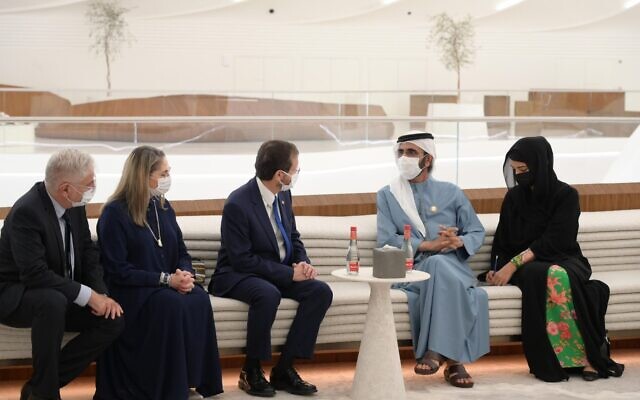 Herzog concluded his remarks in Arabic, saying, “May God bless you and grant you long lives. Thank you very much.”

Speaking before Herzog, Sheikh Nahyan bin Mubarak Al Nahyan, the UAE’s tolerance and coexistence minister and Expo 2020 Dubai commissioner-general, said, “Israel has much to offer on our global platform.”

According to the president’s office, the two men discussed the bilateral relationship in trade, investment, tourism, and innovation.

Israel and the UAE forged ties in the United States-brokered Abraham Accords in 2020, bringing over a decade of covert contacts into the open, and have seen their relationship flourish since then.

Herzog and his wife landed in Abu Dhabi on Sunday morning for the first-ever official visit by an Israeli president to the UAE. 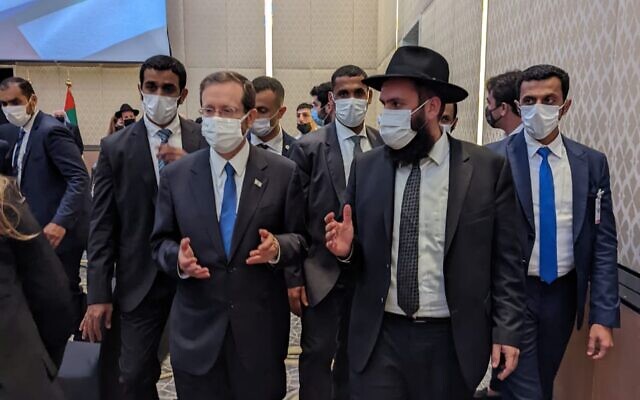 Meeting with Jewish leaders Sunday night, Herzog expressed his thanks to the UAE’s powerful Crown Prince Sheikh Mohamed bin Zayed — known as MBZ — calling the UAE’s de facto ruler “a bold leader, an amazing leader with whom I spent a few hours today and from whom I drew immense inspiration.”

Rabbi Elie Abadie, senior rabbi of the Jewish Council of the Emirates, told The Times of Israel that “it was emotional to see the president of the State of Israel here in an Arab country for the first time in history.”

Earlier in the day, Herzog met with MBZ for over two hours.

The president and first lady were given a festive welcome by the UAE’s Foreign Minister Sheikh Abdullah bin Zayed, which included the playing of both countries’ national anthems, and a 21-gun salute. Afterward, they held a working meeting, then had lunch with members of Herzog’s delegation.

During the journey from Israel, the president’s plane flew over Saudi Arabia, a powerful Sunni state with which Israel does not have formal diplomatic relations. According to Herzog’s office, he entered the cockpit to view the Saudi desert, and remarked: “Without a doubt, this is truly a very moving moment.”

In December, Prime Minister Naftali Bennett met with MBZ at the latter’s palace in Abu Dhabi, as part of the first official visit by an Israeli premier to the UAE. In June, Foreign Minister Yair Lapid officially inaugurated Israel’s embassy in the UAE.

According to Bennett’s office, bin Zayed is expected to visit Israel at the prime minister’s invitation.