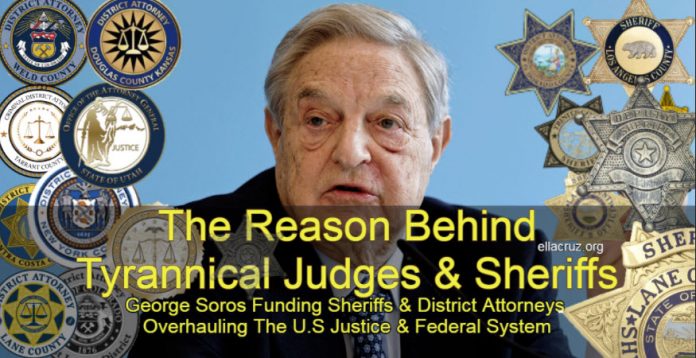 Here are the latest outrages perpetrated by the Soros DAs, the prosecutors who won’t prosecute because they think criminals are an oppressed class.  More like privileged class, where the Soros DAs are in control.

In 2014, a transgender biological male grabbed a 10-year-old girl by the throat in a Denny’s and sexually assaulted her in a bathroom.  The offender was a juvenile at the time but an adult now.  He just received two years in a juvenile facility for the crime.  The judge’s hands were tied because Los Angeles DA George Gascón could have transferred the case to adult court, but refused to do so.  So an adult is in juvy because of this DA.  But that’s not all.  Los Angeles County Sheriff Alex Villanueva, a Democrat, went around Gascón and got the feds to prosecute four individuals involved in the gang killing of a Los Angeles police officer.  A second effort to recall Gascón is underway.

A recall effort is also underway against San Francisco DA Chesa Boudin who a whistleblower just accused of withholding evidence in a case.  A police officer was accused of using excessive force, but the whistleblower says she felt she would be fired from her investigator’s job unless she kept quiet about a witness who saw the offender beating a woman before the officer used his baton.

More than a dozen prosecutors in Manhattan have quit because the new DA Alvin Bragg is soft on crime.  “They didn’t want to work in this kind of office. They wanted to continue prosecuting the law,” a source told the New York Post.  Bragg is bought and paid for.  George Soros donated $1 million to get Bragg elected.  The wife of slain New York City police officer Jason Rivera just slammed Bragg while speaking at her husband’s funeral, saying “the system continues to fail us,” her husband did not like New York’s new laws coddling criminals, and she hoped the new DA was watching her husband speak through her now.

Murder and crime rates are up in many Democrat-run cities where Soros DAs have been elected.  As of 2018, Soros had bankrolled 21 DAs, and those are just the ones we know about.

It’s nice to see more people taking action against some of the Soros DAs, with recalls and ethics disciplinary hearings, as well as a no-confidence vote in Los Angeles. In Pennsylvania, Republican Senate majority leader Jake Corman has moved to have Soros-backed Philadelphia DA Larry Krasner impeached because of skyrocketing crime in the city.

Corman is the exception among Republicans.  Here’s my question:  Where are the Republican state legislators in all this?  Why haven’t any of these Soros DAs been hauled up before state legislative hearings and grilled about usurping legislative authority – what do you mean you aren’t going to enforce the laws we passed?  Why aren’t legislators more protective of their own power?  Republicans control state legislative houses in places like Virginia where there are Soros DAs.  Even where Republicans are not in control, like in California, they could hold their own hearings and call in the press, like U.S. Senator Ron Johnson just did on COVID.  I’ve just started a new team to throw a spotlight on things like this where Republicans are falling down on the job.  We’re going on a RINO hunt.  You’ll be hearing more about my team’s activities from me in the future.