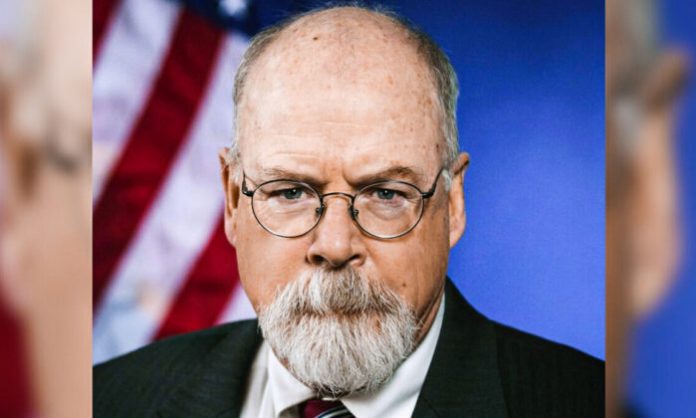 Special counsel John Durham’s team alleged on Feb. 12 that a tech executive aligned with the Democratic Party was paid to spy on former President Donald Trump’s residences and the White House when Trump was president.

Lawyers for the Clinton campaign allegedly paid the technology executive to infiltrate servers at the Trump Tower and the White House, Durham said in court filings (pdf), in order to establish an “inference” and “narrative” to tie Trump to the Russian government. Durham’s office made the claim as part of his investigation that had brought charges against Michael Sussmann, a lawyer who had worked on behalf of the Democratic National Committee and Hillary Clinton’s 2016 campaign and who is currently charged with making a false statement to the FBI.

Durham alleged Sussmann “had assembled and conveyed the allegations to the FBI on behalf of at least two specific clients, including a technology executive (Tech Executive 1) at a U.S.-based internet company (Internet Company 1) and the Clinton campaign,” according to a section in the court filing, titled “Factual Background.”

Billing records he obtained suggest that Sussmann “repeatedly billed the Clinton Campaign for his work on the Russian Bank-1 allegations” and that the unnamed technology executive met and communicate with Mark Elias, a left-wing lawyer and operative who has filed numerous election-related lawsuits on behalf of the Democrats. Sussman previously pleaded not guilty and accused Durham of acting in a politically motivated manner.

“Tech Executive-1 also enlisted the assistance of researchers at a U.S.-based university who were receiving and analyzing large amounts of Internet data in connection with a pending federal government cybersecurity research contract,” Durham’s filing states.

The executive also “tasked these researchers to mine Internet data to establish ‘an inference’ and ‘narrative’ tying then-candidate Trump to Russia,” the filing states, adding that the technology firm that the executive worked for “had come to access and maintain dedicated servers” for Trump’s executive office.

“Tech Executive-1 and his associates exploited this arrangement by mining the EOP’s DNS traffic and other data for the purpose of gathering derogatory information about Donald Trump,” Durham’s filing reads. EOP refers to Trump’s office, while DNS traffic refers to traffic coming in and out of a server.

Durham further wrote that Sussmann “provided an updated set of allegations—including the Russian Bank-1 data and additional allegations relating to Trump” to another federal agency that isn’t the FBI. Claims that Sussmann provided in a meeting in February 2017 relied on “the purported DNS traffic that Tech Executive-1 and others had assembled pertaining to Trump Tower, Donald Trump’s New York City apartment building, the EOP, and the aforementioned health care provider,” according to Durham.

Sussmann, his court filing added, “provided data which he claimed reflected purportedly suspicious DNS lookups by these entities of internet protocol addresses affiliated with a Russian mobile phone provider” in the February 2017 meetings. Sussmann also said such DNS lookups “demonstrated that Trump and/or his associates were using supposedly rare, Russian-made wireless phones in the vicinity of the White House and other locations,” which Durham described as false.

After Durham’s court filing was unsealed, Trump on Feb. 12 issued a statement claiming it provided “indisputable evidence” his campaign and office were being spied on by Democrats in a bid to connect him to the Russian government. The former president has long decried the Trump–Russia collusion narrative as a falsified witch hunt designed to imperil his political chances while bolstering left-wing mainstream media outlets’ ratings.

“This is a scandal far greater in scope and magnitude than Watergate and those who were involved in and knew about this spying operation should be subject to criminal prosecution,” Trump stated.

And Kash Patel, a former U.S. intelligence official who hosts EpochTV’s “Kash’s Corner,” said the filing reveals a “most intricate and coordinated conspiracy” to target Trump while he was a candidate and later as president.