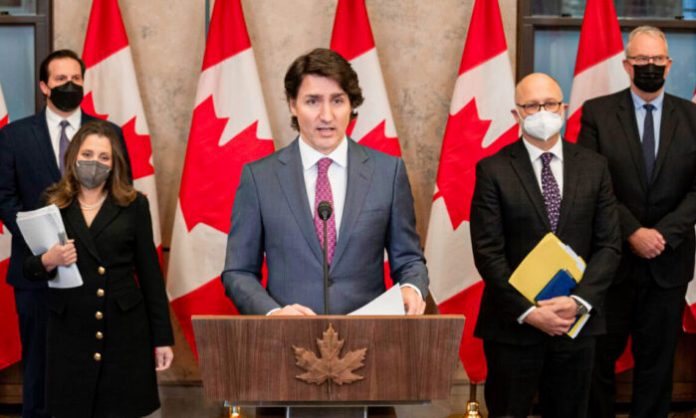 With the stroke of a pen and an announcement from a podium, Canadian Prime Minister Justin Trudeau has essentially declared himself supreme dictator over the nation on our northern border.

We now have a full-on totalitarian regime adjacent to the United States. This is no small development. So let’s break it down.

The Canadian Civil Liberties Association has condemned Trudeau for invoking the Emergencies Act, claiming in a tweet that the Canadian federal government “has not met the threshold necessary” to do so.

The federal government has not met the threshold necessary to invoke the Emergencies Act. This law creates a high and clear standard for good reason: the Act allows government to bypass ordinary democratic processes. This standard has not been met. 1/3

“The Emergencies Act can only be invoked when a situation “seriously threatens the ability of the Government of Canada to preserve the sovereignty, security and territorial integrity of Canada” and when the situation “cannot be effectively dealt with under any other law of Canada,” the Twitter thread continues.

By invoking this Act, the first time it’s ever been done in Canadian history, Trudeau has essentially declared a form of martial law. This petty dictator has apparently made himself available to the global predators and offered up his country to be the first in the formerly Free World to transition from freedom into the grand utopia of the Great Reset.

And we thought it would take a war or an economic collapse to get the Western democracies to implement the Great Reset. No. It can be done with the stroke of a pen under the guise of a fake “emergency.”

This form of martial law targets a select group of Canadians who are exercising their right to peaceful protest under the Canadian Charter of Rights and Freedoms, but now they have been branded as criminals. Bank accounts are being frozen with no due process, licenses suspended, people arrested.

But according to the Civil Liberties Association, Trudeau is illegally invoking the Act because the nation has not met the threshold laid out in the law to qualify as a legitimate national emergency.

Lori Williams, a politics professor at Mount Royal University in Calgary, told Reuters that “there’s the danger this could create more problems,” calling the powers “enormous.”

“That’s why this has to be done with the cooperation of premiers and if they don’t want help, then the federal government needs to hang back.”

Leah West, an assistant professor at Carleton University in Ottawa, doubted the move met the standards, posting on Twitter that the country’s sovereignty is not endangered by the largely non-violent protests.

So who is the real criminal here?

This should be a lesson for all Americans and citizens of other Wester nations. Trudeau is obviously not the person in charge of making such drastic decisions, no more than Biden is in charge here in Washington, D.C., or Macron is in charge in Paris or Johnson in London.

Trudeau answers to the Davos elites committed to the agenda of the World Economic Forum.  We have already covered that in our recent three-part series here at LeoHohmann.com and if you haven’t read those yet, I encourage you to do so.

Globalists are coming for your cars, your cash and your bodily integrity

Globalists aren’t just coming for your cars and your cash; they also want your steaks, burgers and bacon

The World Economic Forum globalists play dirty. That’s why we call them global predators. They hire and train politicians who are known psychopaths like Trudeau in Canada and Macron in France, or sell outs like Obama/Biden in the U.S. and Ardern in New Zealand.

None of Trudeau’s actions should be viewed as that of a national leader. He is simply implementing the tactics he learned at WEF founder Klaus Schwab’s Young Global Leaders program, from which he is a graduate.

Hence, any of the other Western nations now being “led” by politicians also committed to the WEF vision of the world would act exactly the same way given the same set of circumstances in their countries.

We know Biden is one of their cronies. He even named his landmark piece of legislation after the WEF slogan, “Build Back Better.”

The global predators knew their forced masking and mandated injections would eventually lead to worldwide uprisings and civil unrest. They predicted it in the Rockefeller Foundation document from 2010 called Lockstep. How to handle these popular uprisings was all discussed and rehearsed ahead of time – label them as criminals and hit them where it hurts, shut down their finances.

This is the Great Reset, in our faces. You obey, you get to keep a semblance of your normal life, though it will be nothing like your pre-Covid life. You disobey your new masters and you get otherized and canceled from society. We’ve been talking about the Great Reset in theory for a year and a half. Now we have a clear example of how it works, right over our northern border.

In some ways, Trudeau’s invoking of the Emergencies Act is worse than a military martial law. This is digital/economic warfare against the Canadian population. At least with the military you can see the enemy. This is worse.

Trudeau didn’t even have to stage a false flag attack like Hitler did with the Reichstag fire. All he had to do was use his state-run media to label his political opponents, who are entirely peaceful, as white nationalist extremists. The state-funded Canadian media happily went along with his game plan. The U.S. media would do the same.

Trudeau has empowered banks to go after his political opponents while releasing these banks from all legal liability for their actions. This man is a traitor to his nation and his people. A monster.

We have the same NWO freaks in every Western capital, ready to follow Trudeau’s example should their people get out of line.

We also have them in the churches.

Bergoglio in the Vatican is another one of their henchmen, willing to advocate any policy, no matter how anti-God and anti-human, if the order is given by the right elitist power broker. We know he’s friends with Schwab.

Lest you think only the Catholics have their players in this realm, think again. On the Protestant side they’ve got preachers like Franklin Graham, Tim Keller, Rick Warren, Robert Jeffress, TD Jakes and many others willing to whore themselves out for the New World Order.

Knowingly or unknowingly, the leaders of almost every 501c3 church, when push comes to shove, will toe the line of the new world order’s Great Reset and Fourth Industrial Revolution. Many are signing up now for Mark Zuckerberg’s Metaverse church services. Zuck is another graduate of Scwab’s Young Global Leaders program.

Take heed, Patriots. They are coming after your bank account.

Tribulation is here, folks. Whether you want to assign a capital “T” or a small “t” to that word, it’s here. God have mercy. Christ have mercy.

Why are Biden’s handlers still trying to strike a deal with the rogue Iranian regime?

Trudeau’s Trucker Terrorists: Why The Emergency Powers Endanger The Rights Of All Groups