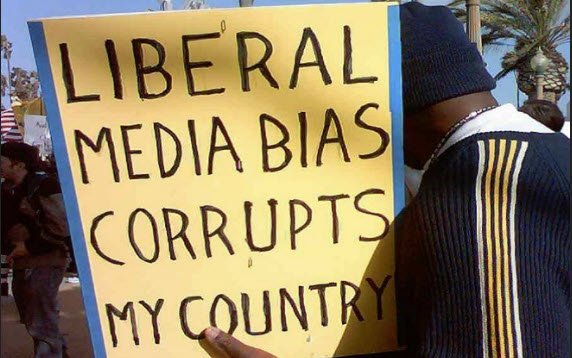 I had a relative tell me over the holidays he will not consult any media sources on the political Right because they are all “fascistic” and “reactionary”, whatever that means.  He is quite content to live in ignorant bliss of what half the world thinks and says.  Even though he admitted to me it’s important to get both sides of the story, he won’t, he refuses.

This reminds me that I’ve steadily been clipping stories about the outrages perpetrated by large media outlets which, in case you haven’t noticed, all tilt Left and do their best to keep important information, like the Hillary Clinton campaign and governmental spying on Donald Trump, away from you.

Just last week, an editor at Politico admitted using an unfair poll in its coverage of former Missouri Governor and now U.S. Senate candidate Eric Greitens.  The editor admitted in an email to the Greitens campaign the anonymous poll was “unfair” and using it went against the publication’s usual standards.  Critics said the poll did not disclose who paid for it, the sample size, or the results for other candidates.  They also said, for all we know, the poll was just done among the reporters inside Politico’s newsroom.  They also suggested the poll was cooked up by Washington insiders who don’t want to see Greitens elected and Politico was only too happy to play along.

Earlier this year, NPR’s Nina Totenberg reported the fake news that Justice Sotomayor was staying home because Justice Gorsuch wouldn’t wear a mask.  Gorsuch and Chief Justice John Roberts rebuked Totenberg in statements they issued denying what she had alleged.

NPR also tried and failed to debunk reporting from a conservative media outlet about election fraud in Michigan.  NPR tried to claim an election audit had been performed there, but neglected to tell listeners the so-called ‘audit’ was just a small review of procedures, not ballots.  NPR also claimed no one is denying vans mysteriously showed up at the Detroit vote counting center in the middle of the night, but numerous media outlets had been denying it for months.  Among other things, NPR also tried to claim the big batch of ballots for Biden came from drop boxes, but the boxes had already been cleared out every hour.

NPR also twisted the results of a study on meth addicts.  The study found a small improvement in their behavior for a few weeks when the government paid them to stay off meth.  NPR used this to claim such payments work long-term and to extol the virtues of a proposal to make such payments in California.  However, NPR exaggerated the importance of a single study finding a marginal short-term benefit, puffing it up into the claim this was the best course of action and other treatments don’t work.

Last August, CNN’s Chris Cuomo lied to viewers when he claimed he never talked to other members of the press about his brother’s sexual harassment scandal, his brother being the former Governor of New York before they were both dethroned.  However, documents show Chris Cuomo did call around to other news outlets trying to sniff out what damaging stories might be coming.  He also drafted entire statements he hoped would help his brother.

ABC7 in San Francisco declared the term ‘looters’ out of bounds and would not use it to describe the looting taking place in the city late last year.

These are just the latest outrages.  There’s more, but you get the point.  These are the media sources in which my relative has placed his trust – people who lie to viewers, run fake polls, ignore important stories, won’t call a spade a spade, and make stuff up.  They are deranged and violent, but my relative still trusts them, to this day.  Are you going to make the same mistake?  I hope not.  As for me, I’ll take “fascistic” and “reactionary” over unhinged dishonest propagandists any day.

Watch Eagle Headline News – 7:30am ET Weekdays   – The 6 Top Stories in One Minute