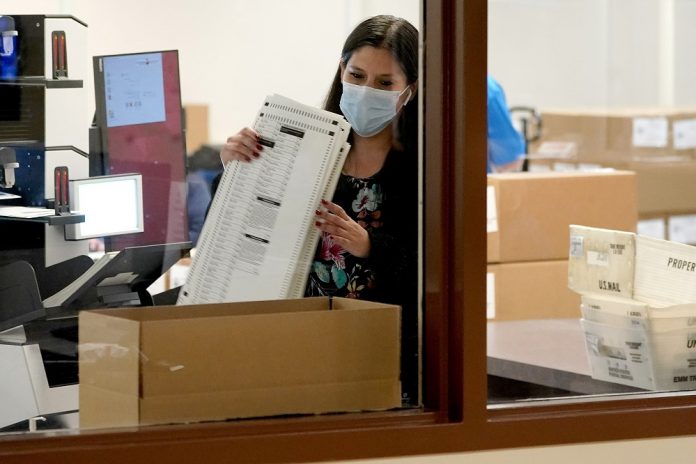 According to its final report, the signature verification pilot study was conducted by Shiva Ayyadurai’s Election Systems Integrity Institute, which was requested by the Arizona State Senate. In addition to being an engineer and entrepreneur, Ayyadurai holds four degrees from MIT and claims to be the inventor of email – a claim that his critics claim is exaggerated.

In the 2020 presidential election, Maricopa County received and counted 1,911,918 early voting mail ballots. The county reports that 25,000, or 1.3%, of those ballots, had signature mismatches that required rectification; however, only 587 (2%) of those mismatched signatures were confirmed.

As part of the Maricopa County election rules, a reviewer first compares the signature on the envelope with the voter’s signature on record, which takes roughly four to thirty seconds. The ballot is then cured if the signature doesn’t appear to match. This process can take three or more minutes and involves contacting the voter to determine whether the signature matches or not.

From the sample, it was concluded that more than 204,430 ballots should have been cured and 5,277 rejected.

“We want to be humble about this,” Ayyadurai said during a virtual demonstration of the study. “While the study is compelling, an expanded study is warranted to confirm the findings of this study.”

Meanwhile, a feisty Donald Trump demanded a congressional investigation into the alleged collusion between Big Tech and the Democrats on Saturday at CPAC. Speaking to an audience of passionate supporters in sometimes blunt terms, the former president criticized social media censorship of news damaging to Joe Biden during the 2020 campaign, as well as massive private donations to transform local election offices into Democrat voter turnout machines in carefully targeted swing states.

“A Republican Congress should launch a select committee … to get to the bottom of Big Tech’s 2020 interference,” suggested Trump. “Let’s find out who made the decision to censor the Joe and Hunter Biden corruption bombshell, which the pollsters said amounted to about 15 points, the largest illegal campaign contribution in American history.

“And let’s do a full forensic audit of the $417 million given by [Facebook cofounder] Mark Zuckerberg, who used to come to the White House and kiss my ass, that they spend to take over local election offices in key Democrat counties. And I believe you’re going to be hearing a lot of it.

“You know, if you’re a person that wants to make a [campaign] contribution, you’re allowed to give less than $6,000. Otherwise, they put you in jail. He gave $417 million. What the hell is going on? What are we doing? $6,000 and you go to jail, $417 million spread all over the place. It’s something that obviously is going to have to be looked at. It is so horrible what’s happening to our country.

“We need a full accounting of all of the illegitimate turnout efforts, illegal drop boxes, and ballot harvesting that’s taken place. You know, we had drop boxes 97% for Joe Biden. Because he campaigned so hard from his basement …

“We need fair elections. You need those borders, you need those elections. The world is already waiting to see the explosive information out of Georgia where True The Vote, incredible people, has uncovered a massive illegal ballot harvesting scheme with over 2,000 ballot stuffers or, as they call them, mules. They call them mules. These are ballot stuffers … Ballots in Georgia and other swing states were trafficked and sold on an unprecedented scale … It was just incredible what took place that we have it on tape, it’s all on tape, and it’s coming out over the next three weeks.”

According to some authorities, including some in Republican-run states, there was no widespread election-altering voter fraud in the November 2020 elections. Some states, however, have admitted to serious irregularities or unlawful changes to election rules in the 2020 election.

Several hundred thousand absentee voters skipped voter ID checks because they claimed they were “indefinitely confined” by the pandemic without showing any medical impairment, according to Wisconsin’s Supreme Court. The legislative audit bureau of Wisconsin found that many other rule changes were made without approval by the legislature.

There have been questions raised about more than 50,000 ballots cast in the November 2020 election in Arizona, while in Georgia, election officials have found so much mismanagement in the vote-counting that the state will manage future elections in Fulton County, which includes Atlanta.