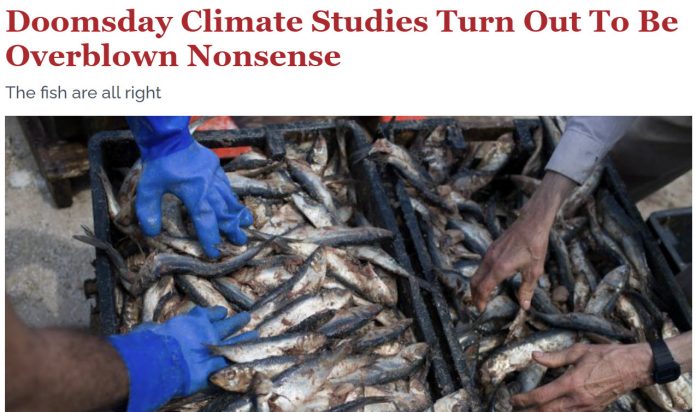 Acid rain – remember that one?  Alar – remember that one?  The earth is cooling – remember that one?   No reason you should.  They were all nonsense.  More recent green scares also turned to be nonsense, or less there than meets the eye – polar bear extinction, sea level rise, and disappearing coral reefs.  These scares keep happening because the climate change-industrial complex and other radical environmental Leftists think it’s perfectly fine to lie to you and scare you to death if it allows them to remake the world in their image and gets them to where they want to go.  They themselves will be the first to tell you they are liars – strategic liars – as I mentioned yesterday.  And you can add explicit admissions by Al Gore and Tim Wirth to the same effect, to the strategic lying I pointed out yesterday.

Now comes the latest adventure in greenpanicking – acid fish.  The greenies are warning acidification of the oceans will decimate fish populations because acidification makes fish less inclined to evade predators.  It’s all hogwash.  A review of 91 studies found the higher the quality of the study, the lower the effect acidification has on fish.  The most alarming results the greenies trumpet came from low-quality studies with small sample sizes that are completely unreliable. Overall, the review found, “ocean acidification has a negligible direct impact on fish behavior.”  This is exactly what I was telling you yesterday about hundreds of scientists criticizing the climate change crowd for lack of scientific integrity.  Here it is again.

Unscrupulous liars – these are you heroes.  The computer models they use to predict climate change are so bad they can’t even reproduce temperature changes in the 20th century.  So why would you believe anybody who claims their computer model can tell you what the temperature will be a hundred years from now?  You’re a fool if you do.

They also withhold important information from you.  They like to talk about how they’re saving the planet, but they never talk about what their policies would really do, as I mentioned yesterday.  They never talk about the bad stuff.   The regulations Biden wants would “keep 11 million more people in poverty come 2030 than otherwise would be.” And if “the Glasgow climate conference … leads to the adoption of much stronger climate measures, policy makers will raise that total to 80 million additional people in poverty by 2030.”  They WANT you to use less energy.  They WANT you to be poor, and they’ll ride any horse that will get them there.  Could it be any clearer?

Speaking of withholding information, New York is doing its best to cover up the true cost of its climate legislation which mandates “Net Zero” emissions by 2050.  The legislation requires public officials to make the total costs and benefits public, but they haven’t done it.  As the U.K. found out recently, the costs are so high, any benefits are completely overwhelmed and green policies are doing real damage, far more than any damage arising from supposed climate change.  But the greenies don’t care.

They go right on telling you to eat bugs and cuddle with your pets to stay warm in the freezing winter and there isn’t enough heat.  Too bad if the elevators stop working in your building and you’re elderly.  Too bad if your electric bill goes up 30 percent like in Europe and you can’t afford other necessities because of green policies.  When are you going to get it through your thick skull the greenies don’t care about people and might actually be trying to hurt them.  The greenies certainly don’t care about YOU.  They only care about their fake religion of climate change.  Like John Kerry just said: Russia started a war and Ukrainians are dying?  So what, as long as it doesn’t stop the fight against climate change.  Talk about a one-track mind.  What a heartless narrow-minded moron.

The wheels are falling off the phony climate change narrative, but the Biden administration is holding on for dear life.  It just held a roundtable on how to fight climate change deniers like me.  Participants discussed their opponents’ arguments for delaying climate action and dreamed up ways to counter them.  Pravda is gearing up to tell you how to think.  According to the delusional fools in the White House, climate denialism only exists because “special interests” have been “sowing doubts” and speaking heresy.

Some heroes you got there.   They lie, they cheat, they fear-monger, and they cuddle up with the Russians to stay fed.  Their financial patron thinks nothing of invading other countries, and THEY think nothing of tormenting and even killing the rest of us.  If you’re a climate change true believer, you’ve got some agonizing reappraisal to do.