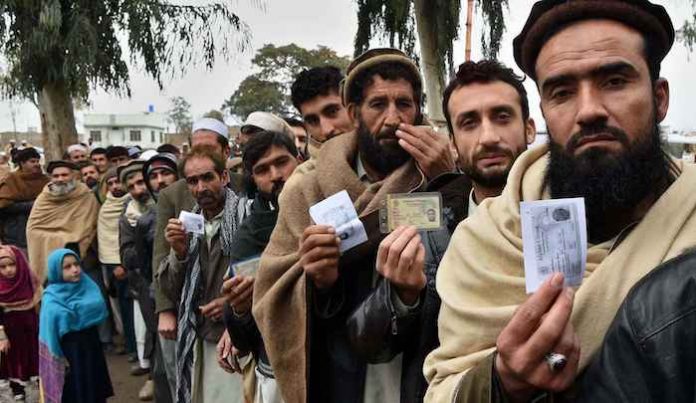 Biden’s evacuation brought tens of thousands of Afghans to America.

The majority of them were not interpreters, had no visas, and no basis for entering the country. Despite that, they were rapidly brought here with virtually no vetting, dropped off at military bases, and then put through the resettlement process across the United States.

There’s no one problem.

At last count around 36,000 Afghans or 40% of the “refugees” had no legal basis for being evacuated even after the Biden administration and its congressional allies, both Democrat and Republican, watered down standards for applying for SIV visas so much so that virtually any Afghan employed in any capacity by any contractors, charities, or even the media qualified.

The vast majority of Afghans in the evacuation were not visa recipients, but the evacuees got past Taliban checkpoints even while Americans and visa holders were being turned back.

Many of them have no paperwork and no legitimate basis for even claiming political asylum.

The same coalition of administration officials, congressional staffers, and refugee resettlement profiteers who perpetrated this mess have a shortcut in mind for legalizing all of them anyway.

A proposed Afghan Adjustment Act would grant the Afghan migrants, at least 36,000 of them, permanent legal residency and put them on a pathway to demanding citizenship.

Tens of thousands of Afghans have been turned loose on “humanitarian parole” for two years, which gives the refugee resettlement organizations handling their cases plenty of time to figure out some basis for applying for a more permanent asylum, but they don’t want to follow the law.

Despite the virtual lack of vetting, hundreds of the Afghan migrants are being flagged as security risks. 50 believed to be security risks were already released in this country and the majority of them are in the wind. Four have already been involved in sexual assault cases. Considering how much the Afghans have misbehaved in so little time, the refugee resettlement contractors are understandably worried that much more damaging information will come out after two years.

The new rush to lobby for an Afghan Adjustment Act, still in draft form, exploits the outrage and sentiment over the botched Afghanistan evacuation to rapidly legalize all of the Afghans here.

We were rushed into this disaster and we’re still being rushed into more disastrous decisions.

Biden told us that we had to urgently evacuate Afghanistan, but he was the one who chose to turn over Kabul to the Taliban, and to create the conditions that allowed the terrorists to quickly seize the country. Once the Afghans were evacuated, there should have been plenty of time to hold them at overseas bases in Qatar and elsewhere, then thoroughly screen and vet them.

Instead, the Biden administration pushed to cut refugee resettlement and vetting times from years to days. What exactly was the rush to evacuate the Afghans, not from Kabul, but from Qatar? Now, with two years to go, there’s a new rush to give the Afghans instant legal status.

What’s the rush? They’re no longer fleeing the Taliban. They’re safely in America. What’s the excuse for not properly screening and vetting them through the normal asylum process?

Bringing tens of thousands of Afghans to America and rapidly resettling them, even though they had no long term legal status, was meant to make the invasion irreversible. Now that the Afghans are scattered from Omaha to Philly to the Bay Area, the odds of deporting them after two years are slim, but the Afghan Adjustment Act would lock in their status, and make it very difficult to deport them even if they turn out to be terrorists, rapists, and other kinds of criminals.

It also speeds up the process of demographic change by which they will import family members, and alleged family members, to this country in order to transform cities, states, and the nation.

The House version of the Afghan Adjustment Act is being drafted by Rep. Earl Blumenauer, one of the most notorious shills for Islamists, and the Democrats are trying to enlist Republicans into foolishly backing the rushed effort to rapidly legalize a population of unvetted Afghan migrants.

Refugee resettlers like the Church World Service and HIAS, as well as umbrella groups like the Refugee Council, which also includes Islamic Relief USA, Amnesty International, the Lutheran Immigration and Refugee Service, OXFAM, and other players in the same racket, are pressuring congress to legalize all the Afghans now while asking questions later. Or never.

And the first question is who are the Afghan migrants and why can’t we wait to find that out?

The pressure campaign around the Afghan Adjustment Act is aimed at protecting the Afghan migrants from having to apply for asylum. The advocates for instant legalization claim that the backlog of asylum requests is too long, but that’s the doing of their own organizations which have done everything possible to Cloward-Piven the refugee system by pushing open borders.

If the refugee asylum process were reserved for people fleeing political and religious persecution, as they should be, instead of Latin Americans fleeing high crime rates, we wouldn’t be overwhelmed with a massive backlog of frivolous asylum requests by illegal border invaders.

And two years is plenty of time in which to process the current requests if that were the issue.

Instead the refugee resettlement lobby wants a free pass for 36,000 Afghans. And it wants to rush Americans into once again going along without asking any of the important questions..

Americans have been lied to about the Afghan evacuation at every turn. Politicians, the media, and the resettlers kept telling us that they were providing visas to interpreters. But the vast majority of Afghans need their own interpreters and most of them never worked with the military.

If they had, they would qualify for SIV visas.

40% of the Afghans, those tens of thousands, not only didn’t work for our military, but never worked with any American organization in any capacity or they would qualify for a visa.

After lying to us about saving “interpreters”, and lying about the Afghans being carefully “vetted”, they’re trying to pull off the biggest scam yet by retroactively legalizing their illegal evacuation under the umbrella of an Afghan Adjustment Act which will shut down any further scrutiny.

Why don’t they want the Afghans to apply for asylum? The answer is painfully obvious. Just as it was obvious why they dismantled the visa standards for Afghans every single step of the way.

The Biden administration never vetted the tens of thousands of Afghans it imported into America. It and its refugee resettlement allies want to make sure that they never are.

Discovering the real truth about the Afghanistan withdrawal will require close scrutiny of what happened in the White House, in the Pentagon, and in the State Department. The tens of thousands of Afghans who got on the planes, when Americans and visa holders could not, the Taliban checkpoints, and the suicide bombing at the airport are all part of a larger puzzle.