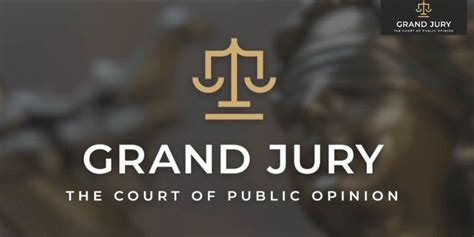 Day 1 – Opening Statements – Many more included in the link above and must be watched for truth about what the world has been experiencing for 2+ years.  Link also here: https://odysee.com/@GrandJury:f?view=content

We, a group of international lawyers and a judge, hereby are conducting criminal investigation modelled after the United States Grand Jury proceedings.

This Grand Jury Investigation serves as a model legal proceeding to present to a jury (consisting of the citizens of the world) all available evidence of COVID-19 Crimes Against Humanity to date against “leaders, organizers, instigators and accomplices” who aided, abetted or actively participated in the formulation and execution of a common plan for a pandemic.

Crimes to be investigated include all acts performed or omitted by a person in pursuance of a common design to commit Crimes Against Humanity, and all such criminal acts condemned in the various communities of jurors around the world.

This, in turn is founded on the firm belief that every person can easily distinguish between good and evil, and between right and wrong.

The allegation is that the world’s governments have come under the controlling influence of corrupt and criminal power structures.

They colluded to stage a pandemic that they had been planning for years. To this end they deliberately created mass panic through false statements of fact and a socially engineered psychological operation whose messages they conveyed through the corporate media.

The purpose of this mass panic was to persuade the population to agree to the so-called “vaccinations” which have in the meantime be proven to be neither effective, nor safe, but extremely dangerous, even lethal.

The economic, social, and health damage that these Crimes Against Humanity have caused to the world’s population can be measured in quadrillions of dollars.

The lawyers listed below, with the assistance of a number of highly respected scientists and experts from around the globe and under the auspices of a judge from Portugal,
will conduct this Grand Jury Investigation and thereby provide the jury (the citizens of the world) with a complete picture of these Crimes Against Humanity.

The ‘Peoples´ Court of Public Opinion´s investigation´s purpose is twofold: On the one hand it is to serve as a model proceeding and get indictments against some of the criminally and civilly responsible figure heads of these Crimes against Humanity.
And on the other hand it is – through showing a complete picture of what we are facing, including the geopolitical and historical backdrop – to create awareness about

the factual collapse of the current, hijacked system and its institutions, and, as a consequence the necessity for the people themselves retaking their sovereignty, and
the necessity to first stop this plandemic´s measures by refusing to comply, and
the necessity to jump-start their own new system of health care, education, economics and judiciary, so that democracy and the rule of law on the basis of our constitutions will be reestablished.