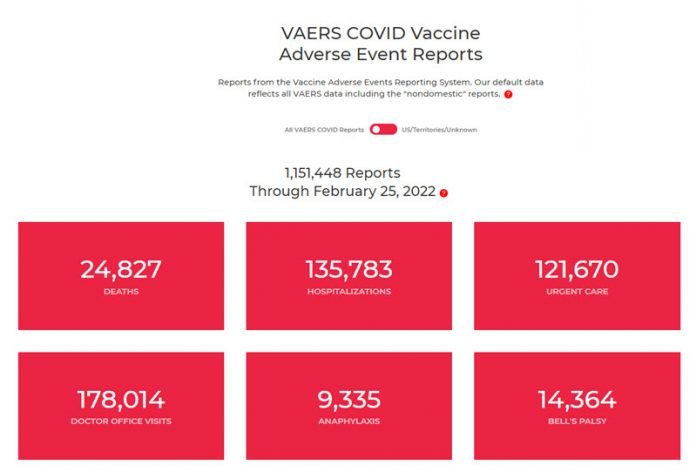 In 1976, U.S. regulators pulled the swine flu vaccine after it was linked to 25 deaths.  In stark contrast, U.S. regulators have not pulled the COVID vaccines despite nearly 25,000 deaths in the U.S. alone that could be linked to the vaccines, so far.  Nor have regulators made public any safety studies on the vaccines, with a couple of minor exceptions.  The public is entitled to know whether the government deliberately decided not to study the overall safety of COVID vaccines.  If such a decision was made, the public is entitled to know why.  The situation is potentially a thousand times worse than the swine flu vaccine fiasco in 1976, but the government has been virtually silent on vaccine injuries and overall safety today.

That’s why I filed a Freedom of Information Act request with the CDC in November.  The government said it needed extra time to consider my request, calling it ‘complex’ and claiming they needed help from the manufacturers to find the government’s own records.  When I asked them how long it would take, they said they would get around to it when they get around to it.

Given that the FDA wanted 75 years to release vaccine data in another case, I found that unacceptable and decided to file a request for expedited processing, as provided under the law.  It took me a month to put the request together because, as interpreted, the law requires petitioners to make their entire case up front.  If it goes to court, the court will not consider anything beyond what was previously filed.  The court will not take new evidence or even judicial notice of news stories.  So I put together 37 pages of legal points and authorities and more than a hundred news stories to document why there is a “compelling need” to make the information public at this time.  I filed my request for expedited processing yesterday and the CDC has 10 business days to respond.

I had steadily been clipping news stories on the subject.  When I viewed them as a batch for making my request, I realized the situation is worse than I thought.  There have been over 1.1 million adverse reactions from COVID vaccines reported to the U.S. government alone, so far.  Blood clots and heart problems are pretty common knowledge, but did you know the vaccines are potentially causing cancer, genetic damage, Parkinson’s, neurological disorders, strokes, brain diseases, spinal cord problems, immunosuppression, infertility and miscarriages, among other things?   Did you know a thousand different studies in medical journals now document the problems with COVID vaccines?

So I’m back to the question I’ve been posing all along:  Where are the government safety studies?   In 1976, the swine flu vaccine was pulled after it was linked to just 25 deaths.  Today, nearly 25,000 deaths are potentially linked to COVID vaccines, but they have not been pulled from the market, or even studied.  The situation with COVID vaccines is unprecedented.  Nothing like this has ever happened before.  It’s potentially a thousand times worse than 1976, but the government apparently has not done the safety studies indicated by the adverse event reports coming in by the truckloads.  If the government has studied the overall safety of the COVID vaccines, the results have not been made public.   The government won’t even talk about it.  I’ve said all along, anyone who keeps claiming the vaccines are safe but won’t talk about adverse reactions is lying to you.

I told the government yesterday I am prepared to go to court if necessary to get the answers now.  I also told them the longer they drag this out, the more opportunity they hand their critics to impugn their motives especially since, as we now know, the government has been paying media outlets to tell the public the vaccines are safe.

The vaccines are safe?  Prove it!  Give us the safety studies now or explain why they haven’t been done in a situation potentially a thousand times worse than when the swine flu vaccine was taken off the market in 1976.