In remarks to the media, Erdogan said he believed that “this historic visit will be a turning point in relations between Turkey and Israel. Strengthening relations with the State of Israel has great value for our country.”

He noted that the meeting with Herzog included a discussion about events in Ukraine and in the Eastern Mediterranean and said he believed “the coming period will bring new opportunities for both regional and bilateral cooperation.”

The Turkish leader expressed hope that “this important visit, taking place after so long, will provide an opening for future joint opportunities.”

Speaking after Erdogan, Herzog thanked the Turkish president for the warm welcome and said in Turkish: “My wife and I are very happy to be in Turkey as your guests.”

Addressing the meeting with Erdogan, Herzog said the leaders held “productive” talks and addressed many issues.

“Our peoples’ relationship is an ancient one, with strong historical, religious, and cultural roots. The long line of magnificent Jewish leaders, rabbis, poets, sages, merchants, and entrepreneurs represents only part of the Jewish People’s history here in this land,” he said.

“I believe that the relationship between our countries will be judged by deeds reflecting a spirit of mutual respect and will enable us to better confront the regional and global challenges that are common to us all,” he added.

Herzog’s trip marks the highest-level visit by an Israeli official since former prime minister Ehud Olmert made the trip in 2008, and is seen as an important step toward rekindling the two countries’ long-floundering relationship.

The president arrived on a plane emblazoned with the words “peace,” “future” and “partnership” in Hebrew, Turkish and English.

Arriving at the presidential complex in Ankara, Herzog was greeted by Erdogan and an honor guard, as a band played the Israeli anthem for the first time since 2008.

Herzog and his wife Michal were expected to be hosted by Erdoghan for a state dinner.

Despite high hopes for a possible diplomatic breakthrough during the meetings, the sides are not slated to discuss or announce the installment of full ambassadors in each others’ capitals, a Foreign Ministry source told The Times of Israel.

Herzog’s visit to the Turkish capital and to Istanbul was planned weeks before Russia invaded Ukraine, but the conflict could feature at the talks, with both Israel and Turkey playing mediation roles in recent days.

But bilateral issues are likely to dominate following more than a decade of diplomatic rupture between the Jewish state and majority Muslim Turkey.

Prior to his meeting with Erdogan, Herzog visited the mausoleum of Mustafa Kemal Ataturk, the founding father of modern Turkey, and laid a wreath.

Signing a guestbook at the memorial, the Israeli president wished for a “safer and more stable world” for Israel and Turkey.

“It is a distinct privilege to be visiting this historic site, immortalizing the great visionary Mustafa Kemal Ataturk,” he wrote in English.

“May we follow in the wisdom of this great leader’s legacy of progress and peace, boldly choosing the path of collaboration and welcoming the many fruits to be reaped from the promise of a safer and more stable world for our nations, our faiths, our region and the world,” he added.

The president and the first lady also toured the Anıtkabir Ataturk Museum. 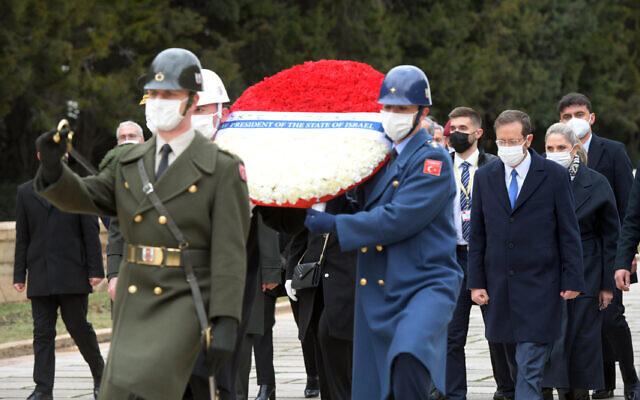 Before departing on his trip, Herzog said rekindling relations with Turkey wouldn’t be easy but it would benefit the Middle East as a whole.

“Hopefully following my visit, a process of in-depth and serious dialogue with Turkey will begin at various levels, and we will eventually see progress with positive relations and results,” he said, noting that his trip was being made in full coordination with Prime Minister Naftali Bennett and Foreign Minister Yair Lapid. 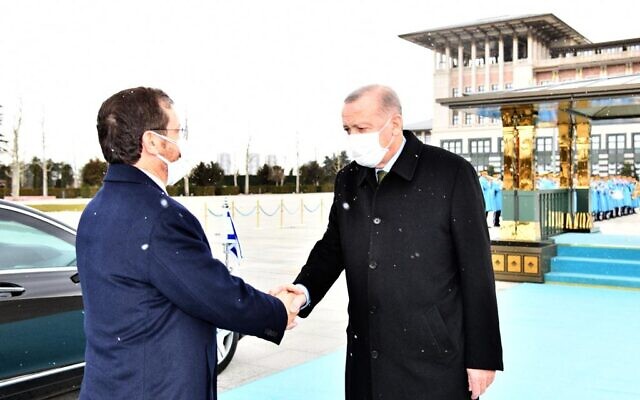 Turkey and Israel once were close allies, but the relationship frayed under Erdogan, who is an outspoken critic of Israel’s policies toward the Palestinians. Israel also has been angered by Erdogan’s embrace of Hamas, the terror group that controls the Gaza Strip and is committed to Israel’s destruction.

The countries withdrew their respective ambassadors in 2010 after Israeli forces stormed a Gaza-bound flotilla carrying humanitarian aid for Palestinians that broke an Israeli blockade. The incident resulted in the deaths of 10 Turkish activists.

Relations improved and then broke down again in 2018 when Turkey, angered by the US moving its embassy in Israel to Jerusalem, once more recalled its ambassador, prompting Israel to respond in kind. The two countries have not restored their ambassadors.

The steps toward a rapprochement with Israel come as Turkey, beset by economic troubles, has been trying to end its international isolation by normalizing ties with several countries in the Mideast region, including Egypt, the United Arab Emirates and Saudi Arabia.