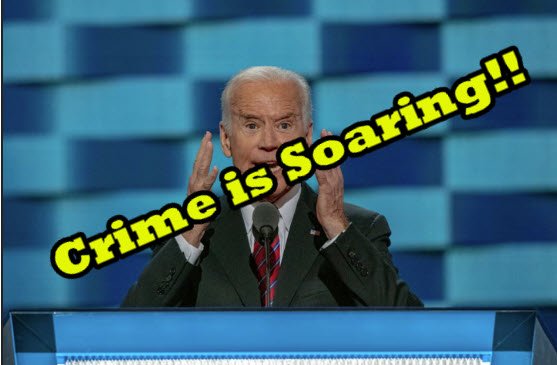 If you needed more evidence Woke criminal justice reform is the wrong way to go, it came with the arrest of the second suspect in the Sacramento gang shooting this month that left six dead and 12 wounded.  The second suspect had been released early from a ten-year prison sentence under a new California law that reduced punishment for felonies.  This time, you can’t blame the politicians.  California voters approved this change in the law.  It’s pure insanity.  Punching your girlfriend, dragging her home by the hair, and whipping her with a belt are all now considered ‘nonviolent offenses’ qualifying for early release.

You can’t blame the politicians in Oregon, either.  One year after state residents voted to decriminalize drug possession, Oregon now ranks second in the nation in substance abuse disorders and worst in the country for people needing but not receiving drug treatment.  Overdose deaths are increasing.  Way to go Oregon, problem solved!

Crime is up 44 percent in New York City this year, where politicians are trying to back-pedal from Woke bail reform.  It’s also up 36 percent in Chicago, where Mayor Lori Lightfoot defunded the police and refused to call out the National Guard to put down the riots.

Not only has Woke criminal justice reform made crime rates go up, it’s gotten police officers killed.  A hundred and one police officers have been shot in the line of duty so far this year, including 17 fatalities.  The shootings are up 43 percent from last year.

After the rise of smash-and-grab robberies in recent months – including in Chicago and Beverly Hills –  the U.S. Chamber of Commerce is begging for a stronger response to shoplifting and organized retail crime.  You know, shoplifting, which the Woke crowd says it totally justified because it redistributes income?  Shop owners should just file their insurance claims and get over it.

Unfortunately, this kind of thinking just got institutionalized a bit with the ascent of Judge Ketanji Brown Jackson to the Supreme Court.  She is a proponent of Critical Race Theory (CRT) which holds that society is systemically racist and all non-white people are oppressed.  She claimed during her confirmation hearings CRT does not come up in her work, but she was dissembling.  She has advocated in the past for making CRT a factor in sentencing.  In plain English, she believes sentencing cannot be fair unless the race of the defendant is considered and non-whites get breaks that whites do not.  Isn’t there an equal protection clause against that kind of thing?  It doesn’t matter.  Blind Lady Justice goes out the window when Woke Lady Justice Jackson goes to the Supreme Court.

Democrats put her there.  Democrats also defunded the police, reduced penalties for felonies, caused more drug use through decriminalization, and let more repeat offenders back out on the street with Woke bail reform.  But now they have the nerve to pretend they are tough on crime.  Democrats in New York, New Jersey, and New Mexico are pushing legislation that would roll back bail reform and bring back tougher sentences.  The motivation could be confession of error – they knew these were bad mistakes, or it could be the fact they have to face the voters in November.  In any event, it’s too little, too late.  They will get hammered by the voters in the elections later this year, as they so richly deserve for caving into the Woke Progressive wing of their party.  The reckoning for wrecking America is coming on this and many other issues.