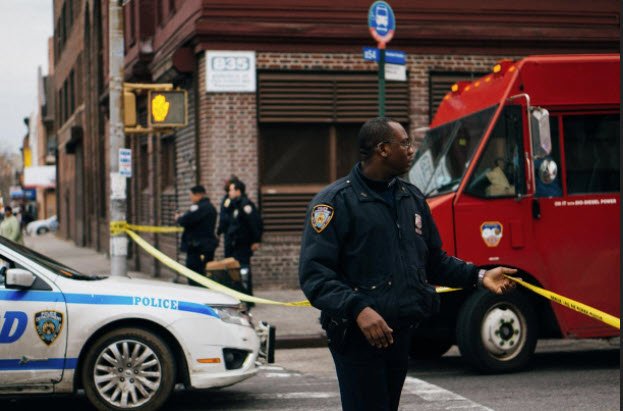 As New Yorkers confront the latest in what seems like an unceasing stream of increasingly gruesome and brutal crimes (unfolding during the opening months of former NYPD Captain and newly inaugurated Mayor Eric Adams, who has promised to combat crime), law enforcement is facing up to the realization that the suspect (as is tragically common in mass shootings and other incidents of ‘terrorism’ extreme violence) had previously set off flags that probably should have warranted a closer look.

It started yesterday with Newsweek reporting that the suspect (still at large) in the shooting – Frank James – had been investigated and cleared by the FBI in 2019. Soon after that report emerged, thousands of people scouring James’ social-media presence made a truly shocking (if unsurprising) discovery: the suspect who shot at least 10 people in a terrifying and meticulously planned mass shooting (police found explosive devices that didn’t detonate) has been publishing bizarre, hate-filled rants on YouTube praising other mass shooters terrorists and calling on people to kill “whitey”.

Amazingly, YouTube hasn’t yet taken down the page, which – as far as we can tell – still includes all of the hateful videos that media outlets have reported on extensively overnight.

In one video, James verbally attacked NYC Mayor Adams, saying he had been through the city’s mental health system due to a “mental health” issue that had gotten him “locked up”. In the system, he said, he experienced a kind of violence that would make someone “go and get a gun and shoot motherfuckers.”

In his videos, he appears to express support for an extreme “black nationalist” ideology. At certain points, he even expresses a hatred or dislike for black people, referring to them as racial slurs which we won’t repeat here (although you can find some examples over at the Daily Beast).

At one point, James calls upon “black Jesus” to “kill all the whiteys”.

Frank James, the person of interest in the #Brooklyn mass shooting, posted a photograph of the Dallas #BLM shooter who killed 5 cops. He also posted a prayer asking for whites to die. One of his videos is titled, "We once were kings." pic.twitter.com/s97iXfiyBH

Frank James, the person of interest in the #Brooklyn subway mass shooting, made a number of pro-communist and pro-Fidel Castro posts in the past. His more recent posts and videos have pivoted obsessively to black nationalist interests. pic.twitter.com/Nvh1aoINR8

Describing himself as a “prophet of doom”, James at one point described 9/11 as “the most beautiful day, probably in the history of this fucking world.”

His posts included references to current events, from the Will Smith-Chris Rock “slap” to Ketanji Brown Jackson being elevated to SCOTUS: “I had no idea, with that African name, that she would be married to a white man. One of my subscribers brought that to my attention. Yeah. Our black sister Supreme Court Justice, power to the people, is married to a f**king white man. (Crying) I don’t believe this sh*t. Oh God! Wait a minute. This motherf**ker right there, there he is. There he is! White man! Black sister, Ketanji, married to a white man.”

Frank James, the person of interest in the #Brooklyn subway mass shooting, has many videos on YouTube discussing his militant black nationalist views. He recently expressed disappointment that Justice Ketanji Jackson is married to a white man. https://t.co/edHUVtTvwI pic.twitter.com/hL0ysMw5VM

Apparently, James posted posts inciting violence on Facebook for years, without them being taken down.

"It's time for action"

For years, Frank James, the person of interest in the #Brooklyn mass shooting, has made references to shooting and killing people on his Facebook posts. pic.twitter.com/dCzK4JddUp

NYPD cited James as a “person of interest” in the attack during a Tuesday press conference. When reached by the Daily Beast, one of his sisters, Catherine James, said she hadn’t spoken to her brother in a few years, and that he “kept to himself.”

The NYPD said during last night’s press conference that, due to James’ comments about the mayor, they will be tightening his security.

Interestingly, while James frequently spouted anti-white hatred, the MSM has already set to work trying to frame the shooting as an attack on Asians and the Hispanic community, because of the location of the attack (h/t to Grabien for the quote).

“Mr. Mayor, I think that one of the things that went through a lot of people’s minds, who know New York City well enough to understand a little bit about the neighborhood in which this happened, particularly because of hate crimes, particularly because of anti-Asian hate crimes, this neighborhood where this happened, Sunset Park is a heavily immigrant neighborhood, there’s large Asian population among lots of other immigrant populations in that neighborhood. As you know, Brooklyn is perhaps the most ethnically and nationally and racially diverse place in the entire world. Is there any indication, or can you tell us anything about worries that this might have been ethnically motivated, might have been a targeted hate crime or sort of hate-motivated attack? I think people surmise that that might be a possibility given the location of this, but we don’t have anything to go on.”

We’re sensing a pattern here, as this isn’t the first time the MSM has tried to highlight black-on-Asian crime.

Forget about all of the new (predominantly white) gentrifiers who have been moving to Brooklyn in droves in recent years.