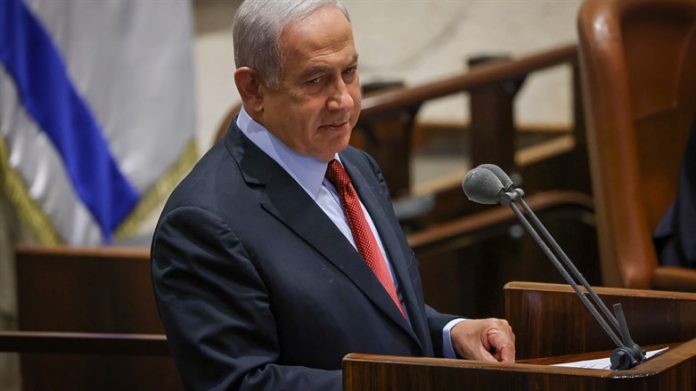 Opposition Leader and former Prime Minister Benjamin Netanyahu castigated the Bennett government Wednesday, after several coalition members blamed the IDF for the death of an Al Jazeera journalist during a firefight with terrorists in Jenin.

Speaking in the Knesset Wednesday afternoon, Netanyahu gave his “full backing” for the Israeli soldiers involved in the operation in Jenin early Wednesday morning.

“I want to give my full backing for the IDF soldiers and their officers, both in their fight against terrorism, and against the dishonest Palestinian propaganda campaign.”

“The libelous lies against our soldiers, the defamation from within the coalition government, proves once again that those who are dependent on terror supporters cannot fight against terrorism. A government dependent on the [Islamic] Shura council of the Muslim Brotherhood cannot defend our citizens and protect our soldiers.”

Abu Aqleh, an American citizen who worked as a correspondent for the Qatar-based Al Jazeera network, died after suffering a gunshot wound to the head Wednesday morning, after Arab terrorists in northern Samaria opened fire on IDF soldiers, sparking a gun battle in the city of Jenin.

A second Al Jazeera reporter, Ali Samoudi, was shot in the back and has been hospitalized in stable condition.

While the Palestinian Authority and Al Jazeera claimed the reporters were hit by Israeli gunfire, the IDF issued a statement Wednesday suggesting that the two may have been struck by shots fired by terrorists.

“IDF, Israel Security Agency, and Border Police forces operated recently in the Jenin refugee camp near the village of Burqin, and in a number of other locations across Judea and Samaria, in order to arrest wanted terror suspects,” the IDF said.

“As part of the operations in the Jenin refugee camp, suspects opened massive gunfire at the [Israeli] force, and threw explosive devices. The [Israeli] force responded with gunfire. Hits were confirmed. No Israeli soldiers were wounded.”

“The possibility that journalists may have been struck, possibly by Palestinian terrorist gunfire, is being investigated.”

Israel has pointed to video footage taken by terrorists at the scene apparently celebrating a person being hit by their gunfire, which they mistook for an Israeli soldier.