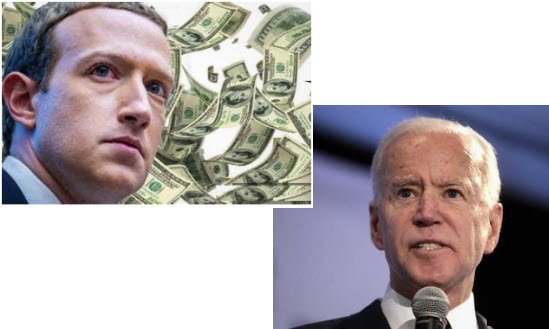 19th-century German Chancellor Otto von Bismarck was very explicit about why he created the modern welfare state – to buy votes.  Joe Biden is channeling Bismarck and attempting to do the same, as we can see from an executive order Biden issued in March.

The order directs government benefits agencies to submit plans to promote voter registration and turnout to help Democrats.  If the Biden administration didn’t believe this would overwhelmingly benefit Democrats, they wouldn’t be doing it, would they?  This is the new Zuckerbucks – a thinly disguised Get Out the Vote effort for Democrats – except it will be done with government agencies and money instead of private funds.  Call them ‘Bidenbucks’.

The order lines up with the recommendations of the far-Left activist group Demos.  Two people from Demos are now in the White House.

The Biden administration won’t reveal the details of the agencies’ voter registration plans.  What’s that about?  What are they hiding?  What don’t they want people to know about what they’re up to?  Activist groups are using the Freedom of Information Act to attempt to find out.

This is what we know so far:

The order instructs agencies to use all means at their disposal to “engage with the public … about how to register to vote, how to request a vote-by-mail ballot, and how to cast a ballot in upcoming elections….”  HUD will conduct voter registration drives at public housing projects.  HHS will launch a new voting access hub.  The Agriculture Department will be looking for new voters in the food stamp program.  Jailers will fish for new votes in federal prisons.  The order pushes vote by mail which the bipartisan Carter-Baker Commission noted 17 years ago is notoriously insecure.  The order allows agencies to enlist the aid of outside third-party organizations, which you can take to mean Democrat activist groups working to boost Democrat turnout in key areas, just like what happened with Zuckerbucks in the 2020 election.  Zuckerbucks, overwhelmingly, went to Democrat strongholds.  In addition, the order pushes agencies to get their own employees out to vote – reliably Democrat – and to volunteer to work on elections – again, to help Democrats.

On top of all this, Joe Biden’s budget proposal is asking for 15 billion more Bidenbucks to assist local election officials and goose the U.S. Postal Service to better accommodate voting-by-mail.  This is Zuckerbucks all over again, except with government grants and 30 times as much money.

So imagine if every person who receives food stamps, housing, Medicaid, and other government benefits registers to vote.  Everyone has a right to vote, that’s not the issue.  The federal government should not be putting its thumb on the scale in favor of one political party at the expense of all others.  More importantly, as has been observed since ancient times, democracy ends when people discover they can vote themselves the Treasury – more votes leading to more government benefits to buy more votes in an endless cycle until the current system is destroyed.  Joe Biden, and Bismarck before him, may not have realized this before issuing the executive order and ginning up the welfare state, but it’s that old saying, ‘It’s OK to be piggy, but hogs go to slaughter.’

The Sick Puppies of the Authoritarian Left