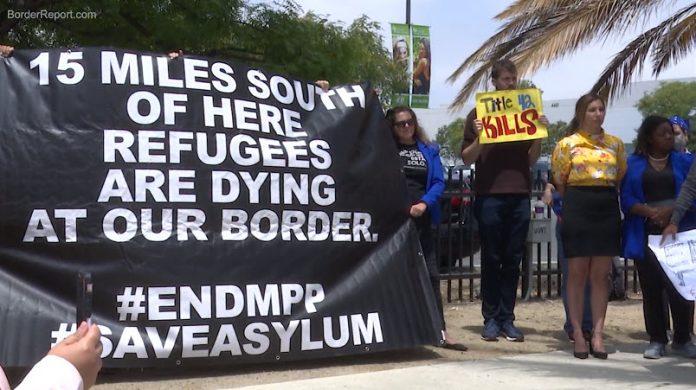 TIJUANA (Border Report) — A large group of Haitian migrants have decided to leave the streets of Tijuana and live together in a camp southeast of this city just south of the border from San Diego.

With the help of several charities and city officials, they’ve created a small city that has electricity, bathrooms and water. A Catholic nun also provides support and organizes meal deliveries and living arrangements.

The migrants have decided to join forces and live here rather than face what one of the residents says is discrimination, racism and crime in other parts of the city.

Some have lived here for a year since the camp formed and continue to patiently wait for their asylum cases to be processed.

As of this week, an estimated 300 residents were living at this camp, including a 10-year-old named Vila.

“My mother is suffering and I want to go to school in the United States,” Vila said in Spanish.

The young man has been staying at the camp with his mother and sister since arriving in Tijuana three months ago.

Aside from speaking Spanish, he is fluent in French and Portuguese.

His natural ability with languages has landed him a job as the unofficial translator at the camp.

Vila says life at the camp can be a struggle.

“It’s dusty, people get sick every day,” he said.

Like other children at the camp, Vila rides his bicycle and plays soccer during the day.

There’s not much in terms of a formal education aside from volunteers who come by to teach the kids a few days a week.

Some residents told Border Report that although they would like to be somewhere else, the camp is providing a relatively safe haven with strict rules and limited access to outsiders.

“Only those who are here can come in here,” said Chester. “We want to cross the border, it’s a sacrifice being here waiting to see if we can cross and get some freedom.”

A woman named Caline said it took her a year to get to Tijuana after leaving Chile, where she had lived for several years.

She says the camp provides a home for her and her husband.

“I want to get to Canada or at least Miami, anywhere north of the border,” she said. “We get help here, people bring food, but we can’t go back to Haiti, there are too many problems there with safety and with the economy.”