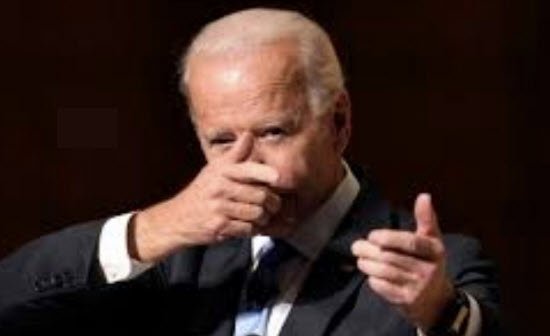 Yesterday, Joe Biden stupidly said a 9mm bullet is a high-caliber weapon that “blows the lungs out of the body.”  He’s an ignorant fool.  9mm rounds are typically used in handguns, not high-powered rifles.   He called for more gun control after Uvalde, but Democrats always do after a tragedy, because their motto is ‘never let a good crisis go to waste’.

Biden and his fellow Democrats would rather be authoritarian and talk about how the Second Amendment is “not absolute” than do something that might actually solve the problem.  They’d rather take guns away from law-abiding citizens and pass more gun control laws that haven’t worked in places like Chicago.  Red flag laws didn’t stop the grocery store shootings in Boulder or Buffalo.  Gun control is a complete failure, but Democrats keep pushing it at every turn.  You have to ask yourself why, when they can’t point to any success.  I would wager it has something to do with where the Democrats’ bread is buttered.  When’s the last time you heard of a billionaire like Michael Bloomberg giving away millions of dollars to promote armed guards in schools?  It doesn’t happen.  But Bloomberg and others like him give away millions to Democrats and left-wing activist groups to push gun control.  So Democrats get to indulge their authoritarian fantasies and get paid for doing it.  Life is good, if you’re in the gun control racket.

Back in the real world, a whole menu of common-sense solutions have been put forth and ignored in recent days on the subject of school shootings, so let’s take a look at some of them:

A father who lost his daughter in the Parkland shooting recommends a single point of entry that is locked down, armed guards, and teacher training.  It’s not likely anyone dressed in black carrying a rifle would be allowed in.  That would go a long way toward solving the problem, wouldn’t it?  That’s just the beginning of what’s possible.

Comb social media and develop algorithms to identify troubled students in advance to get them the help they need – profiling.  Recruit volunteer armed guards from retired military and law enforcement personnel.  Arm the teachers like they do in Israel and conduct active shooter drills until they become as routine as fire drills.  When’s the last time you heard of a school shooting in Israel – maybe 1956 and 2002?  Missouri allows teachers and school staff to be armed, and two school districts in St. Louis are moving ahead with teacher firearms training and annual retraining.

Israel uses a multi-layered approach:  profiling, armed guards, outside patrols, cameras, metal detectors, and a single point of entry.  Visitors must have a reason for being at the school and must sign the visitor log.

Take immunity away from social workers and counselors, and hold them liable for letting disturbed people slip through the cracks.  They should be specifically trained to profile students most likely to erupt. Evacuation and safety plans should be drawn up locally and reviewed on a regular basis.  This is what security professionals advise and have seen make a difference in emergency situations.

The Democrats won’t even consider ideas from the Right side of the ledger.  They’re too busy lining their own pockets with big bucks from the gun control lobby.  They have a financial conflict of interest on this issue and their demands for gun control should just be ignored.  If they won’t let the adults in the room solve the problem, then, the next time there’s a story about murdered school kids being laid to rest in tiny coffins, blame the Democrats.