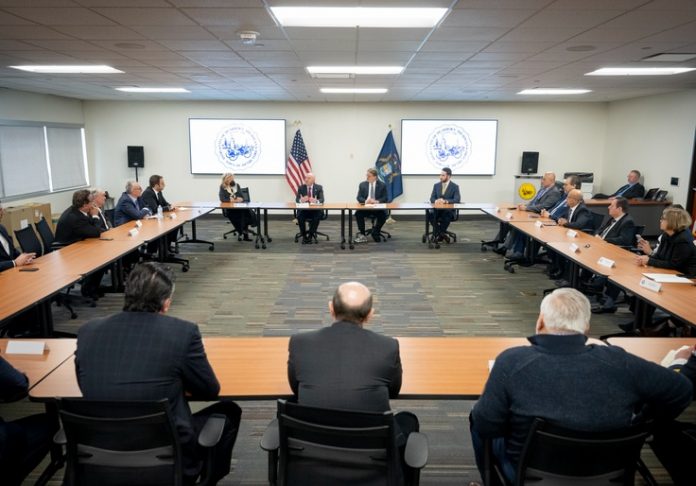 Homeland Security chief Alejandro Mayorkas created a Muslim community outreach position after meeting with an Arab-American activist who has cheered violence against Israel and praised the terrorist groups Hezbollah and Hamas.

Mayorkas met on March 18 with Arab American News publisher Osama Siblani, who has called Hamas and Hezbollah “freedom fighters,” and other activists in Dearborn, Mich., over their concerns with racial profiling by the Department of Homeland Security. Siblani, who urged Arabs last month to fight Israel with “stones” and “guns,” has lobbied DHS for years to appoint a liaison between the agency and Michigan’s robust Arab community. He praised Mayorkas after he announced the position on March 30.

“We were told to keep complaining,” Siblani told his newspaper. “Mayorkas told us this time ‘we will do something about it’ and he did.”

The meeting emerges as Mayorkas faces scrutiny for a series of policy blunders. Republicans have called for Mayorkas’s impeachment over his handling of a historic surge of illegal immigrants at the southern border. Republicans have also blasted him for forming a Disinformation Governance Board led by a Democratic activist who pushed disinformation about Hunter Biden’s infamous laptop.

The Department of Homeland Security did not respond to requests for comment about Mayokas’s meeting with Siblani and the other Arab-American leaders. Siblani’s inflammatory remarks were well documented before his sessions with Mayorkas.

The Anti-Defamation League has noted Siblani’s praise for Hamas and Hezbollah as “freedom fighters.” He cheered when the the Iran-backed Hezbollah “delivered on its threat” to bomb Israel in September 2019. He reportedly praised Hezbollah’s leader, Hassan Nasrallah, as the most “honorable man in the world.”

Siblani has referred to Israel as “occupied Palestine” and claimed the “pro-Israeli lobby” owns Washington, D.C. Last year, he urged a boycott of a restaurant whose owner posted “Long Live Israel” on Facebook. His anti-Israel remarks last month were at a rally alongside Rep. Rashida Tlaib (D., Mich.), the Washington Free Beacon reported. Siblani praised the fedayeen, or Islamic militants, fighting against Israel.

Siblani’s anti-Israel, pro-terrorist views have not curtailed his access to the Biden administration and Democratic lawmakers. The Biden White House invited Siblani to take part in a virtual meeting last year to discuss Middle East tensions. Siblani later bragged at a rally in Dearborn that he refused during the White House event “to apologize for Hamas firing rockets at Israel.”

Siblani has an especially close relationship with Sen. Gary Peters (D., Mich.), the chairman of the Senate Homeland Security and Governmental Affairs Committee.

Peters organized the community meeting with Mayorkas in March, and another event for Siblani and federal officials in Washington, D.C., in 2019. Peters, who leads the Senate Democrats’ campaign arm, spoke at the Arab American News offices on Sept. 18, 2020, at an event for the Arab American Political Action Committee. The participants quizzed Peters over his views on the Middle East and issues like terror watchlists before ultimately endorsing him for reelection. Siblani gave $250 to Peters’s campaign on Oct. 31, 2020. The Arab American Political Action Committee, which Siblani founded, gave $2,000 to Peters on Oct. 4, 2020.

On Nov. 18, 2020, Peters called on the Government Accountability Office to investigate whether the Transportation Security Administration had engaged in racial discrimination at airports and checkpoints.