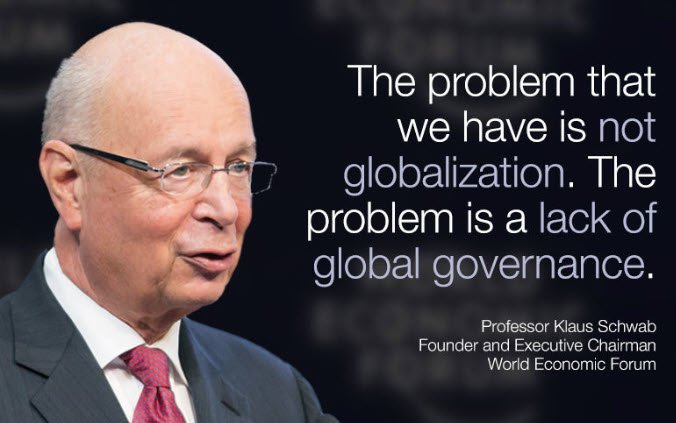 I never paid too much attention to the so-called globalists because, for a long time, the only evidence they were up to no good was some statements from 50 years ago about wanting world government.  But they recently met at Davos and said enough to convince me that, at the very least, they are part of the authoritarian Left, which I have often said is the central challenge of our time.

The first thing to note is that these people have a very high opinion of themselves.  Klaus Schwab opened the meeting by saying “the future is not just happening; the future is built by us, by a powerful community, as you here in this room.”  They may have more money than God, but they commit the sin of pride in deluding themselves their money means they have special knowledge and, moreover, entitles them to boss everybody else around.

Communist China’s state-controlled Alibaba followed Schwab’s pronouncement with news Alibaba will introduce more surveillance technology to ensure the little people comply with environmental mandates.  I say ‘state-controlled’ because there are no truly private companies in Communist China.  They all wear a ‘red hat’ and do the authoritarian state’s bidding.   Alibaba’s carbon footprint tracker will measure and report individual travel and food consumption.  It will report whether people use the most efficient route and the most efficient means of transportation.  People will be scored on all this so they will be prodded to avoid doing the “wrong thing”, whatever the authorities deem that to be.  Alibaba is doing this to boost its own Environmental, Social, and Governance (ESG) score.  So, in the future, you will eat your tofu hot dog while getting to your destination on a bicycle, and be happy.  Or else.

Members of the Davos crowd from Germany and Norway pronounced that global energy is in a crisis.  A great “transition” is upon us that will produce energy shortages and hardships for humanity.  Never mind that the world has plenty of fossil fuel.  Nations must lose their sovereignty and should not even try to shelter their citizens from the changes that are coming.   It all must be sacrificed to the “global agenda”.   You’re just supposed to suck it up and eat bugs.  But the “pain” will be “worth it”, as you’ll see when we reach the glorious green future.

I wonder what these people’s investment portfolios look like.  If they’re anything like Tom Steyer’s, they’re full of green energy investments that stand to profit from all this green happy talk and governments transitioning away from fossil fuel, even though they know energy shortages and widespread poverty will be the result.   The great green and wildly erroneous soothsayer Al Gore is playing the same cynical game.  It’s time for some financial transparency from these great green gurus who would be our masters.

In their version of the future, you won’t be free to object to what they’re saying or doing to you, or even ask questions about it.  An Australian government official at Davos said the world needs to rethink individual rights, including the right to free speech.  Free speech must be ‘recalibrated’, you see, to make the world safe from online violence.  Her version of free speech is hostile to conservative media, and willing to sacrifice women’s rights to the transgender political movement.  Several American observers reacted to this proposed recalibration of free speech by saying ‘no thanks’.

There’s more – like promoting digital currency (the better to control you with) and pushing pills with tracking devices that report on you.  But you can see how the pattern repeats:  We face horrible planet-wrecking problems; the sky is falling.  Only these enlightened beings with special knowledge can save us; only the globalists can hold up the sky.  The economic deprivation and curbs on our freedoms their solutions will cause are all for our own good.  And, oh, by the way, these solutions all just happen to produce wealth and power for a tiny elite while making life on earth a living hell for the rest of us.

And they want us to take them seriously?   You can put lipstick on the authoritarian Left and send it to Davos, but it’s still a pig.  These people are self-important, messianic, utopian, and delusional.  But they’re out of the closet and on the march.  Their insane ideas and pipedreams of world government should be resisted by freedom-loving peoples everywhere.