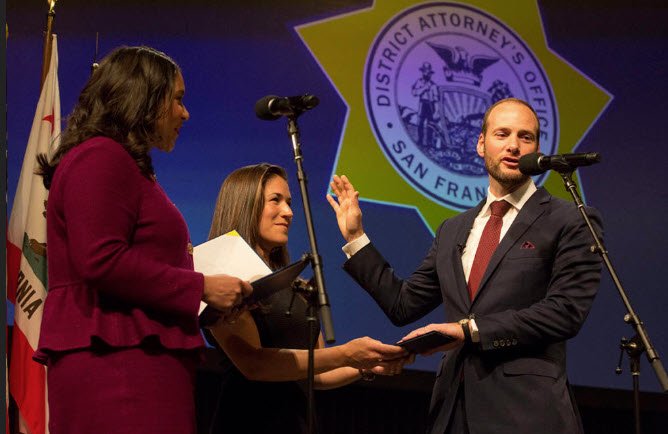 The second effort to recall Progressive San Francisco District Attorney Chesa Boudin goes to the voters next Tuesday.  Boudin, like other Soros DAs, champions eliminating cash bail, ending mass incarceration, bringing charges against police officers, and refusing to prosecute entire categories of crimes.  Critics say these policies have led to rising crime rates wherever they have been instituted.

The Soros DAs might believe in the righteousness of their cause, but they are completely unjustified in taking it upon themselves to remove criminal statutes from the books.  That’s the state legislature’s job, not the prosecutor’s.  Boudin and other Soros DAs have promised to refuse to enforce abortion laws if Roe v. Wade is overturned.  A Soros-backed prosecutor in Virginia refused to charge anybody taking part in the continuing illegal abortion protests outside Supreme Court Justices’ homes.

That’s not the only way the Progressive prosecutors’ moral compass is skewed.  A whistleblower said Boudin withheld evidence in a case against a police officer who was accused of using excessive force.  The whistleblower said she felt she would be fired from her investigator’s job unless she kept quiet about a witness who saw the offender beating a woman before the officer used his baton.  The San Francisco Police Department corroborated the whistleblower’s story and found Boudin was making a practice of concealing evidence and, as a result, will no longer cooperate with Boudin in officer-involved cases.

Apparently, the ends justify the means with these Progressive prosecutors.  Boudin wants to go after police officers, and is willing to hide evidence to do it.  Kin Gardner, the Soros-backed prosecutor who went after former Governor Eric Greitens was found by a disciplinary panel to have hidden evidence and failed to correct false court filings in her case against Greitens, which she ultimately dropped. Grand jurors, who indicted an FBI agent who took part in her political witch hunt, took the extraordinary step of writing a letter to a judge demanding more severe punishment for the prosecutor whose behavior they found “disturbing and unethical”.   In another matter, Gardner, true to Progressive prosecutor form, refused to charge a suspect who was accused of attempting to carjack a police SUV while two police officers were inside.

Also true to form, Boudin opposed San Francisco’s Mayor when she declared a state of emergency to crack down on crime after a string of mass looting events in the city.  The Mayor had been one of the first to climb on board the ‘defund the police’ train, but later confessed error and moved to expand police funding.  She also said, “It’s time for the reign of criminals to end,” and called for law enforcement to become more aggressive.  Boudin opposed all of this.

The apple didn’t fall far from the ideological tree, in Boudin’s case.  His parents were leaders of the radical left-wing Weather Underground who spent decades in prison for their involvement in a 1981 robbery that ended with three people shot to death.  The question for San Francisco voters is whether they want the radical Left to stay in control of the criminal justice system in their city.  Does it hurt bad enough yet?  Or do you need more mass lootings, more concealed evidence, and more usurpations of state legislative power to convince you Chesa Boudin is on the wrong path and bad for your city?