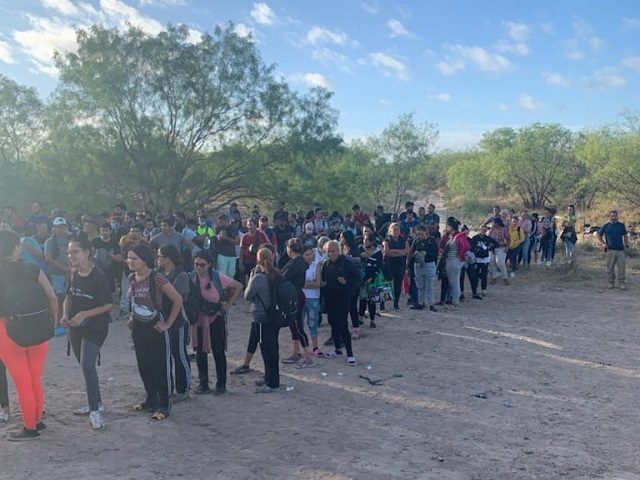 Del Rio Sector Border Patrol agents revealed to Breitbart Texas that record-amount migrant groups are moving across the Rio Grande from Mexico to Texas. A group of more than 300 crossed Tuesday night followed by an even larger one exceeding 400 on Wednesday. Migrants say the group sizes will continue to swell into the week.

A source operating under the umbrella of U.S. Customs and Border Protection told Breitbart Texas that already overwhelmed Border Patrol agents in the Del Rio Sector are now encountering record-setting migrant groups. The groups are crossing by the hundreds and effectively forcing Del Rio Sector officials to utilize all available resources to process and transport them.

On Tuesday night, a source said a group of 332 crossed into Eagle Pass, Texas. This was the largest ever to cross in this area in a single incident, the source stated. Agents identified the migrants as citizens of Cuba, Nicaragua, and Venezuela.

Wednesday morning, an even larger group crossed about 2.5 miles south of the Comino Real International Bridge, another source reported. As the group crossed the Rio Grande, the count rose to more than 400.

This group is also said to be composed of Cubans, Nicaraguans, and Venezuelans. The source said it appears some Hondurans are claiming to be citizens of Nicaragua to avoid removal under Title 42.

Migrants told Border Patrol agents an even larger group is staged on the Mexican side of the border river and will cross later in the day.

During the month of May, Del Rio Sector agents apprehended more than 44,000 migrants, Breitbart Texas reported. This represents more than 1,400 per day in this single border sector. It appears that record-setting level will be exceeded in June.