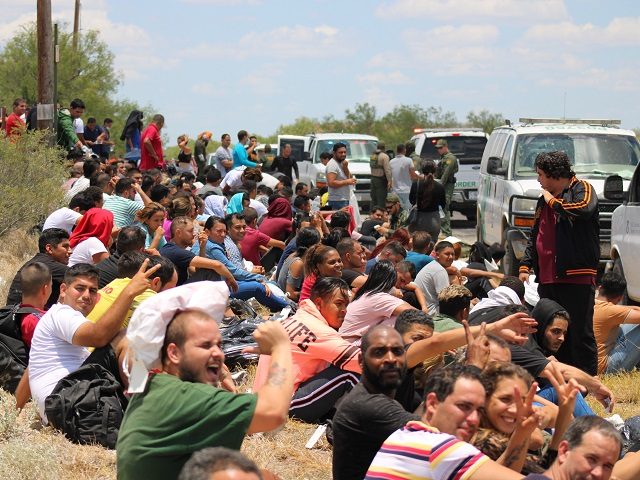 Eagle Pass, Texas — Del Rio Sector Border Patrol agents apprehended 1,772 migrants after they crossed the Rio Grande in a single day in Eagle Pass. The steady stream of migrants apprehended after crossing the river included one group numbering more than 500. On Thursday, the number of apprehensions exceeded any other single day total for the city according to the source.

A source operating under the umbrella of U.S. Customs and Border Protection told Breitbart Texas that Del Rio Sector agents lead the nation of late in apprehensions. The source said the increase in apprehensions is forcing the agency to deal with constant overcrowding at processing facilities. More than 2,000 migrants were arrested on Thursday throughout the Del Rio Sector — most chose to enter the United States in Eagle Pass.

The task of transporting the migrants from the apprehension point near the Rio Grande to a soft-sided processing center is stretching transportation resources to the breaking point. In addition, the source says the need to provide medical and humanitarian care along with processing the migrants mean most Border Patrol agents are not on routine field patrol, leaving the border wide open.

The CBP source, who is not authorized to speak to the media, told Breitbart Texas most of the encounters on Thursday were single adult migrants. In the largest group of migrants arrested, more than 400 of the 528 members of the migrant group were single adult males and females. The group was comprised of migrants from 14 different countries.

Nearly half of the group consisted of Venezuelan nationals. More than 150 migrants were from Cuba. More than 100 members of the groups were from Colombia, Peru, Nicaragua, Iran, the Dominican Republic, Ecuador, Chile, Honduras, Guatemala, Panama, and Mexico.

The source says the Border Patrol is seeing a flow of migrants from all parts of the world and has apprehended migrants in Eagle Pass from more than 100 unique countries this year. Arresting migrants from dozens of different countries each day has been the norm for the agency, according to the source.

Randy Clark is a 32-year veteran of the United States Border Patrol.  Prior to his retirement, he served as the Division Chief for Law Enforcement Operations, directing operations for nine Border Patrol Stations within the Del Rio, Texas, Sector. Follow him on Twitter @RandyClarkBBTX.