In May, former US Ambassador to Pakistan and the United Arab Emirates Richard Olson pleaded guilty to violating lobbying laws. He had received monthly payments of $20,000 from a Pakistani American businessman and “political fixer,” Imaad Zuberi, within one year of leaving his post. Zuberi was operating on behalf of Qatar and paid Olson to lobby for the Gulf state’s interests in a 2017 dispute with its neighbors.

The courts sentenced Zuberi to 12 years in prison and ordered him to pay $16 million in restitution and $2 million in fines for illegally sending millions of dollars from foreign sources to whichever political campaigns they believed would benefit them. In addition to Qatar, Zuberi’s clients included “the governments of Libya, Sri Lanka, Bahrain, Turkey, and a Ukrainian oligarch close to Vladimir Putin,” according to the Daily Mail.

The considerable power that foreign agents with such connections can easily exert is troubling, and connections between these agents and elected officials warrant deeper investigation.

One such potential relationship of interest is that between Representative Ilhan Omar and Tahir Javed, a Pakistani-American businessman, influential Democratic Party donor, and a liaison for Pakistan-US relations who was instrumental in the creation of the Pakistan Congressional Caucus.

Javed accompanied Omar on her recent controversial trip to Pakistan and Pakistan-occupied but Indian-claimed Azad Kashmir, a flashpoint territory that religious extremists rule.

His presence alongside the congresswoman indicates the continued growth of Pakistani influence operations and Islamist networks in the US. Similarly, Javed’s political connections lead to questions about his own agenda and influence, given the strict laws concerning foreign-sponsored lobbying in the United States.

Javed has long been regarded as a spokesperson for Islamabad. After President Joe Biden and Vice President Kamala Harris won the 2020 election, Javed conveyed then-Prime Minister Imran Khan’s congratulatory message to Harris and her husband. Javed also appears to have had a role in arranging a meeting between Khan and Senators Chris van Hollen and Maggie Hassan in 2019.

In March 2021, President of Pakistan Arif Alvi awarded Javed with the Tamgha-e-Imtiaz, a medal commending civilians or servicemembers for their service to Pakistan. A few months later, Javed hosted an event for the Pakistani governor of Punjab in Houston. 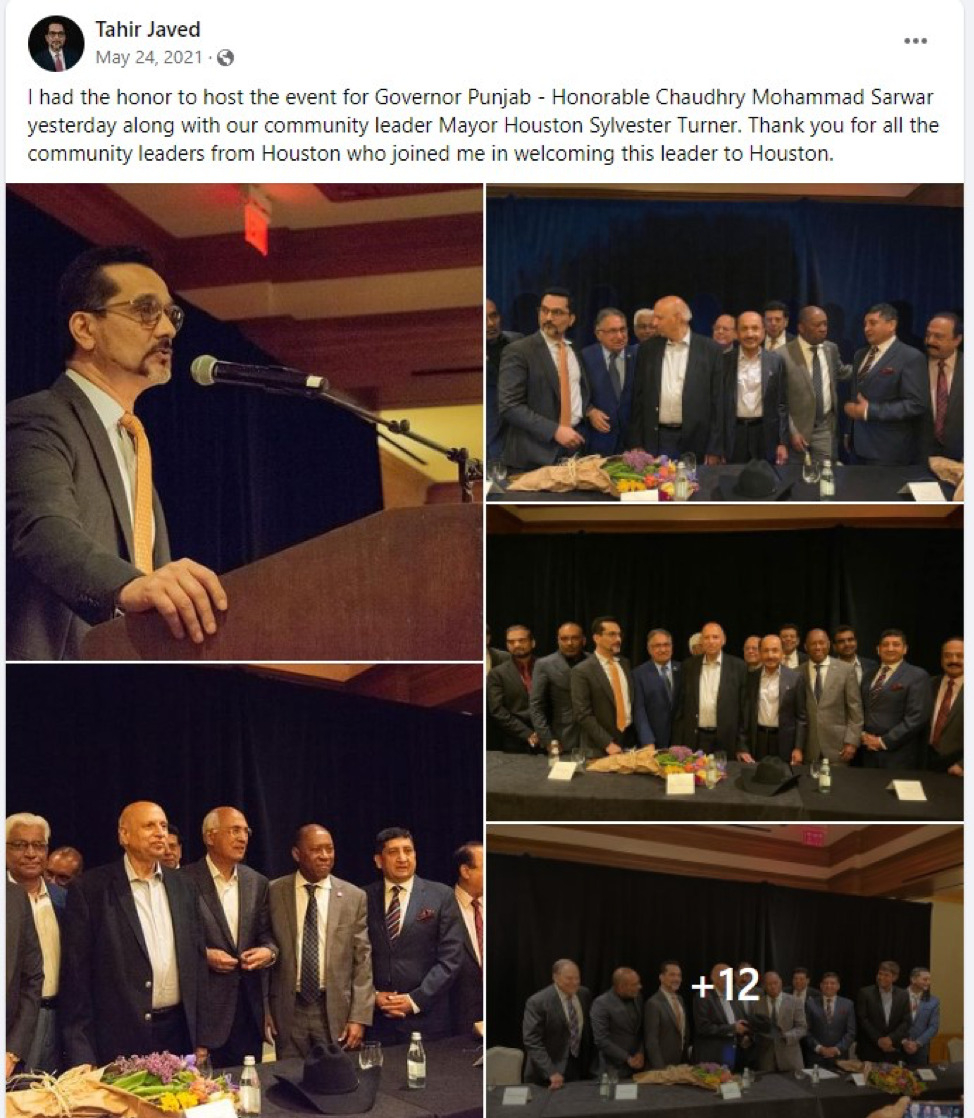 A self-described business magnate, Javed runs multiple companies in the US, including a healthcare conglomerate and a wholesale company.

Federal Election Commission data reveals the scope of Tahir Javed’s donations to the Democratic National Convention, of which he is the deputy national finance chair, as well as to other Democrat candidates, including Representative Sheila Jackson Lee, co-chair of the Congressional Pakistan Caucus Foundation (CPCF), and Ilhan Omar.

In 2020, Jackson Lee and her co-chair of the CPCF, Representative Jim Banks, spoke at an online event organized by Friends of Kashmir, an Islamist-linked registered US nonprofit, to mourn India’s annexation of Kashmir. The event also boasted speakers such as the now-former president of Pakistan-administered Kashmir, Sardar Masood Khan.

Friends of Kashmir and its head, Ghazala Habib, are supporters of Kashmiri terror activists who have founded and worked for violent Islamist movements. The Friends of Kashmir network is extensive and includes Sajjad Burki, the former president of the US chapter of Pakistan Tehreek-e-Insaaf (until recently the country’s ruling party).

Burki has long collaborated with Friends of Kashmir, co-organizing events. Javed appeared at one such event alongside Burki and Dawood Ghaznavi, the attorney for convicted jihadist Aafia Siddiqui.

Javed is also associated with the Association of Physicians of Pakistani Descent of North American (APPNA), attending a trip to the Bahamas alongside APPNA leaders. Former Prime Minister Imran Khan himself once addressed a meeting of APPNA and asked members to lobby on behalf of Pakistan, especially regarding Kashmir and Indian Muslims. He told them, “I don’t think you realize your lobbying strength. It is underutilized.” 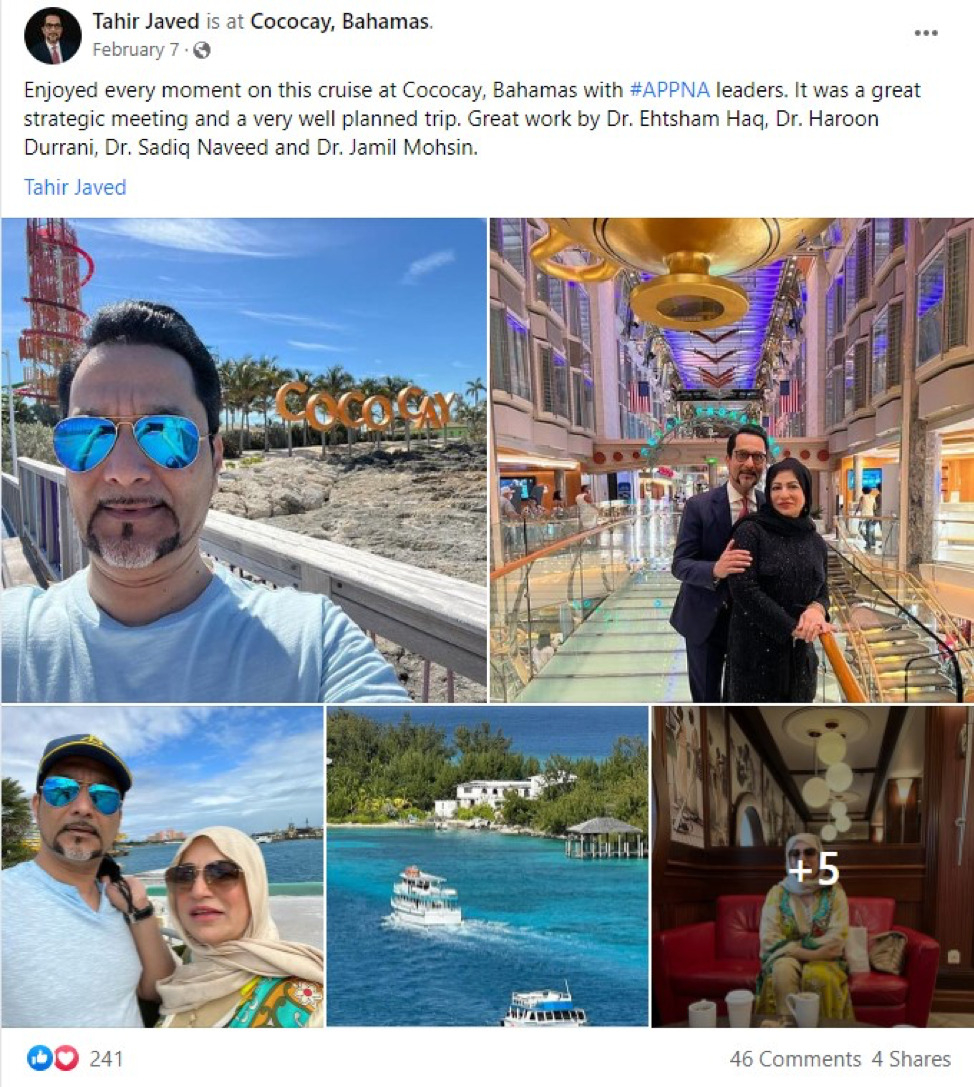 That Congresswoman Omar should choose such company is perhaps expected. She has worked with Islamist groups in the past.

In 2019, for instance, Omar came under fire for accepting an invitation to speak at an Islamic Relief USA (IRUSA) event alongside Yousef Abdallah, a prominent anti-Semite and former operations manager for IRUSA.

Israel and the UAE have banned Islamic Relief’s chapters in those countries for terror financing, and in 2020 the State Department condemned the organization’s UK headquarters for “blatant and horrifying anti-Semitism and glorification of violence.”

In 2021, the Council for American-Islamic Relations (CAIR) named Omar the American Muslim Public Servant of 2021. CAIR is a leading American Islamist organization that the UAE designated as a terrorist organization in 2015. In the 2018 election cycle, Omar received multiple donations from CAIR officials.

Increasingly, Omar has been working with South Asian Islamists as well. In 2018, she participated in a fundraising promotional video with the Islamic Council of North America (ICNA). ICNA is the US branch of Jamaat-e-Islami, a violent South Asian Islamist movement closely linked to a number of designated terrorist organizations.

ICNA’s sister organization, another US nonprofit named Helping Hand for Relief and Development (HHRD), has collaborated with the charitable arms of terrorist organizations such as Hizbul Mujahideen and Lashkar-e-Taiba.

Interestingly, Omar was pictured alongside Javed at the recent ICNA conference in Baltimore, MD.

In addition to Omar, Javed appears to be close with former Congressman Nicholas Lampson, who also accompanied Javed and Omar on their Pakistan trip. Lampson is currently the co-chief operations officer of Riceland Healthcare, where Javed is the chief executive officer. Lampson’s election campaigns in 2000 and 2012 received notable donations from a Muhammad Javed, whom one of Javed’s companies employs. In 2006, 2008, and 2012, Lampson received donations from officials of the Islamist group CAIR.

All in all, Javed’s political connections serve to strengthen Representative Omar’s ties to Islamist organizations and their foreign backers. Their influence and extent warrant deeper investigation into the possibility of foreign-sponsored lobbying in the US, which, as Zuberi’s case shows, can go unchecked for years.

Isabella Meibauer is a writer for Islamist Watch, a project of the Middle East Forum