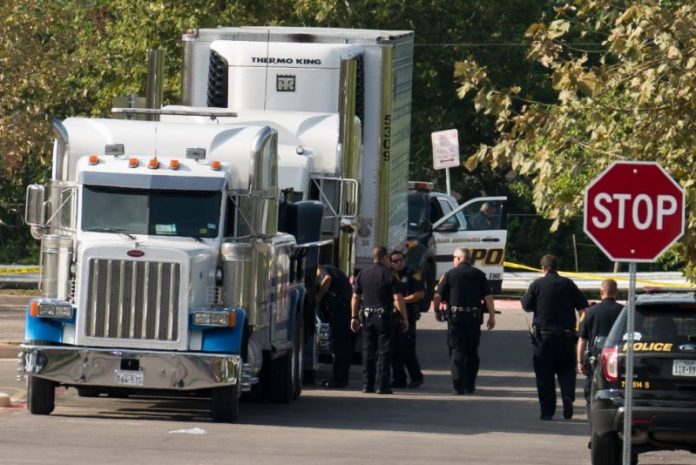 The truck, a black Chevrolet Silverado, arrived at the Border Patrol checkpoint on Texas Highway 65/180 when a drug-sniffing dog alerted agents.

The driver, a U.S. citizen, was ordered to undergo a secondary inspection, at which point he allegedly admitted that he had a small amount of marijuana and a pistol.

Agents then questioned about the content of the toolboxes, which were shut with padlocks.

The driver told agents he did not have the keys, prompting the agent to cut the locks.

Agents said three men were inside the toolboxes, including two in one, with restricted oxygen and no means to escape.

The migrants were medically evaluated and were determined to be in good condition.

Agents arrested the driver on suspicion of conspiracy to transport migrants.

The U.S. Border Patrol said the incident was one of 25 disrupted human smuggling attempts that resulted in the rescue of 170 migrants in seven days in the El Paso Sector.

“Endangering human lives by using dangerous (and) despicable smuggling tactics is the modus operandi of transnational criminal organizations. Many times smuggled migrants are locked in confined spaces with restricted oxygen,” El Paso Sector Chief Patrol Agent Gloria I. Chavez said in a statement. “I am extremely proud of the actions of our El Paso Sector Border Patrol agents as they often encounter high-risk situations, where if not for their dedication and intervention, events as these would turn into tragedies. Our Border Patrol Agents are true heroes as they display compassion and professionalism every day.”