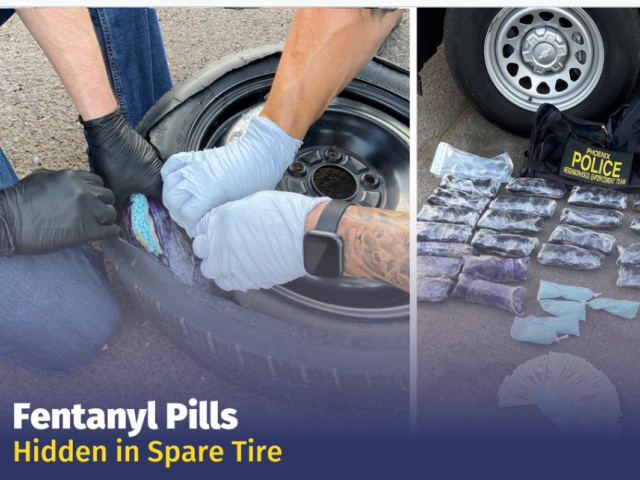 Police found a huge number of suspected fentanyl pills tucked inside a spare tire in Phoenix, Arizona, during a recent investigation.

Phoenix Police shared photos of the tire and the plastic bags containing what appeared to be the blue pills:

While working an illegal drug investigation, #PHXPD600NET took a total of 166,000 suspected fentanyl pills of the streets of #PHX near 27th Ave/Bethany Home on Wednesday. 20yo, Alexa Magana was booked for possession & transportation of narcotic drugs for sale. #GoodPoliceWork pic.twitter.com/bTL39WHGd3

The agency said 20-year-old Alexa Magana was booked for possession and transportation of narcotic drugs for sale.

Fentanyl was described as a synthetic opioid, according to the National Institute on Drug Abuse.

“Some drug dealers are mixing fentanyl with other drugs, such as heroin, cocaine, methamphetamine, and MDMA. This is because it takes very little to produce a high with fentanyl, making it a cheaper option,” the institute continued:

This is especially risky when people taking drugs don’t realize they might contain fentanyl as a cheap but dangerous additive. They might be taking stronger opioids than their bodies are used to and can be more likely to overdose.
…

Like heroin, morphine, and other opioid drugs, fentanyl works by binding to the body’s opioid receptors, which are found in areas of the brain that control pain and emotions. After taking opioids many times, the brain adapts to the drug, diminishing its sensitivity, making it hard to feel pleasure from anything besides the drug.

Deaths from drug overdoses rose 15 percent during President Joe Biden’s first year on the job, data from the Centers for Disease Control and Prevention (CDC) revealed, Breitbart News reported May 11.