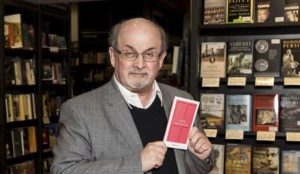 The stabbing of Salman Rushdie by an open supporter of the Islamic Republic of Iran, who ingenuously explained that he attacked the famed writer because he “insulted Islam,” has put much of the Leftist intelligentsia in the West in a tough position. For years they’ve been insisting that any criticism of Islam, including any opposition to jihad violence, is “Islamophobic.” Even to stand against Sharia oppression of women is to manifest a “white savior complex.” Yet now the world’s most renowned insulter of Islam has been critically injured for it. How can a good Leftist stand with Rushdie and yet maintain his or her or xis credentials as a staunch foe of “Islamophobia”? The New Yorker has come to the rescue.

Longtime New Yorker staff writer Adam Gopnik begins by declaring that the attack on Rushdie was “triply horrific to contemplate,” because of its “sheer brutality and cruelty,” as well as “in the madness of its meaning and a reminder of the power of religious fanaticism to move people,” and “because it had seemed to those who knew him that the fatwa had faded in significance and threat.” Gopnik is most intent, however, on demonstrating that the attack didn’t even have the justification of being a response to blasphemy against Islam because Rushdie hadn’t really insulted Islam at all.

Gopnik thus notes that “the evil absurdity of the death sentence pronounced on Rushdie for having written a book actually more exploratory than sacrilegious—in no sense an anti-Muslim invective, but a kind of magical-realist meditation on themes from the Quran—was always obvious.” Gopnik then hastens to assure us that he doesn’t mean that Rushdie deserved to be attacked if he had actually written an “anti-Muslim invective: “Of course, Rushdie should have been equally invulnerable to persecution had he written an actual anti-Muslim—or an anti-Christian—diatribe, but, as it happens, he hadn’t.” OK, fine — but despite the fact that he has made his point, Gopnik continues to go out of his way to emphasize that neither Rushdie nor The Satanic Verses are anti-Islam.

The New York article then invokes Seyed Mohammad Marandi, “a figure involved in the U.S.-Iran nuclear negotiations,” who “announced on Twitter that he ‘won’t be shedding tears for a writer who spouts endless hatred & contempt for Muslims & Islam.’” Gopnik adds: “Of course, Rushdie did no such thing.”

Right. And not only that, but “we met when we walked through the great 1992 Matisse show at moma together, at the height of the threat, and he was full of delight in each painting as it passed, with a nice, fully developed if slightly ironic sense of how much Matisse had drawn on Islamic civilization, on Persian ornaments and North African textiles, for his inspiration.” So not only is Salman Rushdie not an “Islamophobe,” but Gopnik tells us this to show that Rushdie positively admires Islam and Islamic culture, with the unspoken “Isn’t that wonderful?” hovering in the air above the text.

There is more. Read the rest here.