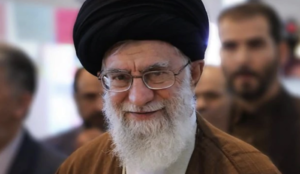 Biden’s handlers are so desperate to erase all traces of the Trump presidency that they’re pursuing a deal with the Iranian mullahs despite the potentially catastrophic cost, and Iran’s increasing aggression and hostility.

“After 16 Months, Some Glimmers of Optimism About Iran Nuclear Deal“

This is where you’d put a confused face emoji.

Why? Because one of the above headlines is unlike the others. The first two stories reveal the nature of the Iranian regime—a gang of criminal theocrats that since 1979 has spread chaos and murder throughout the world. The third headline reveals the gullibility of Western politicians and diplomats who, despite never-ending reminders of the Islamic Republic’s aims and capacities, persist in trying to appease it.

Negotiations to revive the Iran nuclear deal have been taking place in Vienna since April 2021. They have gone nowhere. Yet the Biden administration insists on playing a starring role in this diplomatic farce. Nothing that happens in the outside world penetrates the bubble where the diplomats reside.

• Iran refused to speak to the United States directly. We obliged. The talks are indirect—a sign of American weakness.

• Ali Khamenei ensured that his potential successor, Ebrahim Raisi, a hardline cleric sanctioned by the United States, was “elected” president last summer. Not only did we continue negotiations. We are also now debating whether to provide Raisi an entry visa so he can spout regime propaganda at the U.N. General Assembly next month.

• America’s withdrawal from Afghanistan, one year old this week, seriously undermined our credibility and our security. It weakened our influence in the Greater Middle East. Yet Biden didn’t change his foreign policy. He doubled down on his Iran gambit.

• Russia’s invasion of Ukraine last February was a hinge of history—a moment when, we have been told, “everything” changed. Everything but the Iran negotiations. Russia, despite its outlaw status on the international stage, continues to serve as Iran’s intermediary. Maybe we should take the hint?…

Trudeau’s Trucker Terrorists: Why The Emergency Powers Endanger The Rights Of All Groups