Book Tom Trento to Speak at your event!

Tom will respond as quickly as possible.  Thank you, in advance, for your request.

UTT provides threat-focused strategic and operational consultation, education, and training for federal, state, and local leadership and agencies in government, the private sector, and for private citizens. UTT is the only organization in America which empowers elected officials, police and citizens with tools to identify Marxist/communist and jihadi networks and dismantle them at the local level.

Dr. Kirby’s timely book anticipated the 2020 election season to come with a consideration of how starkly Islamic Law differs from the U.S. Constitution in a work that is at once informative, sober, and scholarly.

Building on a series of essays that author and scholar Dr. Kirby first published at PipelineNews.org, this new book from the Center for Security Policy expands on the myriad ways in which Islamic Law (shariah) is antithetical to the U.S. Constitution. After introducing an overview of Islamic doctrine in brief form, Dr. Kirby then focuses on six key Amendments to the Constitution as enshrined in the Bill of Rights. In choosing these six, he both educates and horrifies any who may not have been aware of the sheer physical brutality of shariah, even aside from its explicit and tyrannical antipathy to individual liberty, free speech, and concepts such as equality of all before the rule of man-made law and government by consent of the governed.

The publication of Dr. Kirby’s book could hardly be more timely, as Muslim Brotherhood/HAMAS front groups such as CAIR (Council on American Islamic Relations) and its affiliate at Jetpac, Inc. make no secret of their intention to seed this country’s political electoral process with selected, vetted, and groomed candidates who are aligned with the Brotherhood’s jihadist agenda to foist shariah on an unwilling—but all-too-often unaware–-American electorate. Written in a lucid, readable style that takes the Bill of Rights Amendments 1, 2, 4, 8, 13, and 14 in turn to contrast them with the utter lack of those Amendments’ protections under shariah,  Islamic Doctrine versus The U.S. Constitution: The Dilemma for Muslim Public Officials provides a useful handbook for the patriot citizen who understand that shariah is antithetical to the Constitution, but would like some additional pointers to rebut the plethora of Islamic apologists and taqiyya operatives out there.

The final chapter of the monograph offers even more specific ideas for those who may attend an upcoming rally, speech, or townhall featuring a Muslim candidate for office at whatever level, from local to the U.S. Congress. Here, Dr. Kirby provides a set possible questions that might be posed (with courtesy and respect) to such a candidate to help discern exactly where that candidate stands with respect to the obligatory adherence to shariah that is binding on all Muslims.

Educate/Motivate/Activate   We are in WWIII and we ALL MUST understand America is under siege!  The Red-Green Alliance and Jihad/Shariah/Marxists work together and separately to destroy the Judeo-Christian Constitution that founded America!

We hope these resources will be utilized widely and often!

If you have valued resources that need to be added, please send an email to:  tuw@theunitedwest.org 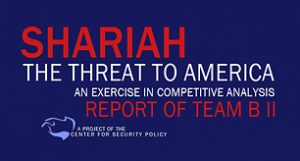 Shariah The Threat to America is the result of months of analysis, discussion and drafting by a group of top security policy experts concerned with the preeminent totalitarian threat of our time: the legal-political-military doctrine known within Islam as “shariah.”

It is designed to provide a comprehensive and articulate second opinion on the official characterizations and assessments of this threat as put forth by the United States government.

Listen to Podcasts under:  ON-DEMAND EPISODES

UPCOMING BROADCASTS are the next day’s planned broadcast.


DISCLAIMER:
One of the objectives of THE UNITED WEST website is to stimulate critical thinking on controversial issues. Therefore, the views of the postings may not reflect the position of THE UNITED WEST.
FOLLOW US
© The United West 2022 | Powered by Patriotic Americans