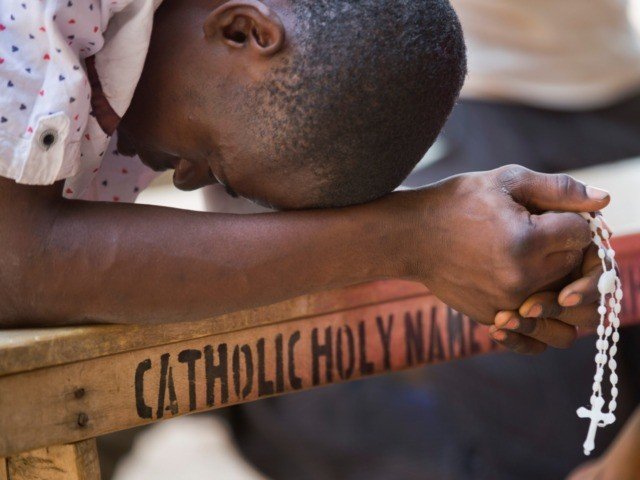 TUW Media Commentary:  Nigeria Catholic Seminarian Executed by Islamists, but the Minnesota Catholic Archdiocese promotes Islam and demands a Priest apologizes “for saying in a sermon that Islam was ‘the greatest threat in the world’ to the United States and Christianity.”  When will the Catholic leadership recognize the threats and stand against it to protect it’s faithful?  Probably not as long as the current Pope is in place.

One of the four Catholic seminarians abducted by unidentified gunmen last month in Nigeria was found dead Saturday afternoon.

As Breitbart News reported last month, gunmen stormed the Good Shepherd Catholic Major Seminary in Kaduna State, central Nigeria, on January 8, kidnapping four seminary students. Wearing military fatigues, the assailants arrived at the seminary around 10:30pm and began shooting at students, professors, and staff members, in a raid that lasted about a half hour.

While the identity of the kidnappers is still unclear, a recent string of violent acts against Christians by Muslim radicals in central Nigeria suggests the attack was religiously motivated.

In its report on the incident, Vatican News adopted this theory, noting that the attack “was all too familiar in a region where Boko Haram and other Islamist groups use brutal and brazen methods to reinforce their reign of terror.”

The jihadists engage in kidnapping as a means of attracting media attention to their cause as well as forced recruitment to their ranks, Vatican News noted, but also as a means of financing their operations through ransom demands.

In its World Watch List 2020, Christian persecution watchdog group Open Doors placed Nigeria at number 12 of the 50 countries with the highest rates of persecution.

“Christians in the northern region and in the Middle Belt suffer from violence perpetrated by Islamic extremist groups such as militant Fulani herdsmen and Boko Haram,” the report stated. “Such violence often results in loss of life, physical injury, as well as loss of property.”

“As a result of the violence, Christians are also being dispossessed of their land and means of livelihood—and Christians with a Muslim background also face rejection from their own families,” it noted.

The Bishop of Sokoto said he had to delay the announcement of the death of Michael Nnadi until he could inform the young man’s mother. “The Lord knows what is best, let us stay strong and pray for the repose of his soul,” the bishop wrote.

Thomas Heine-Geldern, president of the Pontifical Foundation Aid to the Church in Need (ACN) International, said on last month that the situation of Christians in Nigeria resembles what the faithful suffered under the Islamic State in the Middle East.

“In that situation, Christians were kidnapped, assaulted, and killed because they had no protection from the State. This should not be allowed to happen to Christians in Nigeria. The government has to act now before it is too late,” Heine-Geldern stated.