San Francisco district attorney and George Soros darling Chesa Boudin went down in flames Tuesday evening, recalled by double-digits in ultra-liberal San Francisco, a far larger margin than the less than 2 percent of voters who carried him to victory three years ago.

Tuesday’s outcome tracks months of polling showing San Franciscans’ opposition to Boudin, with the recall consistently commanding a large advantage, and even a Boudin campaign poll showing a tied race. The result also follows voters’ decision to recall three ultra-woke school board members, with whose progressive project Boudin is often identified. The San Francisco Chronicle projected that Boudin would be removed within minutes of the polls closing on Tuesday night.

Boudin’s defeat will likely be seen as part of a broader backlash against criminal justice progressivism—one that has installed Democratic New York City mayor Eric Adams in Gracie Mansion, put moderate Rick Caruso neck and neck with far-left Karen Bass for the mayoralty of Los Angeles, and produced an about-face from municipal Democrats across the country. This backlash is a response to surging violent crime rates, which spiked in the wake of the “Defund the Police” movement and has driven the homicide rate to record highs.

Though this movement is doubtless part of Boudin’s loss, Tuesday’s results tell us something else. Specifically, San Francisco voters were responding not so much to violent crime—with which the city has struggled less than others—as to disorder, which has become rampant. Boudin’s now-former jurisdiction has become infamous for rapidly growing homelessness, public defecation, and organized shoplifting which has shuttered some retailers. The situation has become so hostile that numerous companies have decamped to redder states, citing relative quality of life.

Boudin, however, long maintained that he had no role in addressing such issues. If Boudin’s brand of progressivism sets itself against the idea of addressing “broken windows” problems, then his recall is decisive evidence that the public still wants them fixed.

Supporting the recall, San Franciscans have of course cited surging crime. Brooke Jenkins, a prosecutor who left Boudin’s office to campaign against him, told the San Francisco Chronicle she agreed with Boudin’s progressive project, but that “people have said, ‘Wait a minute. What we didn’t sign up for is rampant crime.’” Asian residents were the group most likely to support the recall in one poll, presumably in response to the wave of anti-Asian bias crime that has swept the city over the past several years.

Central to the recall campaign’s messaging was a series of high-profile murders, including the New Year’s Eve hit-and-run by a Boudin-released serial offender that left two women dead. Nima Rahimi, a member of the California Democratic Party’s executive board, cited the incident to explain why she would be voting against Boudin. 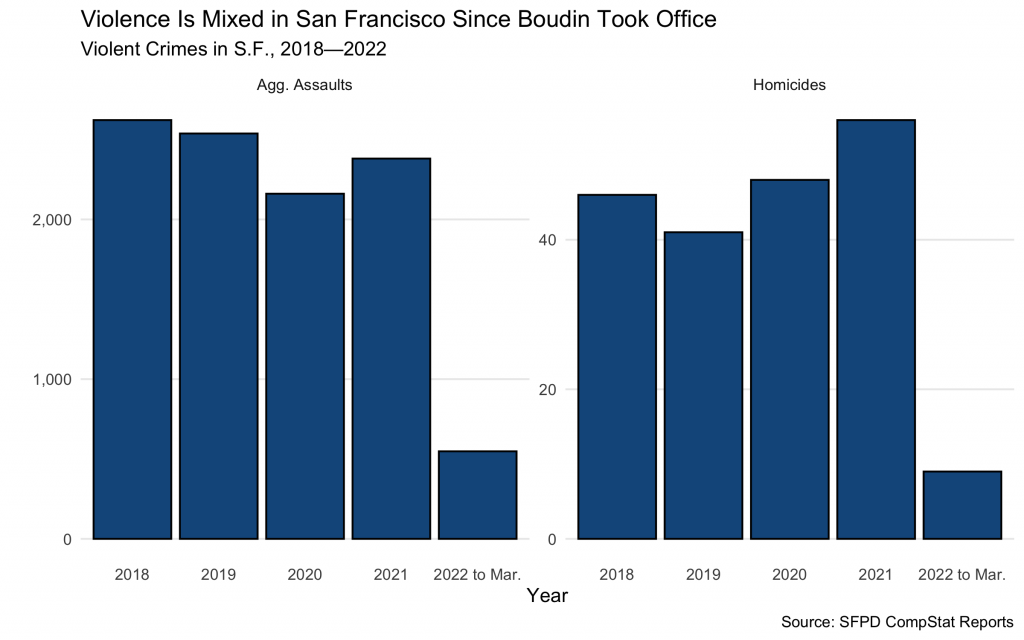 But it’s hard to argue the recall was about violent crime alone. Relative to other cities, violence is not San Francisco’s problem. Many American municipalities saw rates of shootings and homicide break records in 2020 and 2021. In San Francisco, by contrast, homicides are only slightly elevated above pre-Boudin levels, while aggravated assaults—a proxy for shootings—are below where they were.

What voters may be identifying as crime, rather, is the visible signs of disorder that have become the city’s defining trait. Shoplifting has been rising steadily since 2015 and surged to new highs in 2021. The city has a larger homeless population than any city except New York, which has 10 times San Francisco’s population. And while most homeless in New York City are sheltered, more than 80 percent of San Francisco’s homeless population were unsheltered as of January 2020. Public drug use is endemic, including on the subway and in the infamous Tenderloin district, resulting in a 125 percent increase in overdose deaths in 2020 versus 2018.

In spite of this, during his 2020 campaign Boudin promised not to prosecute “quality-of-life crimes,” including “public camping, offering or soliciting sex, public urination, blocking a sidewalk.” In office, he undercharged drug dealing, partially because more charges could lead to the deportation of dealers. During his first year in office, two-thirds of petty theft offenders were diverted from prosecution, a 23-percentage-point increase over his predecessor, the similarly progressive Los Angeles district attorney George Gascon.

For a generation, Boudin’s theory—that quality-of-life and public disorder are not the problem of the criminal justice system—has been the conventional wisdom among activists, academics, and even many politicians. Those who identify San Francisco’s disorder as an issue are regularly tarred as racists and bigots, unwilling to treat their neighbors with compassion.

Yet it was not so long ago that researchers recognized that disorder was far more important to the voting public than relatively small, highly concentrated violent offenses. In the 1982 Atlantic article in which they coined the term “broken windows,” George L. Kelling and James Q. Wilson observed that community fear was alleviated as much by order enforcement as by preventing violent crime, and that alleviating that fear was both a necessary predicate of crime control and the essential function of the police. In a 2006 survey of some 2,500 Chicago police-community meetings, criminologist Wesley Skogan observed that residents were far more likely to bring up concerns about loitering, prostitution, and public drinking (36 percent of complaints) or street drug sales (24 percent) than individually victimizing crimes (9 percent, tied with parking and traffic problems).

Disorder remains a major concern today. In a poll of big-city dwellers commissioned by my colleagues at the Manhattan Institute, 73 percent of respondents supported empowering police officers to “be more responsive” to “graffiti, public urination, and littering.” Seventy-one percent supported letting cops clear homeless encampments assuming residents are given access to social services and shelter. Seventy-seven percent of respondents in San Francisco specifically were “extremely” or “very” concerned about homelessness, the same share who supported more quality-of-life enforcement.

Disorder matters to the voters of America’s big cities. They want safety, but they also want to live in cities in which public urination and drug use are sanctioned, in which the homeless and mentally ill are cared for through compulsion if necessary, rather than “liberated” to live on the street. Boudin’s defeat on Tuesday should be a warning to leaders who abdicate these responsibilities and dismiss as prejudiced anyone who objects—watch out, your job might be next.