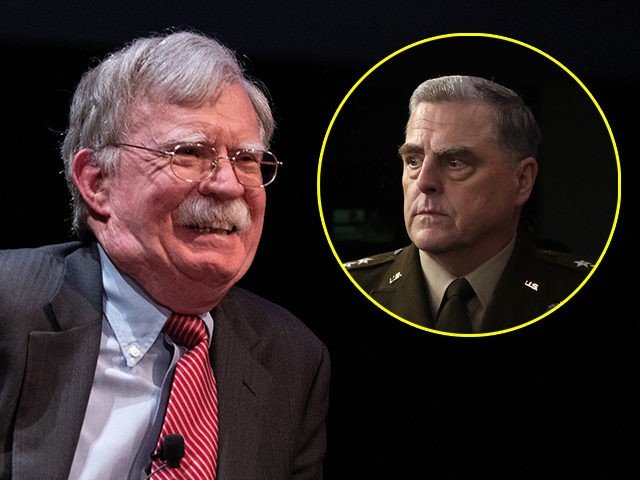 Former National Security Advisor John Bolton expressed support for Chairman of the Joint Chiefs of Staff Gen. Mark Milley following a bombshell report alleging that Milley secretly told a Chinese official that he would provide advance notice of a possible attack to the communist regime.

“Mark Milley is a staunch supporter of the Constitution and the rule of law. His patriotism is unquestioned. In the days after Donald Trump’s November 3, 2020, election defeat, I can only imagine the pressures he and others were under in fulfilling their Constitutional obligations,” Bolton said in a Wednesday statement. “I have no doubt General Milley consulted widely with his colleagues on the National Security Council and others during this period. I would be very surprised if many of them were not fully away of General Milley’s actions, and they fully concurred in them.”

John Bolton backs Gen. Milley: “Mark Milley is a staunch supporter of the Constitution and the rule of law. His patriotism is unquestioned.” Full statement follows: pic.twitter.com/vwEIxUVJcA

In the forthcoming book “Peril,” written by Washington Post reporters Bob Woodward and Robert Costa, Milley warned China’s Gen. Li Zuocheng that he would provide advance warning if President Trump ordered an attack on the communist regime. Milley made a pair of calls to Zuocheng, one on October 30th, 2020 and the other on January 8th, 2021. Additionally, Woodward and Costa reported that Milley believed that Trump was in mental decline, a viewpoint he conveyed to House Speaker Nancy Pelosi (D-CA) during a January 8th phone call. The speaker reportedly agreed with the general’s claims.

Trump responded Tuesday with a sharply worded statement dismissing Milley as a “Dumbass,” and insisting he never considered attacking China.

Still, he said that if the report was true, “I assume he would be tried for TREASON in that he would have been dealing with his Chinese counterpart behind the President’s back and telling China that he would be giving them notification ‘of an attack.’ Can’t do that!”

The Associated Press contributed to this report.

NOTE:  The United West is in full agreement with President Trump in regards to Milley and consider anyone who “defends” Milley to be in that same category!

CAIR Condemns 19th Century Slavery in the United States, But What About Muhammad?

New physicians’ alliance: Hospitals are killing people, doctors are being ‘hamstrung’ by regulators, leading to ‘hundreds of thousands of excess unnecessary deaths’