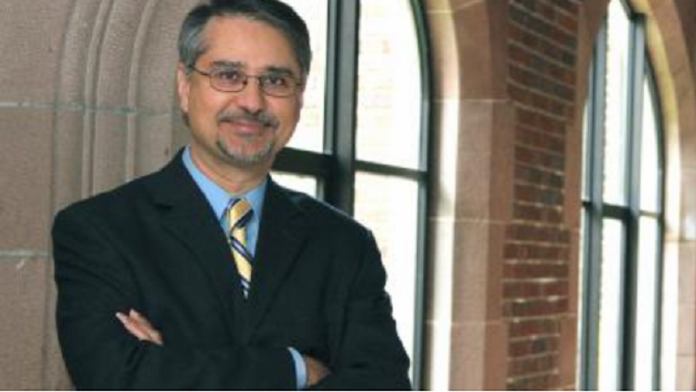 The peculiar worldview of Sohail Hashmi.

Islamic scholars historically have placed “too much emphasis on jihad as basically a violent” rather than nonviolent doctrine, stated Mount Holyoke College international relations professor Sohail Hashmi in an April 11 webinar. Hosted by the Muslim group Critical Connections in Hashmi’s Pioneer Valley region of Massachusetts, his lucid lecture on “Jihad vs Just War: A Comparative Analysis” provided detailed, disturbing insight into Islamic doctrines of jihad warfare.

As in a previously analyzed webinar, Critical Connections founder Mehlaqa Samdani moderated and worried in her introduction about “Islamophobic groups” dominating discussion of hot-button issues like jihad. Her “Islamophobia” reference ironically recalled the religiously repressive nature of the terrorism-sponsoring Islamic Republic of Pakistan, the home of her co-moderator, Karachi University student Rutaba Tariq. She represented Pakistan’s branch of the Model Organization of Islamic Cooperation (MOIC), a student affiliate of the OIC, whose fifty-seven member states (including “Palestine”) have long sought to ban “Islamophobic” criticism of Islam worldwide. While Hashmi took no critical notice of the OIC, she encouraged viewers to join MOIC; additionally, Georgetown University professor John L. Esposito, an apologist for these efforts and all things Islamist, made a brief cameo appearance.

Yet Hashmi’s presentation did not deny that serious concerns about jihad are well-founded, not irrational, even as he claimed that Christian just war and Islamic jihad doctrines are “extremely alike.” He argued that Jesus’ teachings in the New Testament are “very heavily biased in the pacifist direction,” such that Christian thinkers developed just war theory largely on the basis of self-defense in natural law. More disturbingly, although “jihad is a very broad concept,” which “means simply to struggle,” in the eighth-ninth centuries Islam’s “classical jurists spent most of their time talking about what we could call an expansionist or an offensive jihad.”

This was a “jihad to expand the Islamic empire, to expand the realm of Dar al-Islam,” Hashmi noted. The “fundamental aspect of Dar al-Islam is that this is the territory where Islamic law is supreme” and “Muslims are not necessarily the majority.” Thus Muslim-conquered areas like Mesopotamia and Egypt “remained primarily non-Muslim for centuries,” he explained.

This “imperialist jihad” in the classical view, Hashmi explained, would supposedly benefit non-Muslim “benighted peoples.” “Once non-Muslims had lived under the benefits of this divine law, of this Islamic law, they would of their own accord realize the merits of Islam, the religion, and they would of their own accord, of their own free will, convert to Islam,” he said. He later specified how the modern Islamic Republic of Iran’s constitution advocates the “spread of an Islamic community of nations.”

Jihad conquests obviously violate modern norms, Hashmi analyzed. “Within the UN Charter, which is, of course, the ultimate expression of international law and, one could say, the ultimate result of the evolution of just war thinking in Western societies, there is no room at all for a war of imperialism.” After “tremendous discussion and indeed reinterpretation and reform” therefore “today most Muslim scholars are taking great pains to define the legitimate causes for jihad as being strictly self-defense,” he added.

Irrespective of these discussions about offensive jihad, Hashmi emphasized that modern jihadists in groups such as the Islamic State “are “overwhelmingly obsessed with defensive warfare.” This conclusion shocks Americans and others, he noted, who think of modern jihadist outrages such as Al Qaeda’s 9/11 attacks. However, these attacks served jihadists whose “first and foremost goal is to overthrow” in Muslim-majority states what jihadists view as “only nominally Muslim rulers and Muslim governments” often backed by countries such as America.

In this alliance of a foreign “far enemy” and a “near enemy” of non-sharia compliant states in Muslim lands, jihadists feel that “these governments have declared war on Islam and against true Muslims,” Hashmi explained. Osama bin Laden therefore argued that the “there was no way to fight the near enemy unless the far enemy could be pushed out of Muslim lands.” As Hashmi stated alarmingly, the “militant discourses on jihad, they are in fact quite conservative, they are not radical at all,” and are “very much in line with classical defensive jihad discourses.”

By contrast, Hashmi stressed that jihadist terrorism tactics had brought widespread condemnation from modern Muslim scholars. Between combatants and noncombatants, the “principle of discrimination is discussed widely in the classical works on fiqh” or Islamic jurisprudence, he noted, and thus jihad “is never unrestrained warfare.” But for modern jihadists, “because jihad is being waged for such lofty purposes, any and all means may be used to pursue it,” he stated, which recalled jihadist resort to the Islamic doctrines of necessity.

Some Muslim states seem to have other understandings of jihad in areas such as biological, chemical, and nuclear weapons possession. “Muslims should categorically reject any attempt to incorporate weapons of mass destruction into jihad thinking,” he said, but the nuclear weapons state Pakistan, and the nuclear proliferator Iran, seem to disagree. He also noted that in jihad doctrine Muslims had the option of enslaving the women and children of “non-Muslim combatants,” an uncomfortable reminder of recent Islamic State horrors.

Hashmi’s review of jihadist doctrine made his humanistic desires for Islam a bit like a pious hope. He highlighted the division between the Quran’s verses reflecting Islam’s prophet Muhammad as a preacher in seventh-century Mecca and the chronologically later, more warlike verses about Muhammad as a military-political leader in Medina. Muhammad in Mecca “understood jihad in line with Quranic revelations as essentially nonviolent direct action,” Hashmi stated; correspondingly “jihad is both the use of soft power as well as hard power.”

His clear sympathies for Islamic law shone through in his comments on Pakistan’s founding father, Muhammad Iqbal. “If anything, I would consider myself to be an accommodationist, in the line of Mohammed Iqbal,” Hashmi said. “There is something particular about relations between Muslims, and these responsibilities, are not captured by the current state of international law that has state sovereignty at its core.”

Nonetheless, Hashmi provided, perhaps unintentionally, glimpses of jihadist danger all too rare in the academic field of Middle East studies, saturated as it is with deceptive, biased scholarship. Rather than naïve falsehoods, he proffered sobering facts, even if his equation of jihad and just war is too optimistic. His scholarship should at least be the beginning of the end of illusions about jihad.