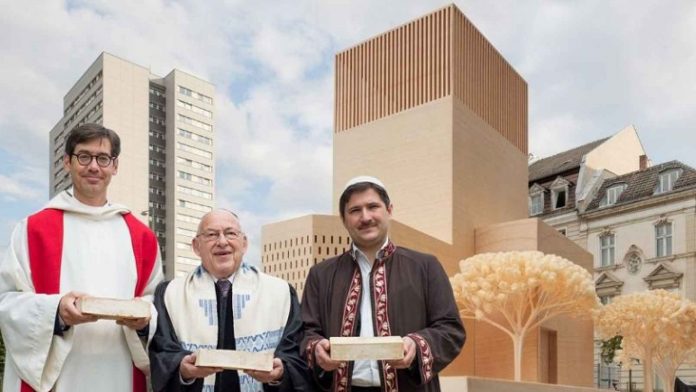 Terrorists are going to do what they’re going to do, but at last sensible, reasonable people of all three great Abrahamic faith traditions are doing their best to overcome ancient enmities and walk together into the glorious multicultural future. Church Militant reported Thursday: “In a historic first Thursday, a coalition of Jews, Christians and Muslims laid the foundation stone of a 47-million-euro interfaith shrine on the ruins of the 12th century St. Peter’s Catholic Church in Berlin. Hailed by the Vatican as a ‘house of prayer bringing the three world religions together under one roof,’…the House of One anticipates Pope Francis’ own pet project of an Abrahamic House.” This will fix everything, won’t it?

The German government is betting heavily on its doing so. Church Militant noted that “federal and state governments are pouring 30 million euro of taxpayer cash into the edifice, besides financing several staff positions including a social media team. Private donors are supplementing the remaining costs.”

The Roman Catholic Archdiocese of Berlin is also heavily invested in the project. The Catholic Saint Hedwig Centre explained: “The archbishop of Berlin is not a sponsor but is linked to the project. Archbishop Heiner Koch is a member of the foundation’s board of trustees.” Koch said that the House of One would “enable a dialogue process that does not exclude the intellectually critical.

Meanwhile, the papacy’s L’Osservatore Romano was enthusiastic, calling the House of One an “innovative project that creates a common space for the three great, monotheistic religions.” Christian Wulff, who served in the largely ceremonial position of president of Germany from 2010 to 2012, said that those who opposed the House of One should go read Pope Francis’ encyclical Fratelli Tutti. Wulff declared: “I think it is very helpful for the concept of the ‘House of One’ — especially the pope’s advice that God loves all people regardless of their religious affiliation.”

Yeah, well, Wulff, that’s not really the issue that is in doubt here. The non-Muslims involved in this project have no idea of how they’re being played, and would accuse anyone who tried to explain it to them of “Islamophobia.” But nonetheless, the reality is that this is a deceptive project that will not lead to any good outcome. It is a manifestation of this Qur’an verse: “And do not argue with the People of the Book except in a way that is best, except for those who commit injustice among them, and say, ‘We believe in that which has been revealed to us and revealed to you. And our God and your God is one; and we are Muslims to Him.” (Qur’an 29:46)

This may appear to be a generous statement of interfaith understanding, but it is actually an example of Islamic proselytizing. Muslim Brotherhood theorist Sayyid Qutb explained what is behind it: “The chasm between Islam and Jahiliyyah [the society of unbelievers] is great, and a bridge is not to be built across it so that the people on the two sides may mix with each other, but only so that the people of Jahiliyyah may come over to Islam.” Dialogue, in other words, is a means of dawah, Islamic proselytizing, not a genuine discussion or exchange. The proclamation that we all believe in the same God is a prelude to the appeal to accept Muhammad as a prophet and the Qur’an as a holy book.

Meanwhile, in this building, presumably the Gospel will be proclaimed, as well as the Qur’an. In the Qur’an, the Virgin Mary gives birth to Jesus, but it is stated that he is not the Son of God (19:35), not divine (5:17), and was not crucified (4:157), and thus could not be and is not the savior and redeemer of the world. This will be a decidedly mixed message. If past experience of “interfaith dialogue” is any guide, it will be resolved by the Christians toning down proclamation of the distinctive aspects of their faith so as to avoid offending the Muslims. This will make their proclamation closer to Islam in its character, as all will be left will be a declaration of monotheism and little else, and this will be viewed by the Muslim party as a victory of their proselytizing and sign of the submission of the Christians required in Qur’an 9:29.

That epitomizes the futility and self-defeating nature of this dialogue. It won’t save a single Christian from persecution or a single church from being destroyed. This interfaith “temple” will make the Jews and Christians feel good about their openness and generosity, and the Muslims think they’re making progress in proselytizing. It will fuel all the worst impulses in Islam for supremacism and the superseding and replacement of Judaism and Christianity. As the non-Muslims go to the House of One to celebrate diversity, they will find the ground quickly and efficiently cut out from under their feet.